Lake Garda, in Northern Italy, is a spectacular location, surrounded by mountains, picturesque towns, roads, beaches, hills, and nature at its best. You can discover and explore many historical sites, from ancient ruins to castles, villas, caves, and islands. Therefore, Lake Garda is a place you should not miss, and you can ride the route on ROUVY virtually from home.

We begin our ride in northern Italy, north of Verona and at the northernmost tip of the most famous, largest and most beautiful lakes in Italy, Lake Garda. White sandy beaches, backed by low hills, are found south of the lake. In the northwest, mountains and sheer rugged cliffs frame the border of the lake, especially along the western shoreline. We will view some lake activities and landmarks along this famous tourist destination while riding on the northeastern shores. 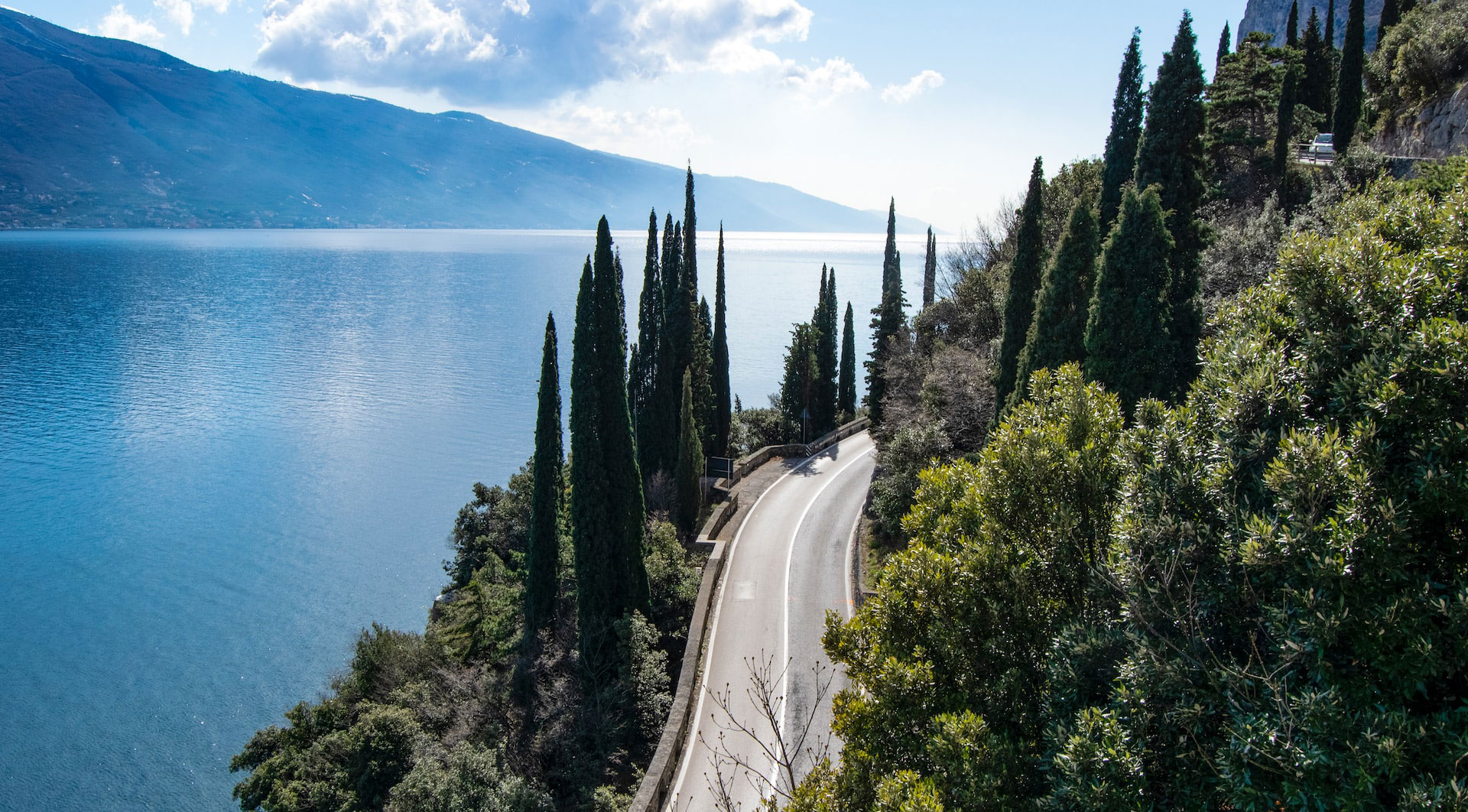 Due to its enormity, the lake spans three provinces: Brescia, Trento, and Verona. The views are spectacular along the edge of the waters: on the road, bike paths, promenades, cafés, islands and shorelines. If exploring higher up, one can view the entire lake along hiking paths along the rugged cliffs that tower along the lake. The Garda Mountains are an extensive mountain range of the Southern Limestone Alps and border near where we start the 27 km stretch making up part of the 140km total distance available for cycling around the lake. 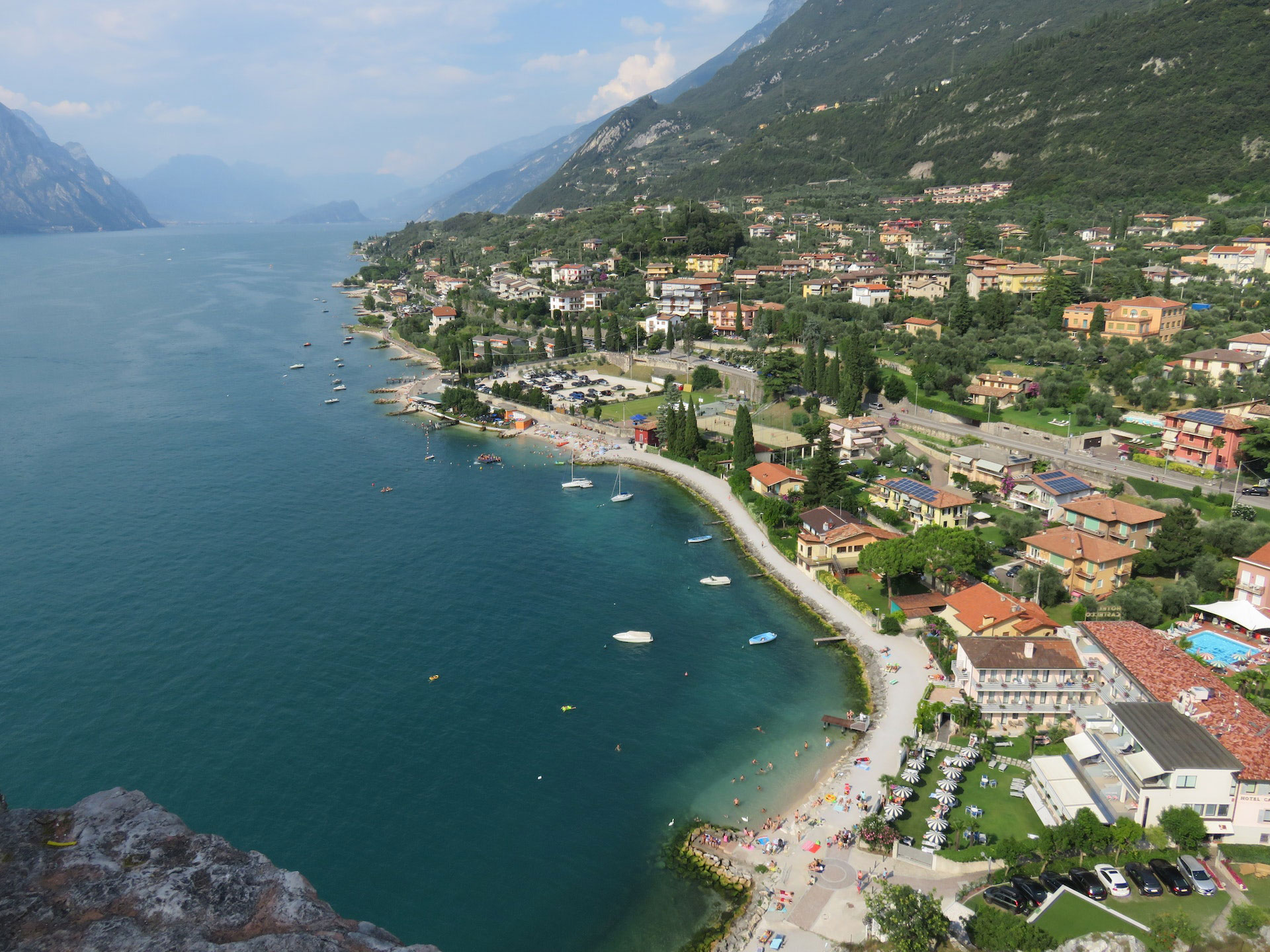 Lake Garda, which covers 370 square kilometres, offers the cyclist a fantastic riding experience due to the many activities and attractions along the route popular in the summer: sailing, running, mountain climbing, windsurfing, and hang gliding, all with the magnificent scenery of lake and mountain views to soak up. The main road we ride along provides panoramic views of the sparkling azure blue water under sunny skies. In the distance, lush green rolling hills are covered here and there with cypresses, while quaint, picturesque old villages and castles dot the lake's circumference. 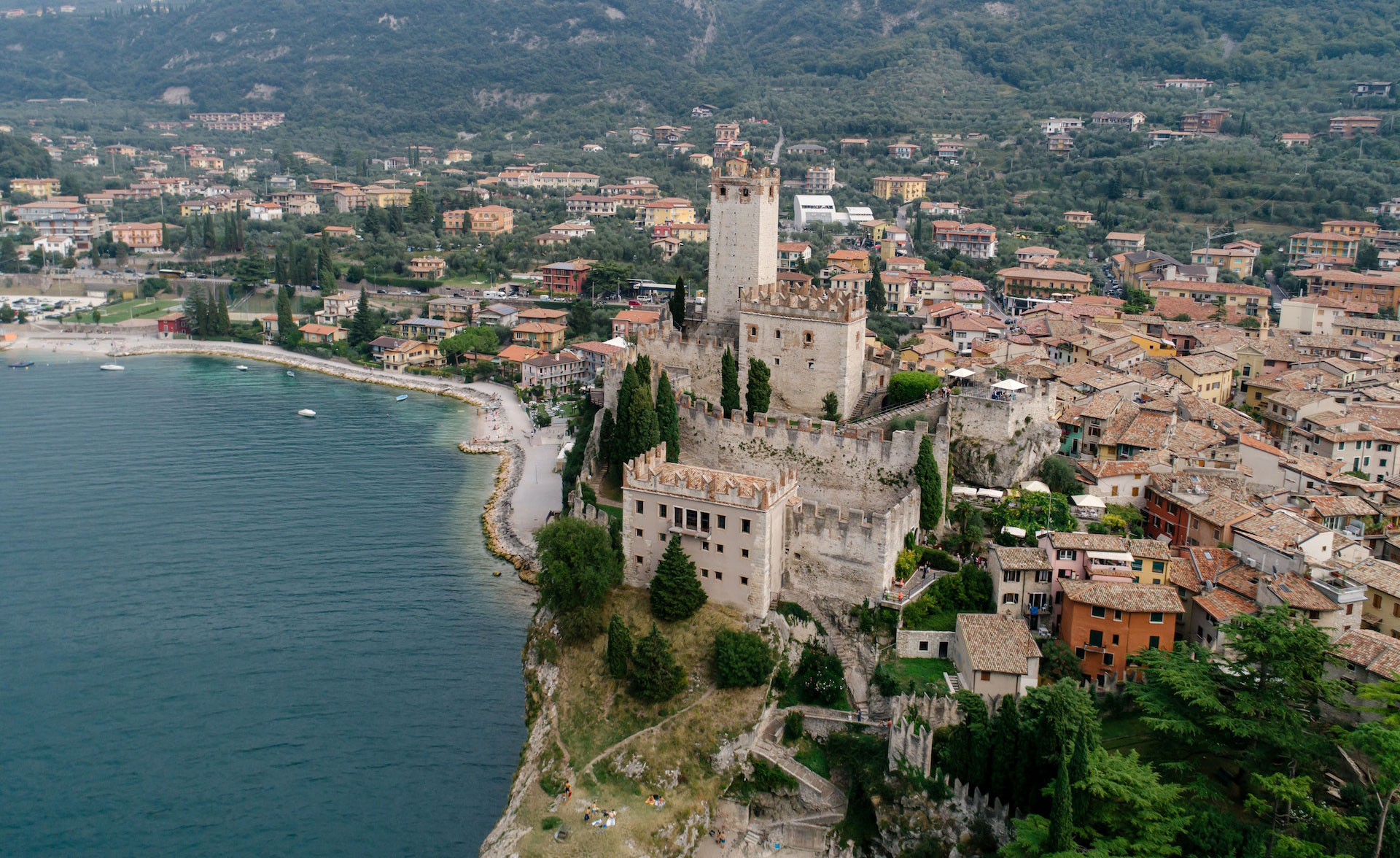 Above: plenty of historical places to be found along the lake

While on your bike, you’ll take in the ever-changing scenery that has influenced, motivated, and attracted famous painters and poets over the ages to express their creativity in this spectacular, natural, historical, and culturally rich area. The beaches provide an attractive frame of the lake with the panoramic massive mountain peaks of the Garda mountains, the highest being Monte Cadria at 2,254m, a backdrop in the distance. At the same time, the relaxing shores offer an opportunity to chill and cool down in crystal clear and turquoise water. In real life, you may want to consider that option! 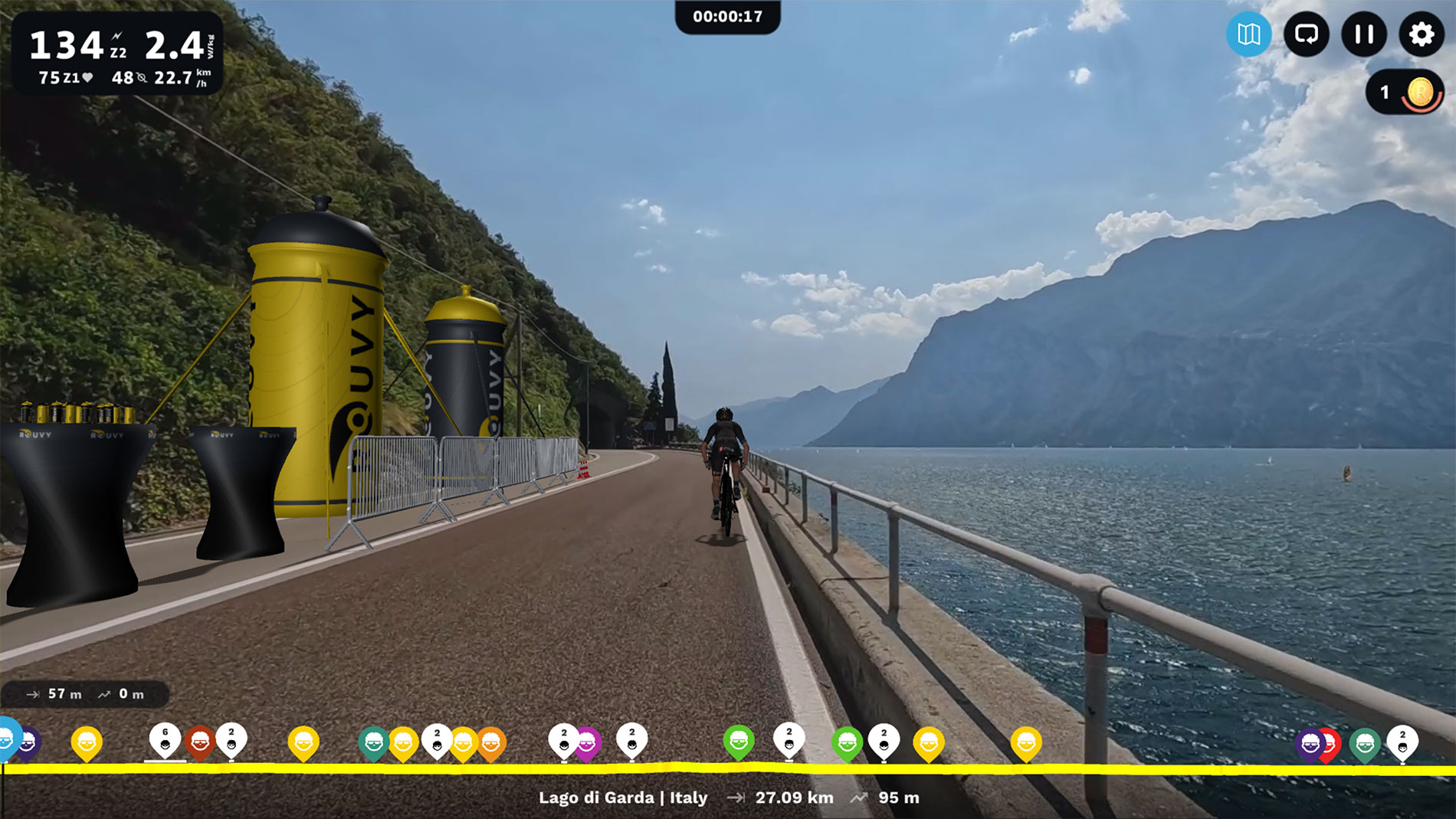 Lake Garda formed in the Quaternary or Pleistocene Ice Age, approximately 1.5 million years ago, created by a glacier cutting a path to form the lake once it melted into its unique shape. Dotted within the lake are five inhabited islands and several small uninhabited ones. The islands have luxury hotels, various water and adventure sports, and exciting tours inside ancient ruins and mysterious medieval castles. 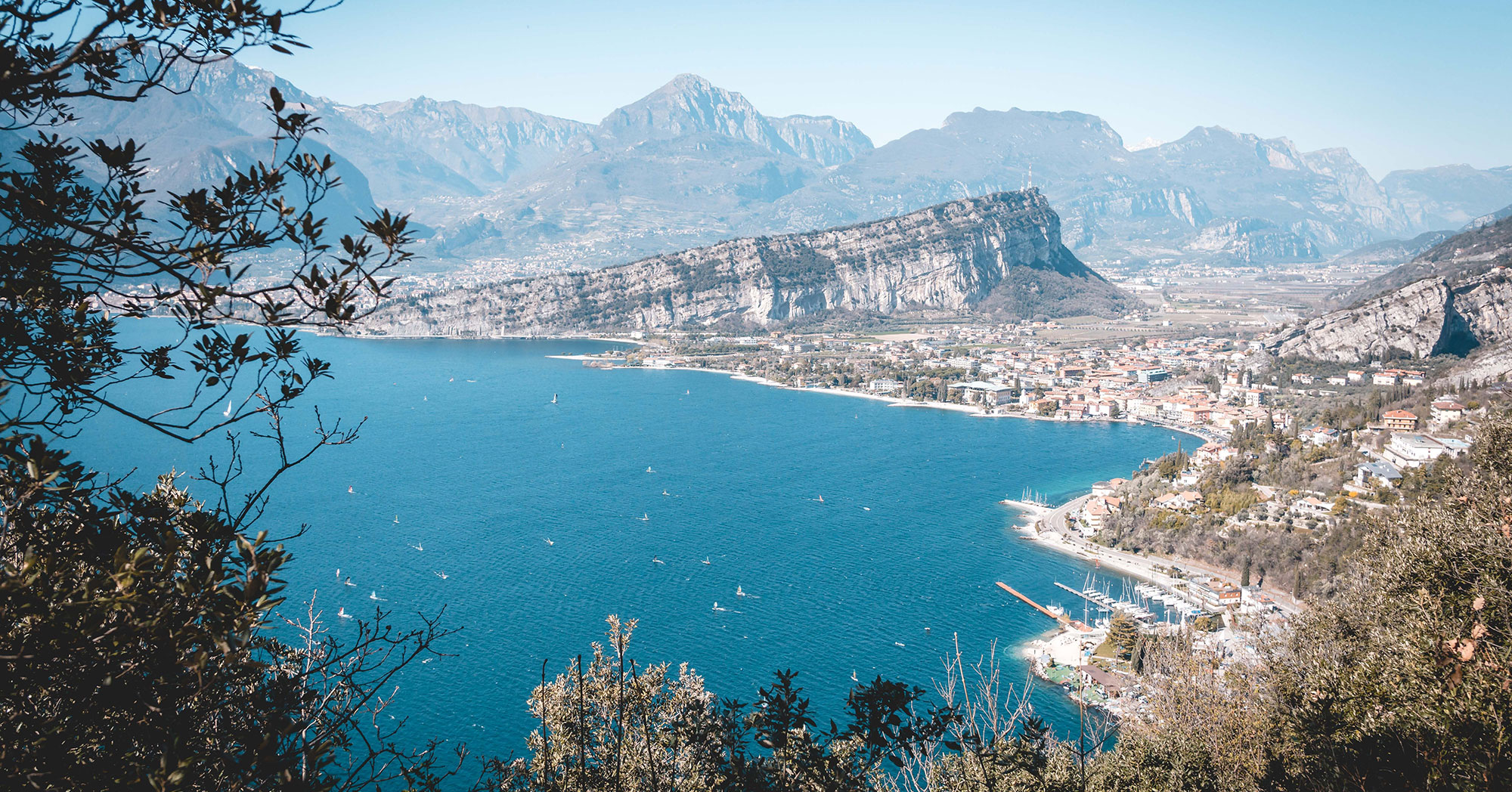 We go past one of the smallest islands, called Isola del Olivo, at the 14km mark on our route. This island is uninhabited, wild and popular for divers to venture into the depths of a small cave in the 350m deep lake. On Isola di Trimelone, at the 17 km mark on the ride, is the third-largest island, also uninhabited with the remains of an old First World War fortress. The largest island, Isola del Garda, combines nature and history. It was once the ideal and peaceful site of a medieval monastery, founded by Saint Francis of Assisi in 1220 and visited by the poet Dante Alighieri. Ages later, a 19th-century Venetian Gothic-style building replaced the monastery.

Historical battles along the shores

Due to its position, shape, fertile lands and magnificent beauty, the shores of Lake Garda were witness to bloody battles of conquest going back to AD 269, with conflicts between the Roman and Germanic tribes at that time on the shores of what was then called Lake Benacus. According to archeology, the first settlement on the lake took place between 2000 BC and 4000 BC by the Romans, who had a significant influence in the region then. Until the end of World War I in 1918, the northern part of the lake belonged to Austria due to the battle of Rivoli in the late 18th century between Austrians and the Napoleon army. This battle led to the French Occupation of Northern Italy, followed by the 19th-century battles when Napoleon fought with the Sardinians against Austria. 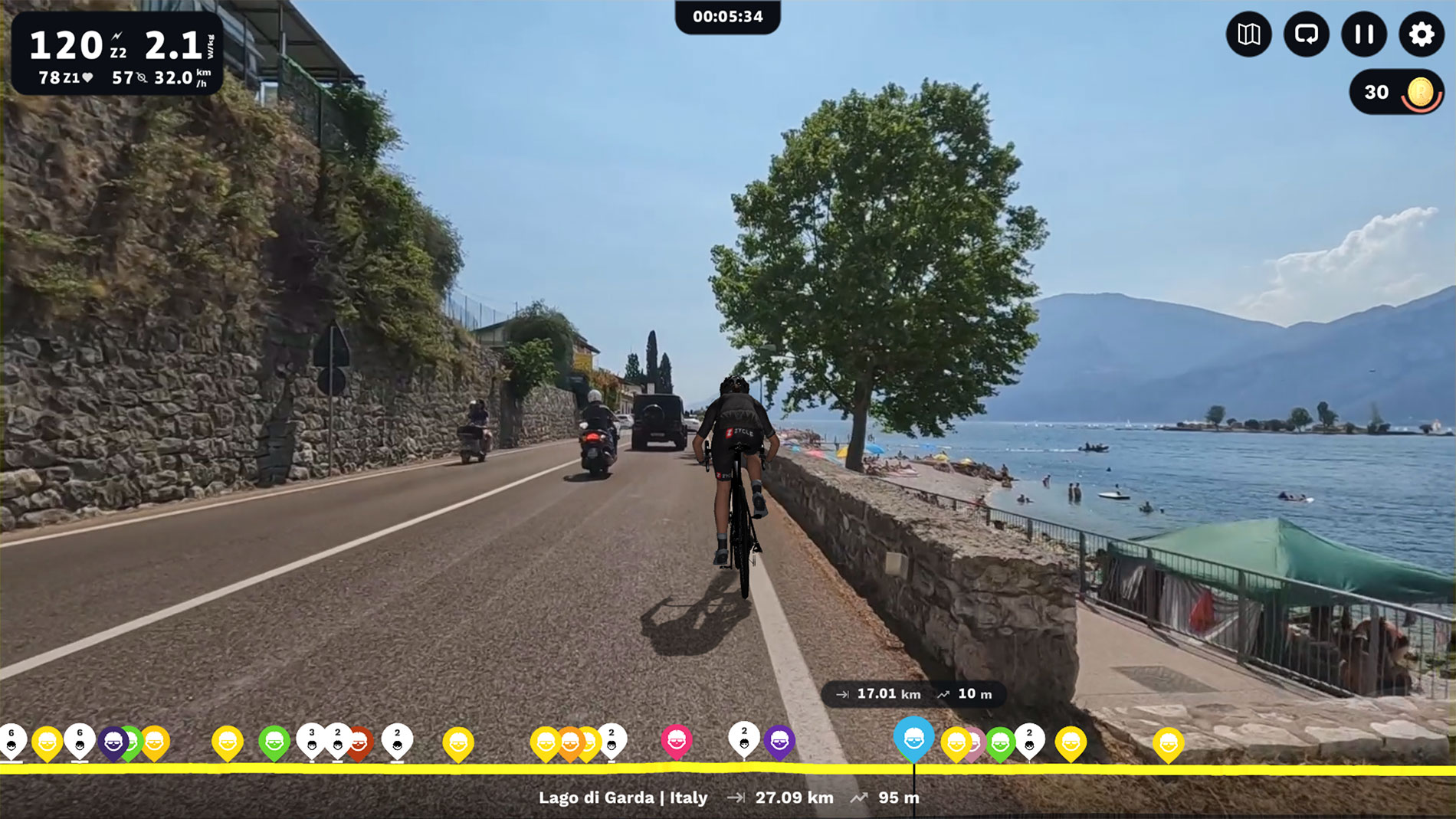 Above: One of the islands just off the shore

Enjoy a ride along Lake Garda in Italy on ROUVY.

Other places to explore on routes with lakes

If you want to ride another flat route around a lake, try the Caldonazzo cycleway, where you can explore and enjoy sunny shores in the Valsugana valley in Trentino and Northern Italy.

There is also the beautiful Trento Cycleway if you’d like a quick route for a lunchtime spin. Need a longer ride? Try Varano lake. It has magnificent views!