Alpe d'Huez is undeniably the world's most famous climb. With over 30 appearances in the Tour since 1952 and a regular stage mountain top finish since 1976, it is one that you have to do and get a taste of the suffering, pain and glory! While it is not the most challenging climb in the Tour, Alpe d'Huez is usually the grand finale to a long and gruelling Alpine stage, often including Col du Madeleine, La Croix de Fer and Glandon. Also, the experience of the journey of carving one's way up the mountain and not just the final destination to the top makes it unique: The countdown of the 21 hairpins, which, during the Tour, is lined with over a million spectators, makes this event magical, and the atmosphere pulsating.

During the summer months, between 500 and 1000 cyclists make their way up Alpe d'Huez every day, starting from Bourg d'Oisans. Each year, the La Marmotte and Haute Route events draw thousands of avid recreational cyclists on their special pilgrimage to conquer their goals in this iconic location. La Marmotte Granfondo is a one-day cycling event held in the summer after the Tour de France. The organisation limits the number of entrants to 7,500, and most participants come from abroad to fulfil their bucket lists. The Marmotte routes include the Glandon, the Telegraph, the Galibier, the Lautaret, and finally, the final ascent of Alpe d'Huez, with a total of 177 km and 5,000m covered in a day. Participants' goals may be for a specific time or to finish. Meanwhile, the Haute Route is a more extended event over seven days, a distance of 755 km and 20,100m ascent, with the Alpe d'Huez as one of the epic climbs. 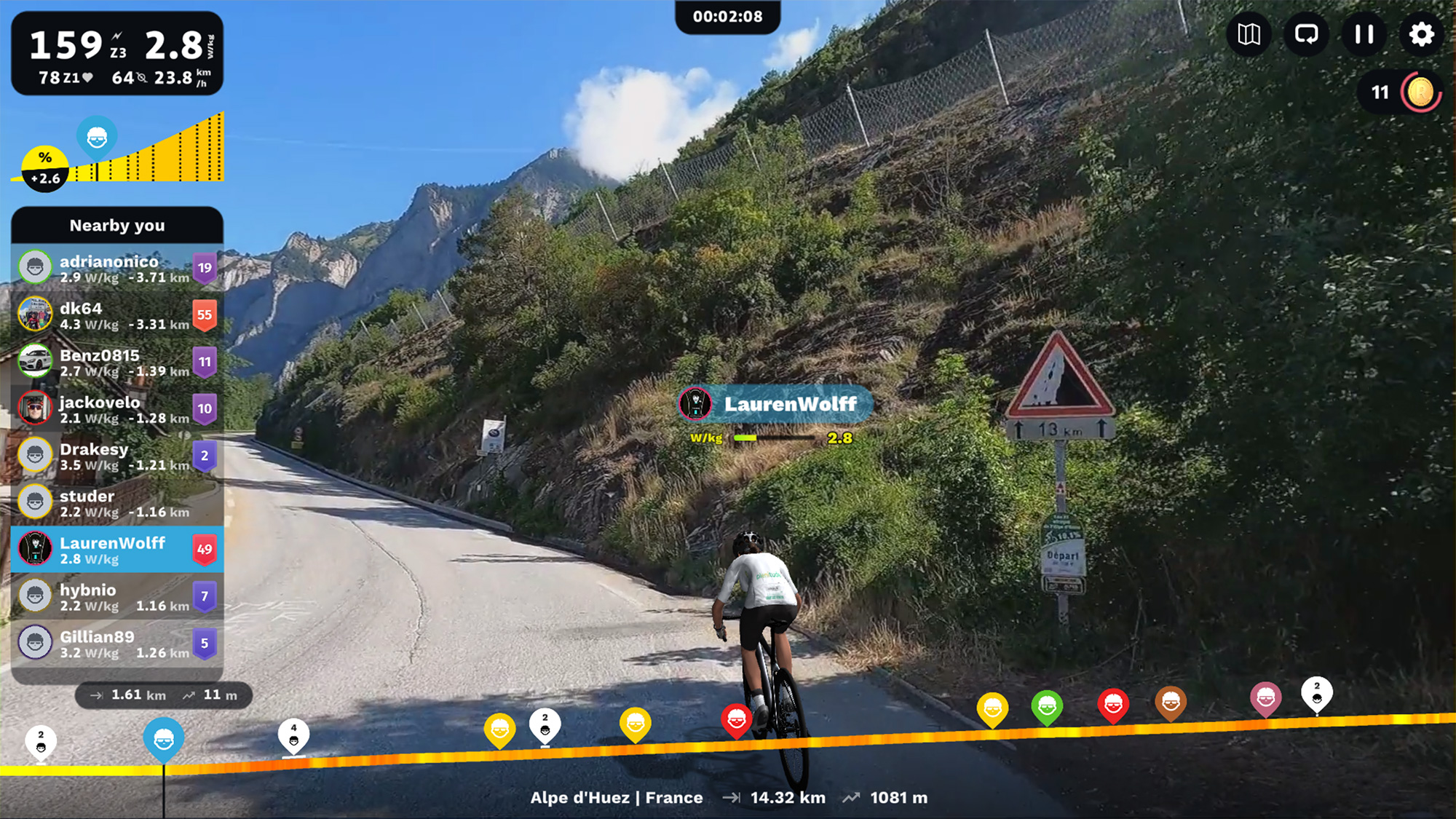 In the winter, Alpe d'Huez is a well-known and historic ski resort, attracting downhill or Alpine skiers rather than cyclists. In all types of weather, you can experience this legendary climb on ROUVY. Feel the actual gradients and see the same views virtually on ROUVY without leaving your home, and while doing so will make you realise the unbelievable strength it takes to be a Tour de France legend.

Had it not been for a group of business owners looking to market their ski resort hotel, Alpe d'Huez may not be so well known today. They petitioned the Tour race organisers and persuaded them to host the first-ever mountain top stage finish inaugurating the climb's legendary status in the Tour. They were successful, and the climb made its first appearance in 1952, won by Fausto Coppi, who attacked 6km from the top and marked the start of the Golden Age of cycling. Pantani was one of the few riders who could take the 'maillot Jaune' on the Alp and keep it all the way to Paris. 1952 was also the first year TV camera crews on motorbikes came to the Tour. 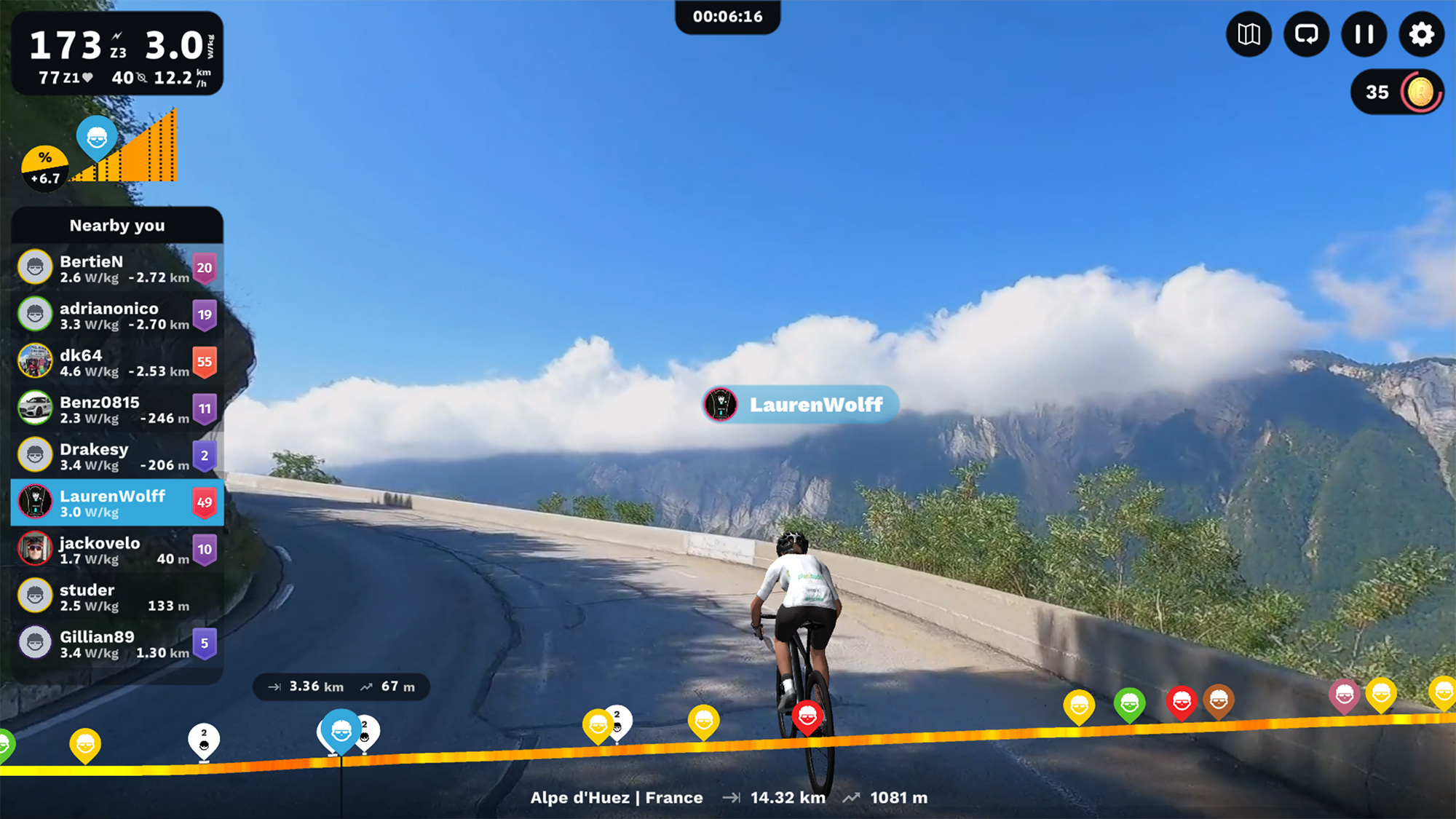 Going back in history, in 1999, Giusseppe Guerini won despite being knocked off his bike by a spectator after breaking away on his own, and he managed to get up and win the stage. Then, in the 2004 individual Time Trial, it became dangerous when fans got too close and also pushed riders along. 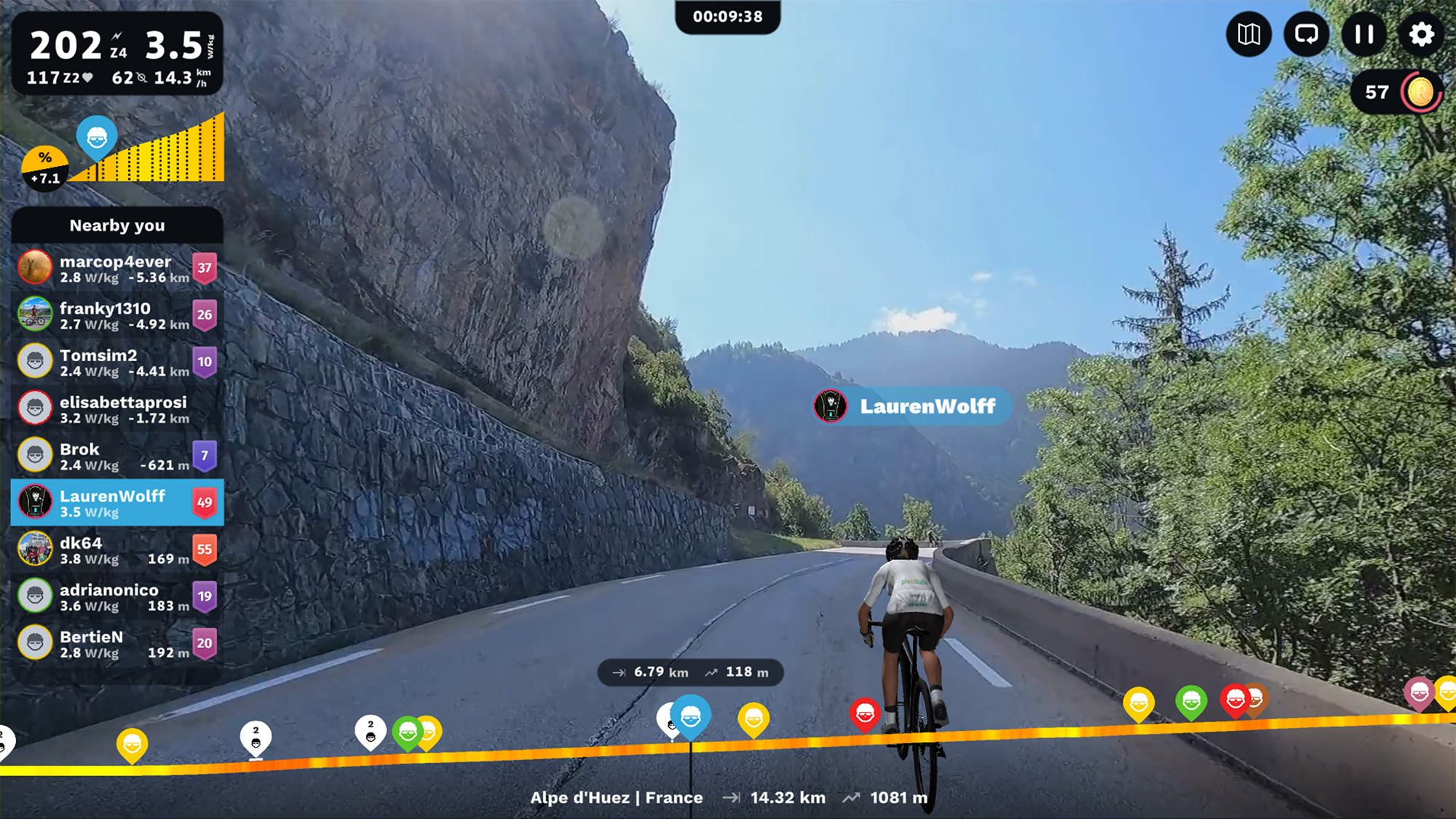 The first eight out of the 14 first-ever stage winners were Dutch, so the name 'Dutch Mountain' was coined, and so Dutch Corner became a celebration of orange-themed outfits, orange smoke flares and beer and established itself on Hairpin number seven. Here, fans from the Netherlands camp out and position themselves days before the Tour arrives, creating a chaotic and party atmosphere. But no matter where you find yourself on the way up, being a spectator at the side of the road on Alpe d'Huez should be on every cyclist's bucket list. Nowadays, the crowds are more under control with stricter security measures and road barriers to protect the riders. 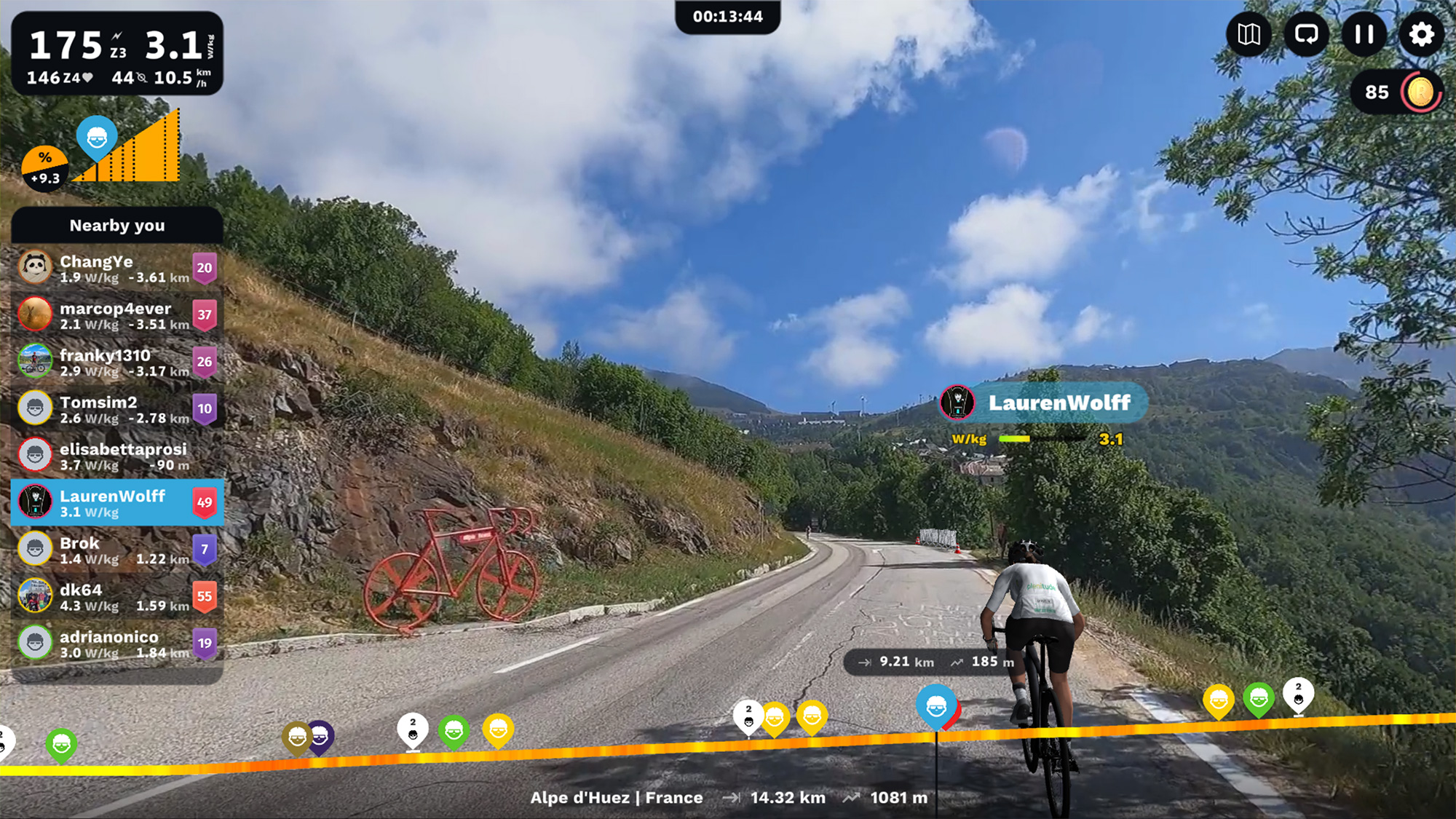 If you want to test yourself in real life and do a race up Alpe d'Huez, then every Wednesday morning, a mass start timed event begins in the centre of Bourg d'Oisans. The chip starts timing when you pass the sensor at the bottom of the climb at Chrono 0 sign. 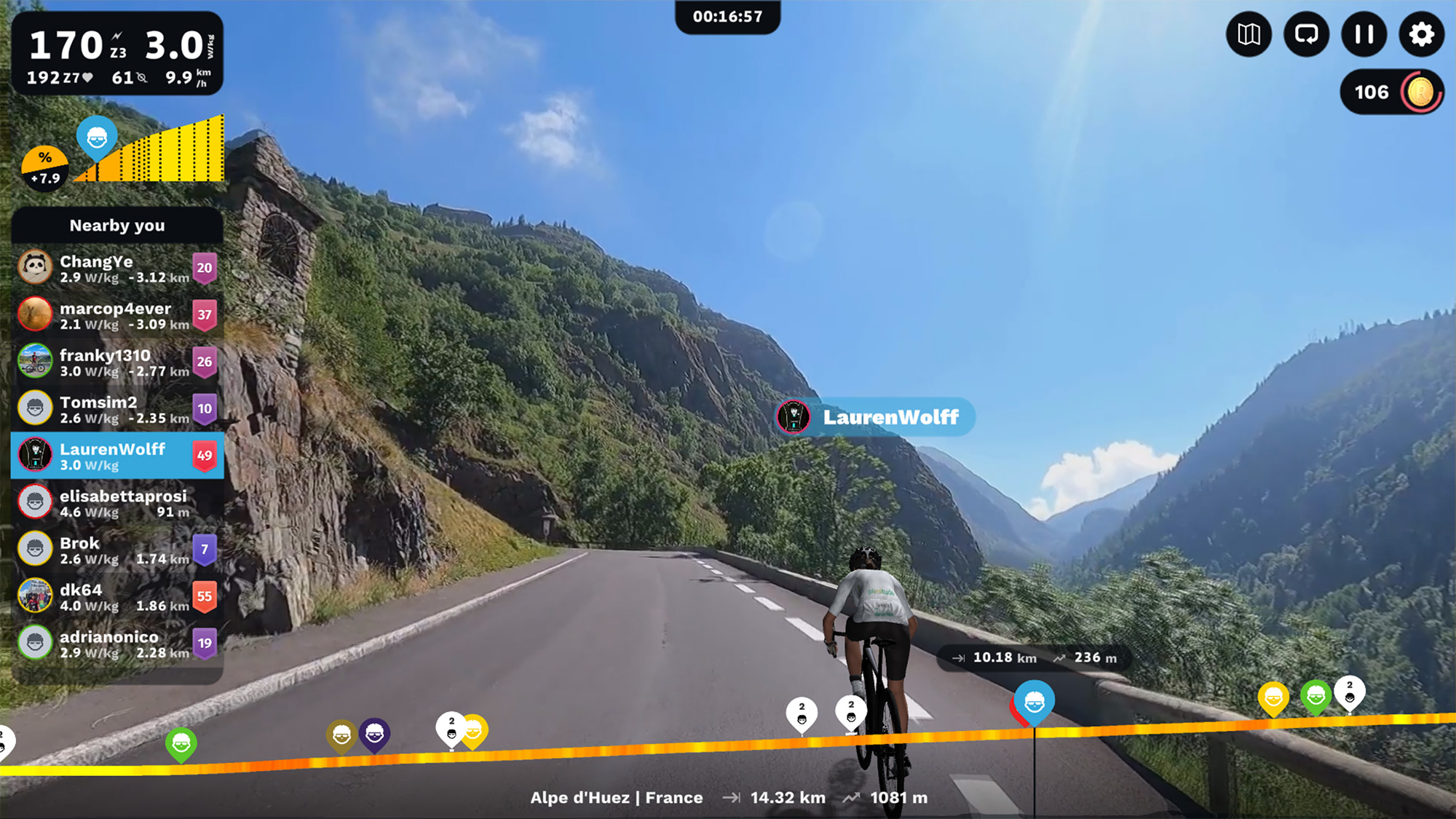 How to tackle the Alpe d'Huez

Before approaching the Alpe d’Huez on Rouvy you’ll need to prepare! Eat something with high glycaemic carbohydrates with sugars 1-2 hours before you get on the bike. Begin with a good warmup of at least 15 minutes. The warmup of gentle spinning and a low heart rate will increase the blood flow to your muscles. A warmup raises your body temperature and helps improve the range of motion in your joints. Once warm, your muscles feel less stiff and pedalling becomes more fluid.

Pacing is KEY: Hairpin by hairpin, up the climb we go!

Winding your way up to the summit, you'll ascend 1,860 m and ride 13,8km with an average gradient of 8% and a maximum of 13%. Ride at the highest pace you can sustain for 14km of climbing and keep a relaxed pace. Unlike on the virtual ROUVY climb, there are no distance markers or percentages of what the gradients are on the actual climb, only the metres ascent done. On the actual route, each bend is numbered and named after past legendary stage winners, which can inspire the imagination about the battles, stories and conquests that have taken place on this iconic climb since the Tour began.

Look for the first milestone that says 'Chrono Depart KOM 0' a couple of km before the first ramp. Important tip: Don't start too quickly. Try to be conservative for the first six bends, as they are the hardest, averaging 11%. Try to keep the heart rate as low as possible by maintaining a constant and comfortable cadence to keep breathing stable. So relax, and keep a positive attitude focused on embracing the climb. And don't forget to drink - every 10 minutes will help maintain fluid levels and keep you hydrated. 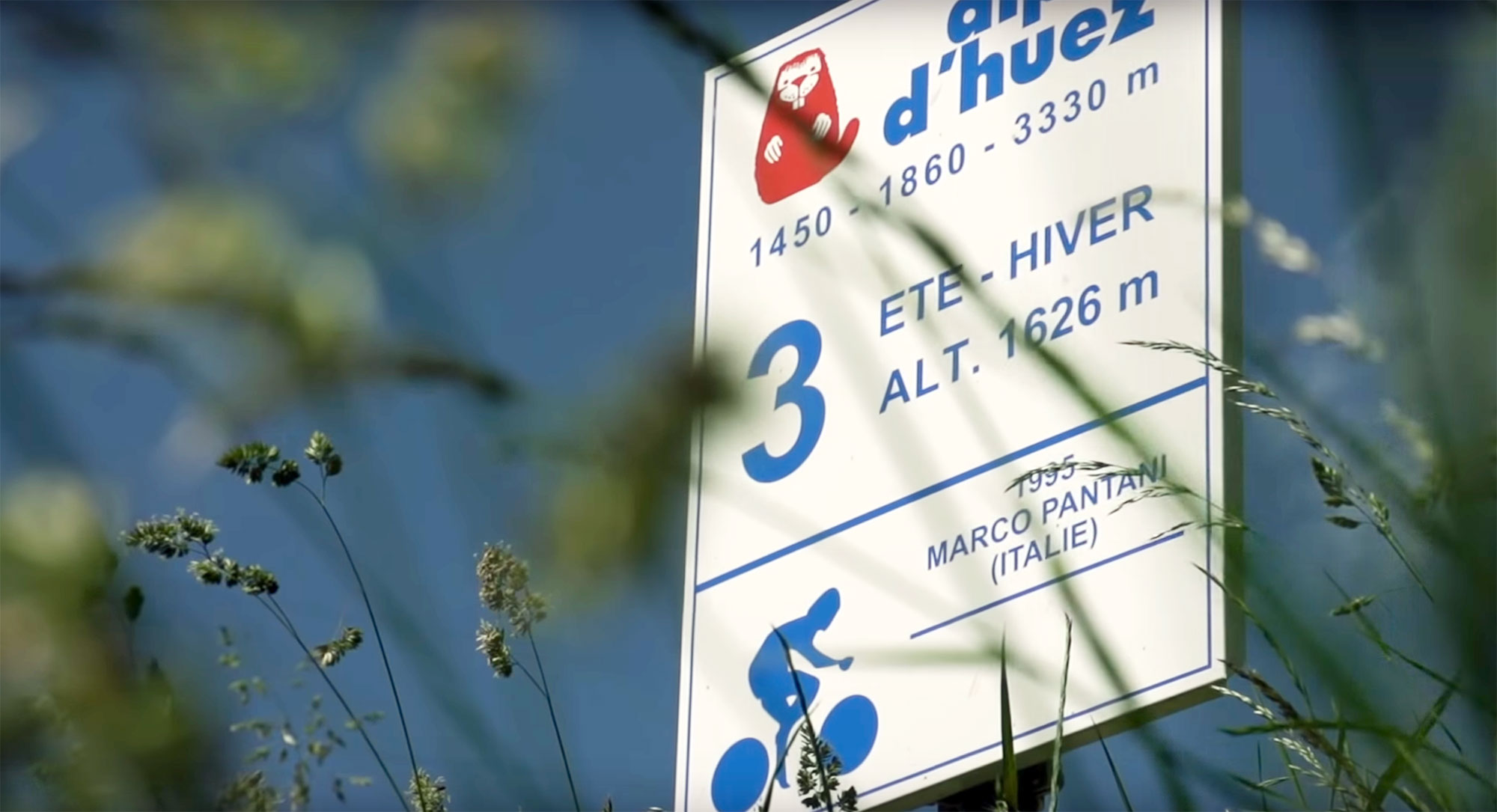 Landmarks along the way

From the village of La Garde to Huez, where you'll find the middle ten hairpins 15-6, you'll feel and enjoy a 200m respite with a slightly flatter section. Make the most of it and take in some water and, if necessary, a gel and an opportunity to recover your legs. You'll then pass a few landmarks: the monument dedicated to Joaquim Agostinho. On the 14th curve of the Alpe d'Huez, a large bronze bust mounted on a three-foot granite pedestal commemorates his stage victory in 1979. Onwards for a few more corners, you reach the landmark church of Saint-Ferréol. 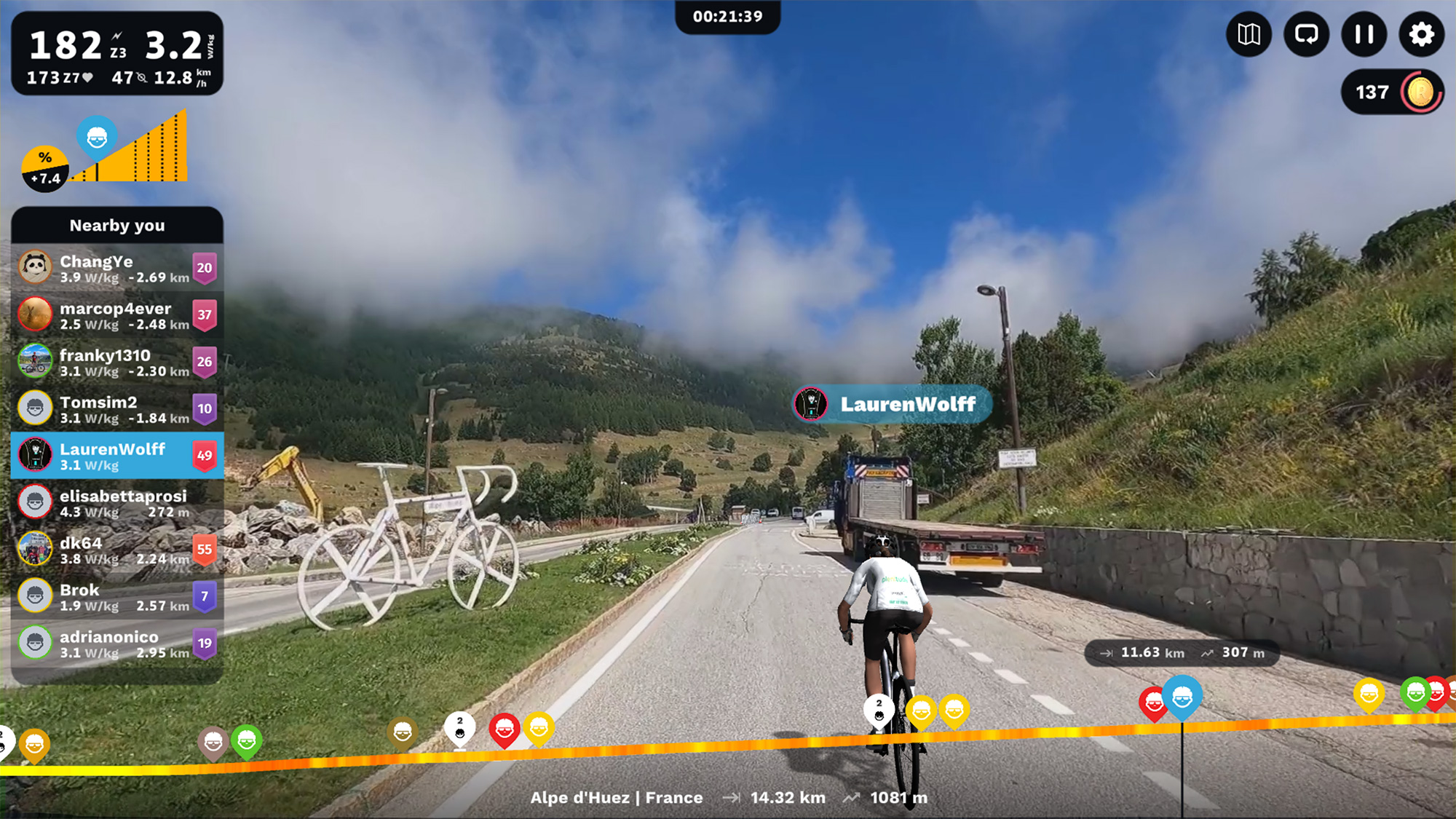 We ride on through Huez village from bend 5-0, which will hurt somewhat as these are as tough as the first few. Only on the last three turns is where you'll feel the gradients ease to 5-6%. Enjoy the glory at the top, finally! There is a tourist 'top' finish with a banner bridge across the road (this was where I took my first photo after riding down and then up as I started at the top ) and the Chrono and Tour finish, which is a kilometre further. Be proud that you virtually finished this legendary and mythical climb of Alpe d’Huez on ROUVY and experienced something similar to the actual version outside. 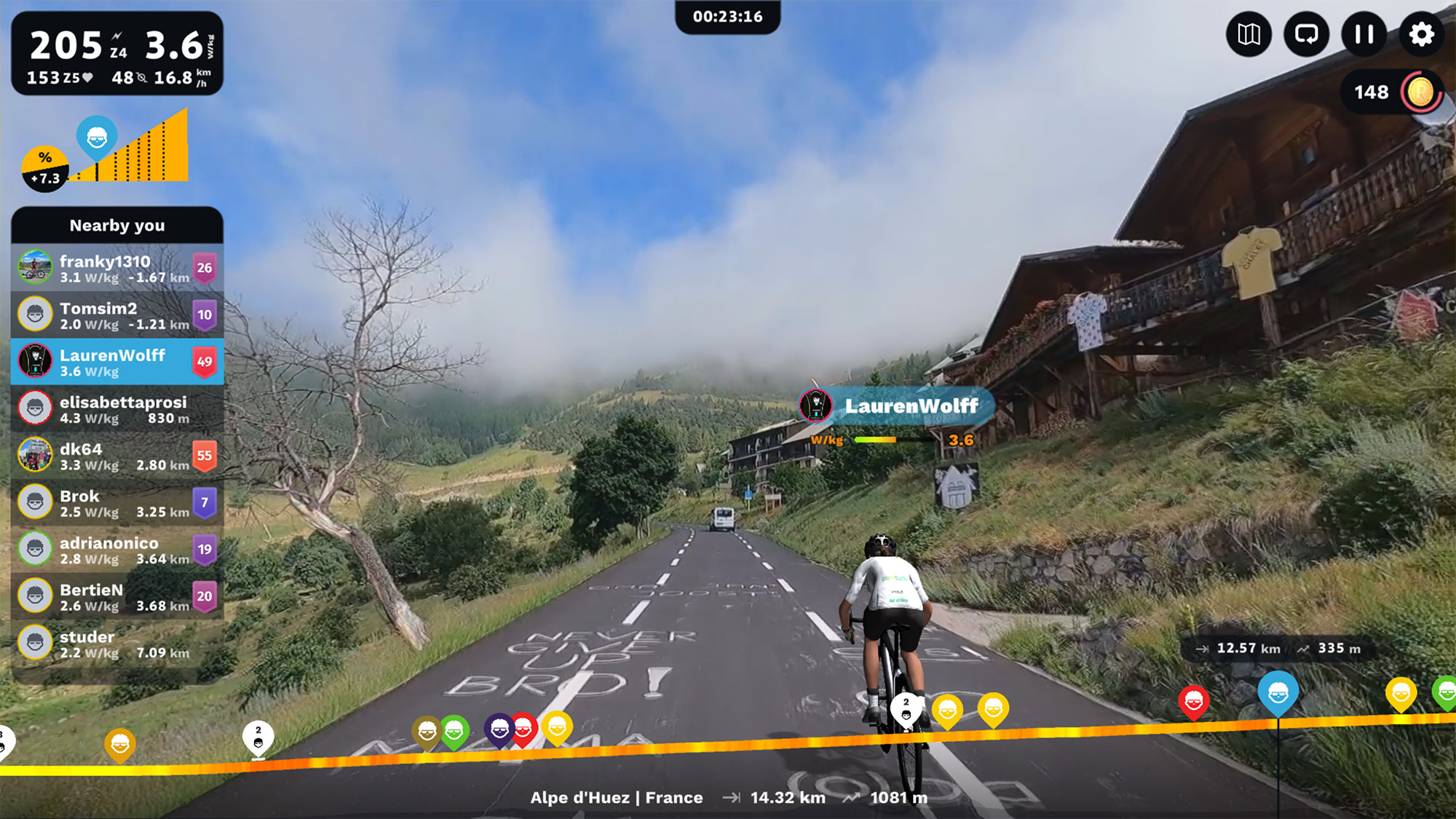 Tip: On a good direct drive trainer, your experience will be optimal because the gradients will feel real, but remember to make sure that you have climbing gears on the bike to pedal a high cadence of between 80-95 rpm! 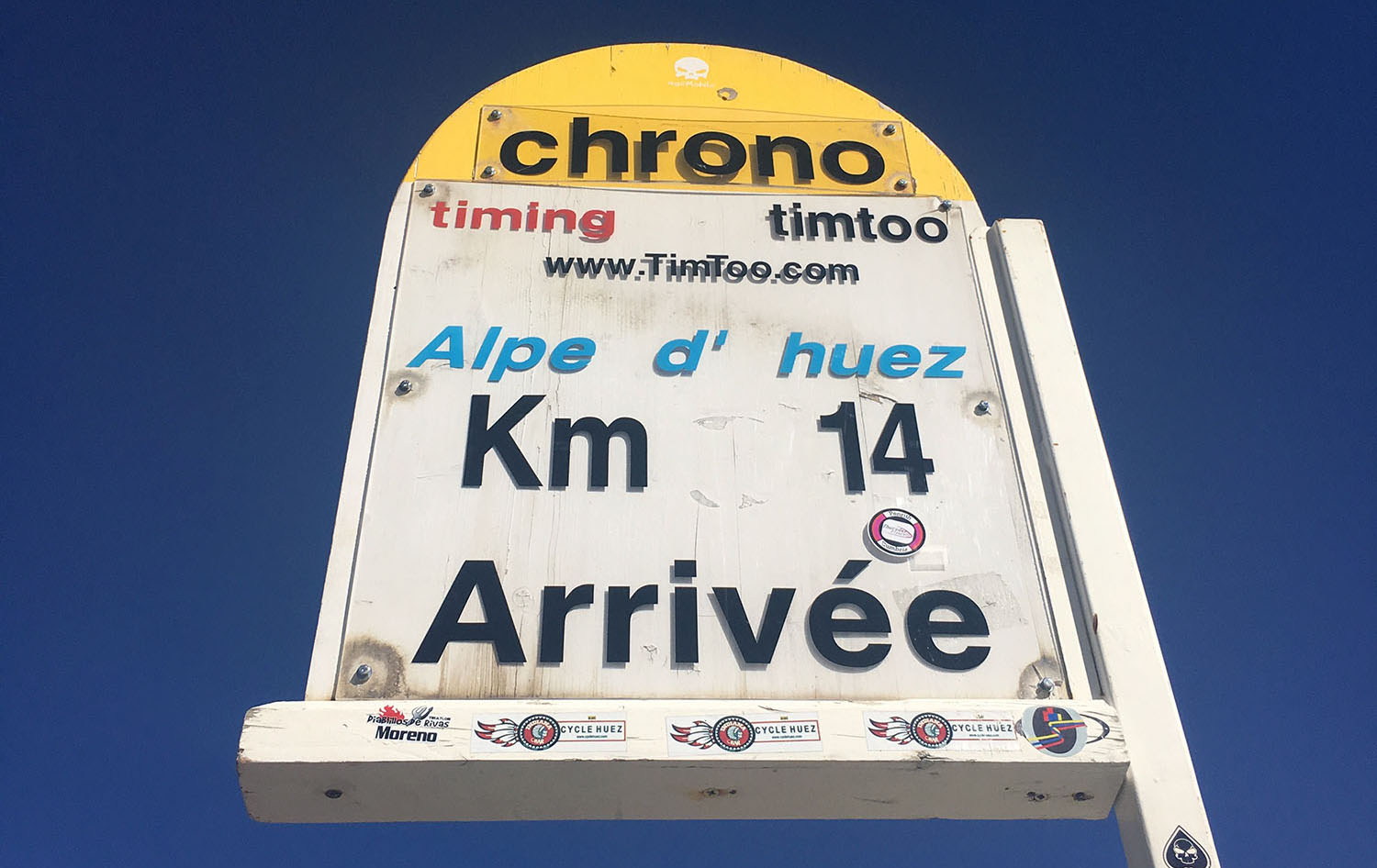 Here is the list of the fastest times on Alp d'Huez. Marco Pantani holds the record for the quickest ascent at 37 minutes, 35 seconds over 14.45km.

Estimated time to complete on Rouvy:

Ride the iconic and legendary Alp d'Huez iconic climb on Rouvy and enjoy the experience of climbing more legendary and iconic climbs from the Tour and join the Conquer Climbs in France Challenge.

Not only are the Tour winners legends, but anyone who climbs to the top can be proud of the achievement. The climb is legendary for all!