ROUVY's mission has always been to create an indoor riding experience that is as close as possible to the real thing, from the comfort and convenience of your own home.

We like to regularly provide upgrades to the app. Usually these are small improvements designed to fix bugs and tweak the experience for the better. But this month we released an upgrade that's different and, we think, quite special. Welcome to OmniMode.

“OmniMode is an important milestone for us. We have always aimed to bring a major innovation to the market and global athletic community every 4-5 years and this is another turning point in the history of our product. From now on, virtual cycling will never be the same again"

In simple terms, OmniMode is the latest upgrade to the ROUVY app that uses improved technology during the digital creation of the rides to improve the indoor cycling experience by giving it more realism and more options.

By using actual video footage filmed on-location and mixing real routes with digital avatars, ROUVY has always been acclaimed for being one of, if not the, most realistic indoor cycling app on the market. But until now, when riding on ROUVY, there had only really been one view available - straight ahead.
Not any more.

When we're cycling in real life we instinctively like to look around; to see local scenery and landmarks we're passing, to see other riders in the peleton, or to look over our shoulder at what's behind. This was the aim of OmniMode and its introduction of a 360° range of views is a gamechanger in the way we see the world around us while riding indoors.

What are the New Features?

Let's look at the individual new features and what it means for the rider: 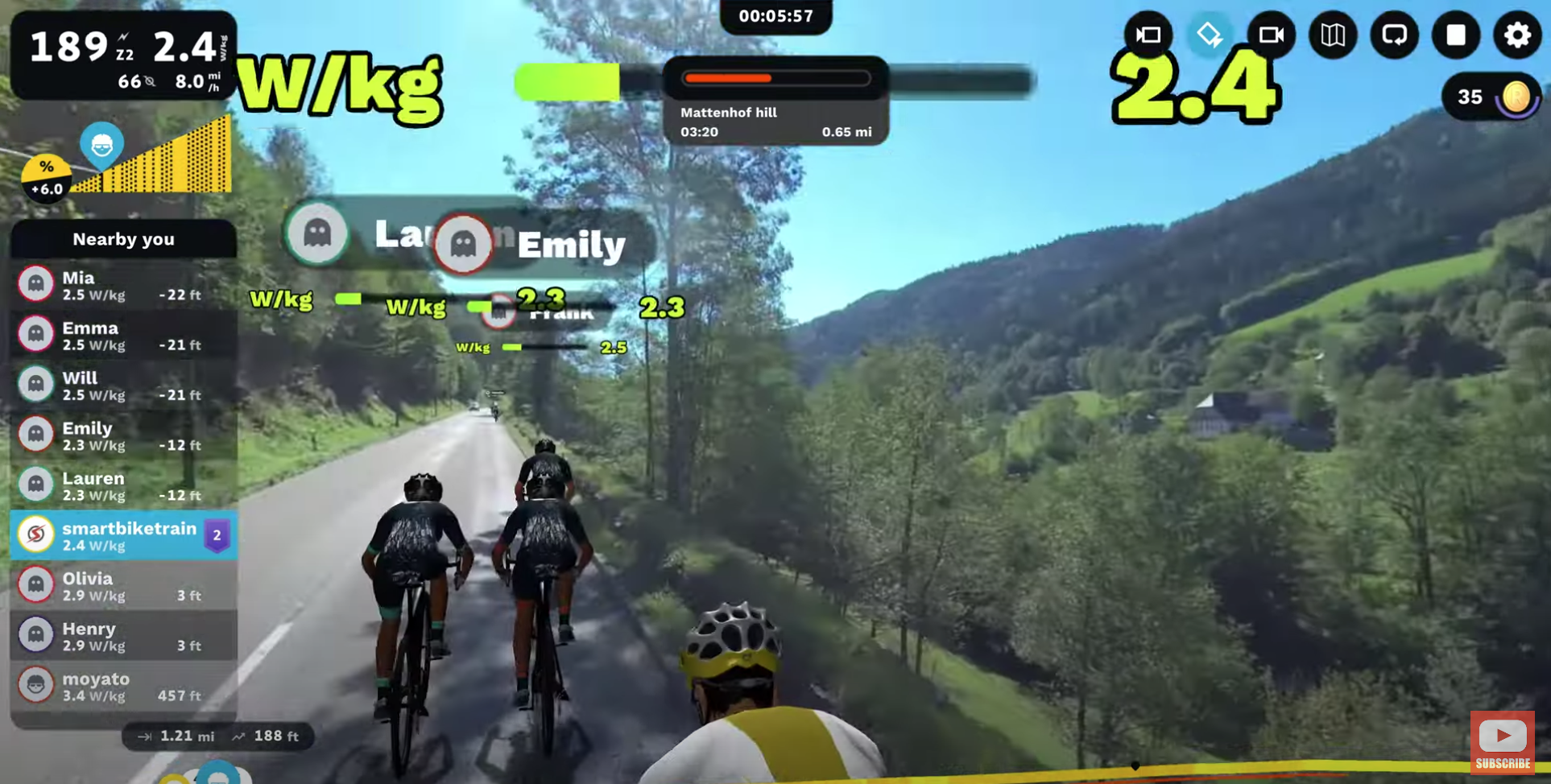 360 View. When the 360° View mode feature is on, the camera view will track the rider and then rapidly spin 180° to show the reverse view. This creates a dynamic riding experience that feels more like a live televised event and allows the rider to see more of the landscape around them.

This can be set to automatic where it changes every 50m or switched manually. 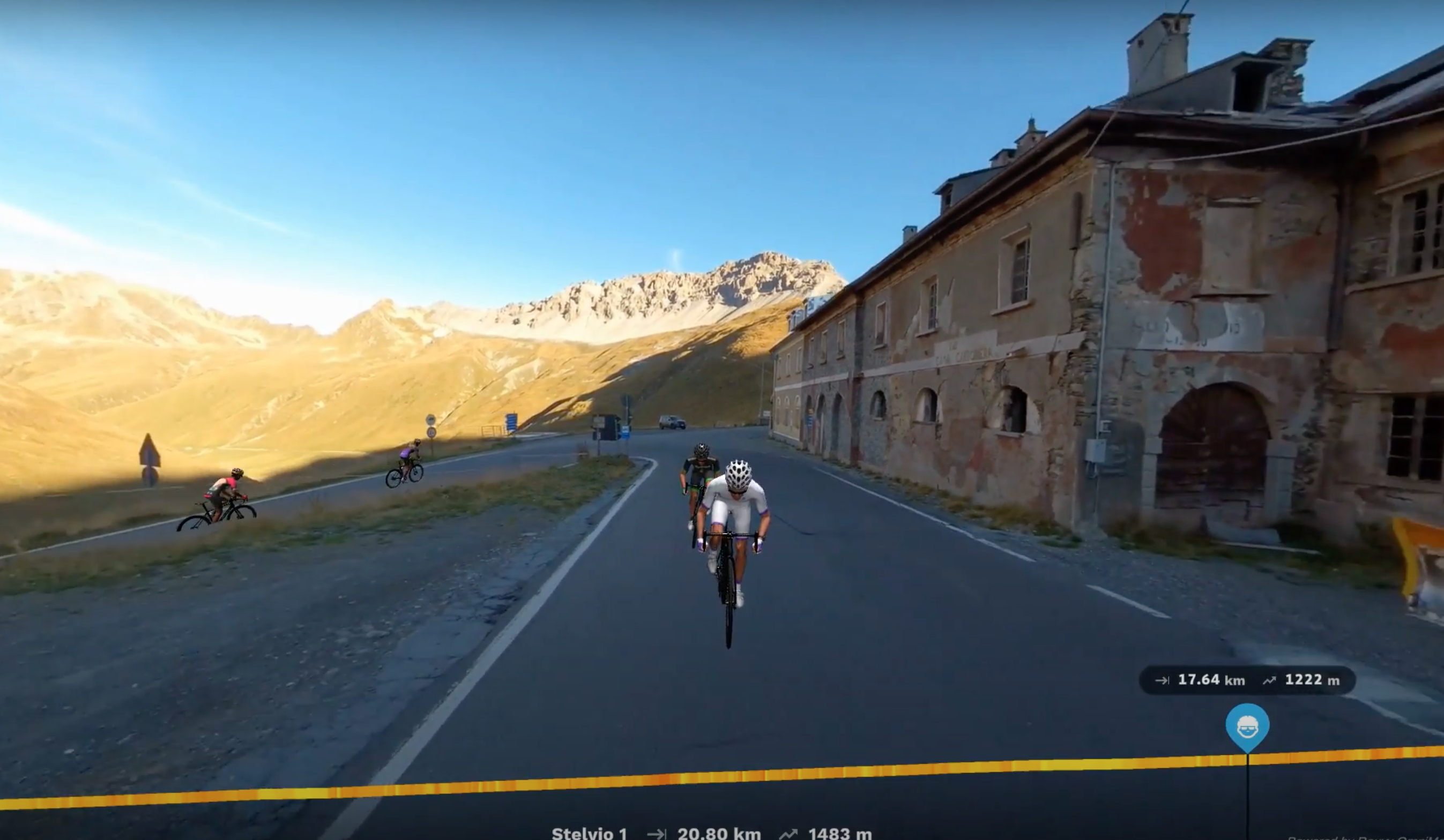 Rear camera view - As you cycle mile after mile staring forward, have you ever wondered who or what is behind you? Wonder no more! Now you can switch the camera view 180 degrees to see what's in your rear view. Imagine having a camera in the back of your helmet so you can now see a local landmark you might have missed, the rest of the peloton or who may be about to launch an attack. 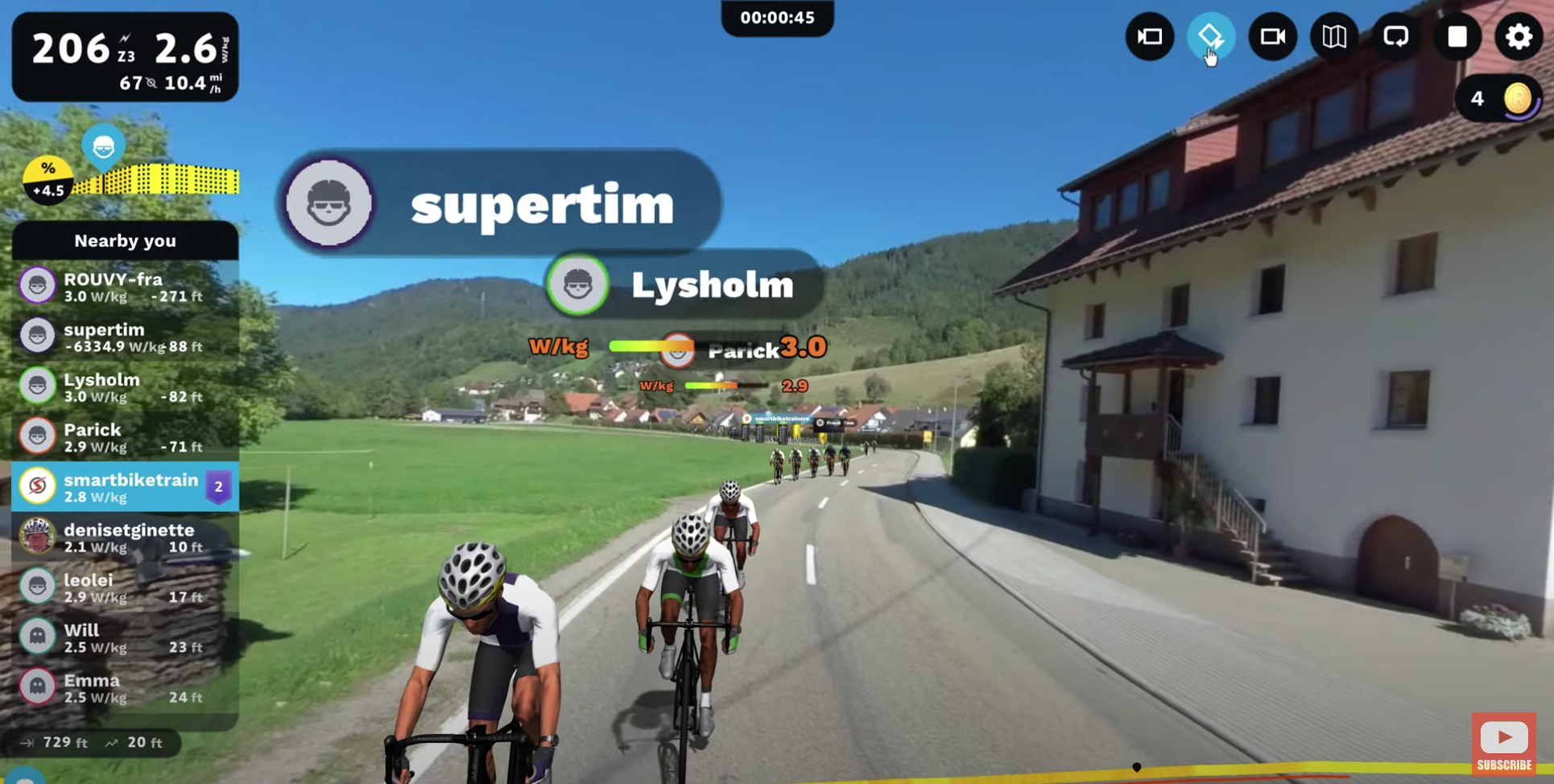 Altitude Profile (left top corner above) works in much better detail and smoothness - it's more user-friendly and accurate. The riding experience features even more realistic gradients, and this is especially noticeable on high-end trainers. 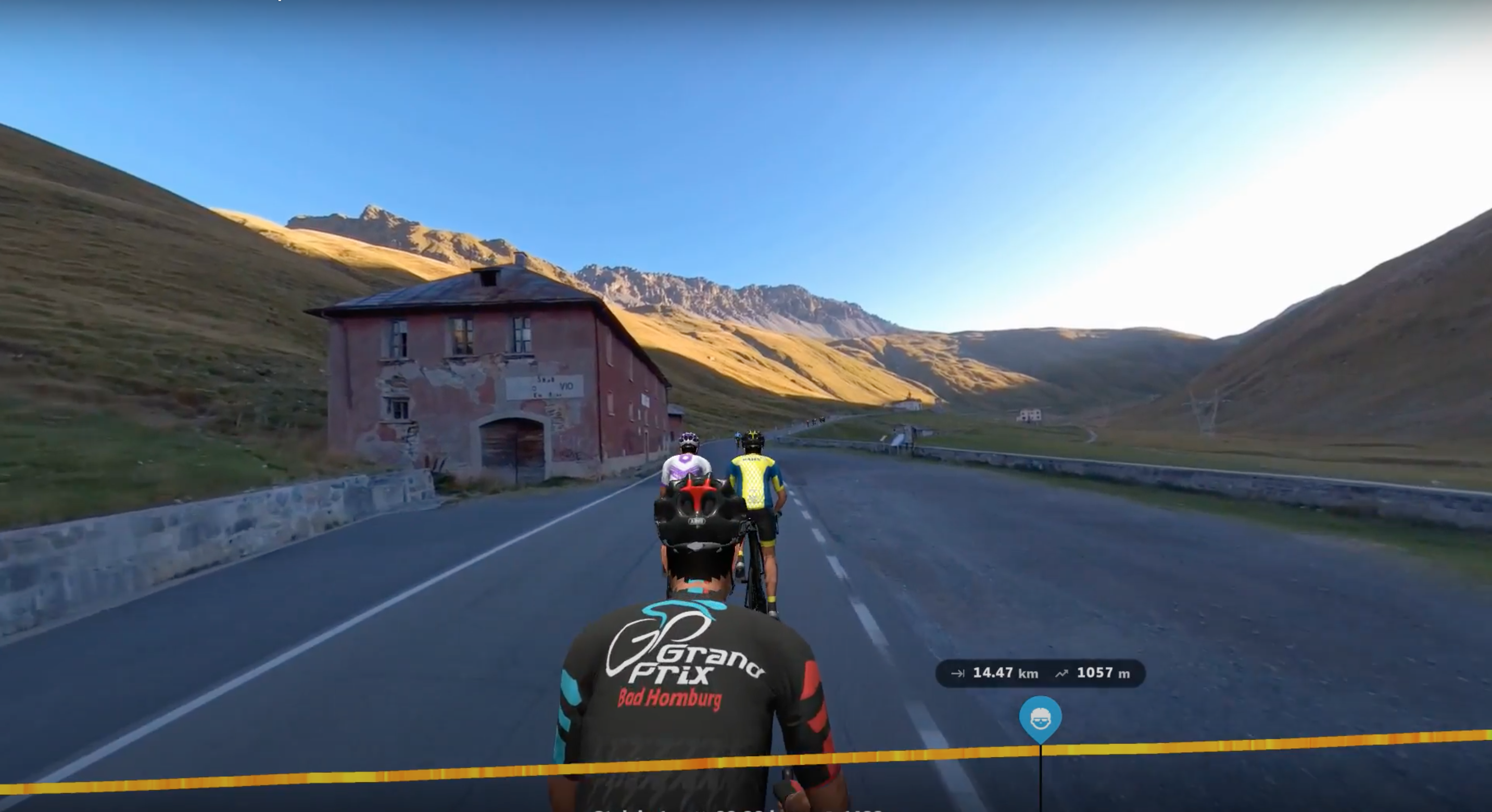 Visibility is far more detailed and smooth with improved definition and resolution. Objects and their details are visible at much further distances. You can also now see other riders/avatars and overlaid 3D objects at further distances. This will be felt much more noticeably for multi-rider experiences in group rides and races with enhanced levels of interactivity. 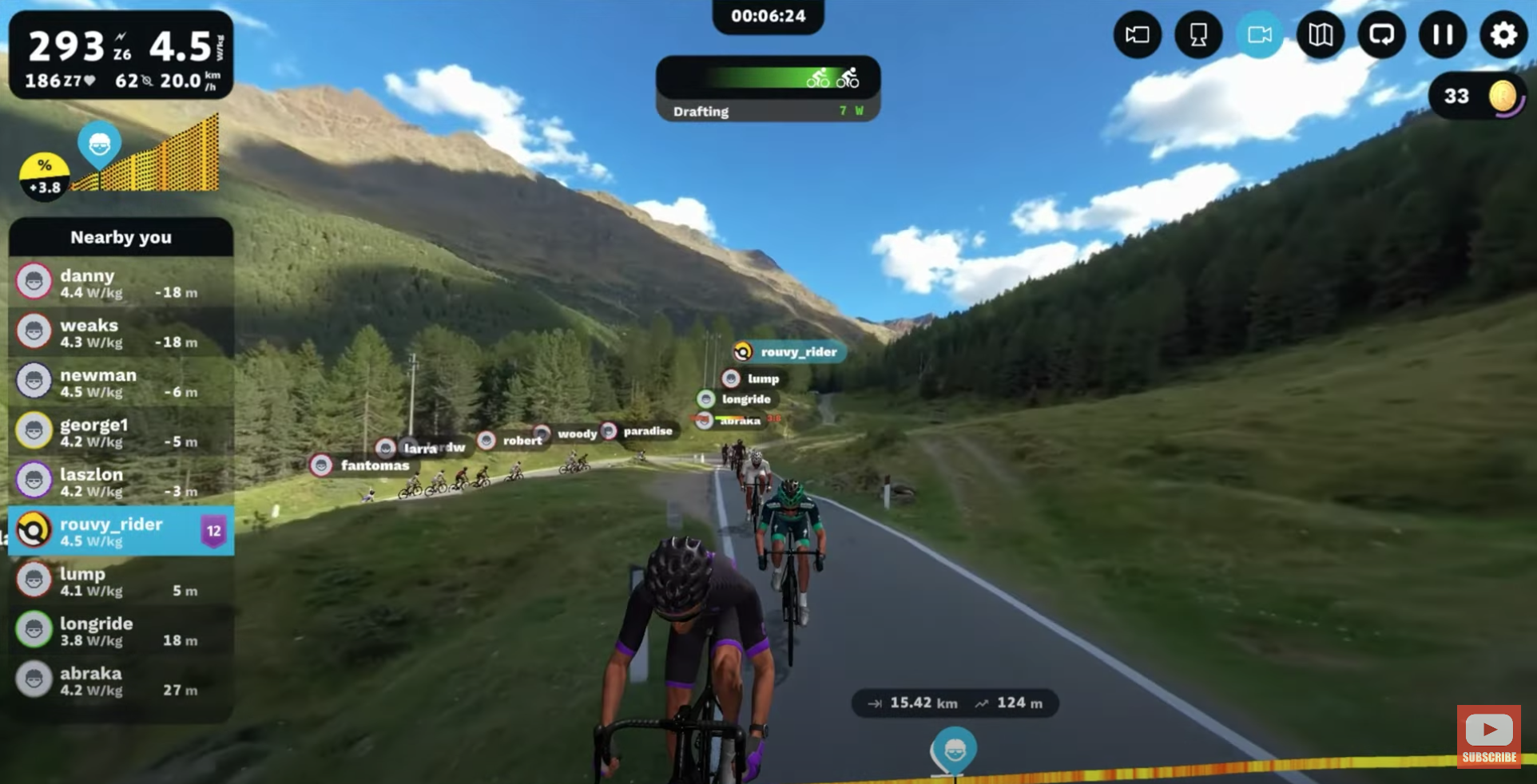 The camera angle in OmniMode is now higher and the view is wider and more panoramic. In complex technical terminology, you can now see more.

We've also got rid of a lot of annoying minor bugs. Avatars now follow the laws of physics more strictly and realistically when they disappear behind stationary objects, trees & turns. The camera now follows your trajectory precisely on turns so your avatar doesn't disappear offscreen. The avatar's movement on turns is also more realistic.

You can see it all in action in this neat review from our friends at SMART Bike Trainers.

It's important to stress that this is not a radical overhaul of the app or the way it is used, but a refinement and enhancement of the existing experience if you're riding an OmniMode route. Users who are used to riding on ROUVY can continue to do so in the same way. It'll just be better.
From now on, new OmniMode routes will come with OmniMode as the default setting so try them out if you haven't done so already. However, if you prefer the old way of using ROUVY, you can turn off the Auto 360 camera view and keep the fixed forward view. Controls can be manually adjusted in the app so you can play with it and find what works best for you. You are in control of the way you ride.

We will continue to add 'basic' AR routes but new OmniMode routes will be introduced at the approximate rate of one a week.

Lauren is an experienced rider, ROUVY ambassador and proactive moderator on the FB boards. She's already tried out the new features extensively and is impressed:

“I'm thrilled. It will make online group rides and races more enjoyable. There will be no bunching or overlapping and instead, the riders are perfectly displayed individually, giving the rider an improved view from all angles. In races, this will be great for tactical reasons - now you can look back over your shoulder and see who is closing the gap and still see what lies ahead. I also really like the ability to now see more of the scenery all around you with better visibility. I love it!”

Straight from the Horse's Mouth.

OmniMode is the 'baby' of ROUVY's chief research officer Jiri Samek, who has been working hard on it with his team and is now delighted to share it with the ROUVY community. Here's what he has to say about it:

"OmniMode is the next level of AR technology for ROUVY. What we have released so far was just the first step to establish the concept and this shows the direction of how we intend to develop it in the future. We want to create more of a 3D, 360 degree experience with better freedom of movement.

There are two main big advantages with OmniMode. Firstly it creates a far more realistic experience for the user with a more immersive visual experience. For me, that's the most important and exciting thing about this. The trajectories are much better, the movement on gradients is more realistic and so the feeling you get is more authentic.
Secondly, it also opens the door for users to be able to upload their own routes in the future as this technology is far more reliable. The potential opportunities this new technology has for developing usable 3D spaces is huge.

Previously routes were recorded using a Go-Pro Max camera recorded by our own technical teams. We did try to allow users to upload their own routes but the available technology at the time wasn't able to provide satisfactory results. This new technology with OmniMode makes that option now possible so it's something we'd like to reintroduce in the future.

The new OmniMode routes we have introduced are recorded using professional cameras which allow better resolution but it is still possible to record the 360 routes using Go-Pro Max.

We've been developing OmniMode for a year and getting all the new features to work smoothly and automatically took a lot of work. We always felt limited by just having one view so one of the original inspirations was the desire to create an experience with more (and better) views. We can now build from here to add even more features. We plan to liaise closely with the ROUVY community to get their feedback and find out what they would like to see, what new features they would appreciate, so that we can build it with their input."

Looking to the Future

On launch, we have introduced 8 OmniMode routes so try them out and we would love to hear your reaction. As Jiri Samek says, your feedback is very important and it will help us plan and determine how we can continue to improve the app for you.

The OmniMode library of routes, complete with Strava Live Segments, will be gradually added to, providing a wide choice of routes with a range of gradients. We are also introducing a new Video Player to the app which will create much smoother, clearer playback.

Coming soon is a new Companion App which will give you more control during your ride at your fingertips.
This new technology has many applications and opens up new possibilities which we are very excited about. Advanced 3D mapping? Off-road routes? More riding options? Who knows.

So the view of the future with ROUVY is not only rosy but now it comes in 360° and we look forward to building the ROUVY road forward with you.

But enough reading. It's time for some riding! So make sure you've downloaded the latest version of the app (version 2.15.0 or later) and try out OmniMode NOW!