As a part of The Tour de World, I'm sharing exciting cycling facts about each continent, and North America is next up on our exciting itinerary. Ride in the third largest continent, with its incredibly diverse culture, history and terrain, and one of our destinations is California's most famous engineering feats and historical landmarks. On another extraordinary journey, we will explore magnificent vistas of unique natural geological phenomena in Colorado.

North America is one of the most spectacular places to explore various terrains on a bicycle saddle, from the Atlantic seaboard of the east coast to San Francisco's iconic bike-friendly cycle lanes and the majestic and towering mountains on the west coast, like the Sierra Nevada of California's mountain range and many interesting places in the middle. If you enjoy miles and miles of vast and wide open spaces, you've found the right place! 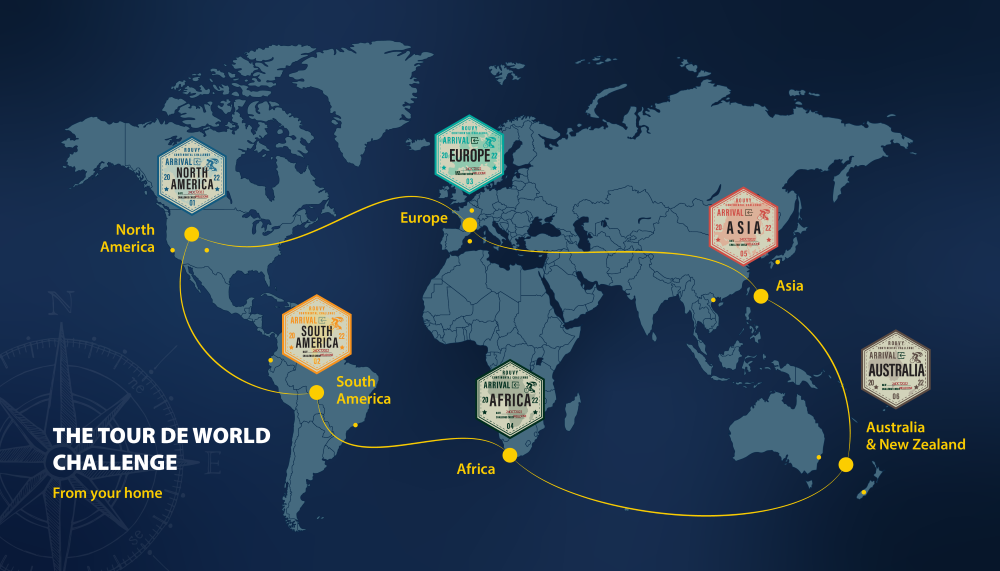 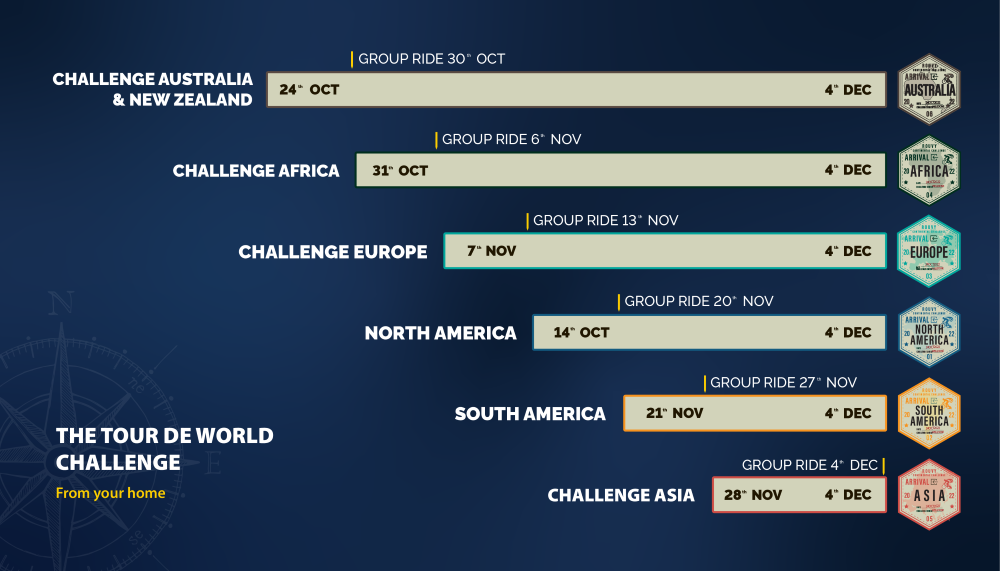 Originally called the Great American Bike Race in 1992, the epic Race Across America (RAAM) has grown to become one of the world's most respected ultra-endurance cycling events. The brutal event spans almost 5,000km across twelve states with more than 17,000 metres of ascent from the west to the east coast of the United States, and team racers have a maximum of 9 days to complete it, riding 500-800 km per day. Avid and eager participants travel from around the world to challenge themselves to their limits in various entry divisions, from solo to age group and mixed team events.

There is no specific travel distance per day and no designated rest periods for food and sleep, so sleep is optional. The event is timed from beginning to end, as in a typical cycle race, and the final finishing time includes rest periods. The winner will be the one who best manages fast riding with short and infrequent stops. The winner usually finishes in around eight to nine days, with approximately 23 hours per day in the saddle. Each cyclist or team has a support vehicle to provide nutrition, mechanical repairs and medical assistance. Overnight, a car with lights is required to follow each rider for safety measures.

Another ultra event is the Trans Am Bike Race which is similar to Race Across America in that it is also a non-stop cycle race across the United States, but it is longer at 6,800km, and riders are not allowed any support along the way. Riders have to be able to find their nutritional supplies and services themselves, and no support vehicles are permitted while traversing from the Pacific coast in Oregon to the Atlantic coast in Virginia, passing through a total of ten states.

Other famous, well-organised, popular cycle races in the US include Tour Divide, one of the world's longest, unsupported and most challenging MTB races, beginning in the rugged Canadian Rockies and ending in New Mexico over three weeks. Other well-known and less taxing but still testing races are The Silver State 508, Texas Hell Week, Red Rocks Century, Death Ride - Tour of the California Alps, Vapor Trail in Colorado and The Alaska Ultrasport Iditarod Trail. Whether you are an avid or recreational cyclist, the US holds numerous cycling opportunities and iconic places to ride and explore.

In the Tour de World Challenge on ROUVY, we head to the west coast and cycle across San Francisco's most treasured landmark and skyline, the Golden Gate Bridge, without a doubt, one of the world's most beautiful, unique, iconic and longest suspension bridges in the world. We start from the Presidio of San Francisco with its famous park & recreation area with wooded trails and historic sites. 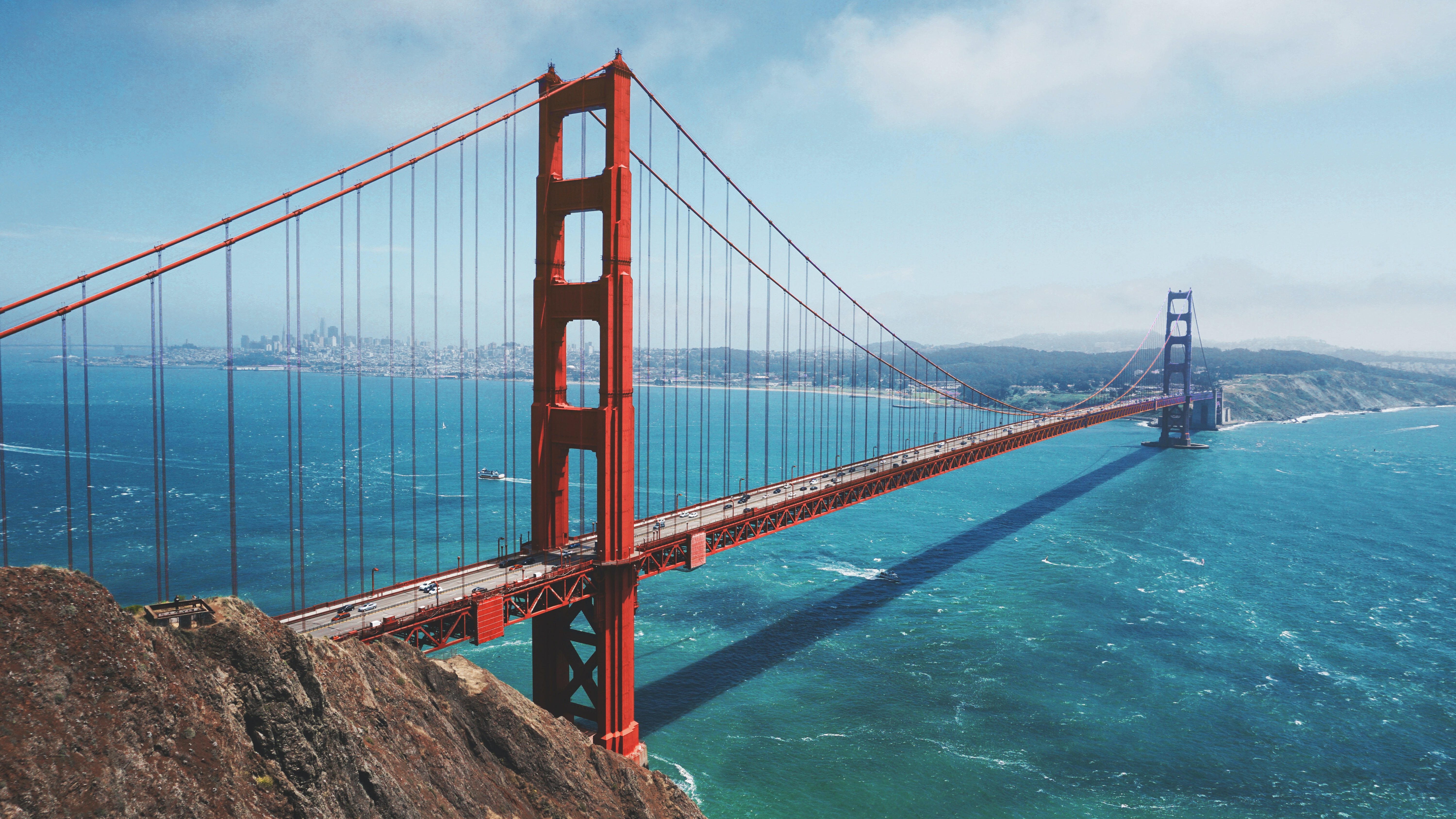 And then you spot it!

The bright red-orange colour of the bridge makes it instantly visible if there is thick fog which often engulfs the San Francisco Bay. We take a 2,7km tour across the bridge to the Marin Headlands and experience the beauty, the form meeting function, of this engineering masterpiece that stands at the entrance to California's San Francisco Bay and is a symbol of American ingenuity, constructed during the era of the Great Depression. 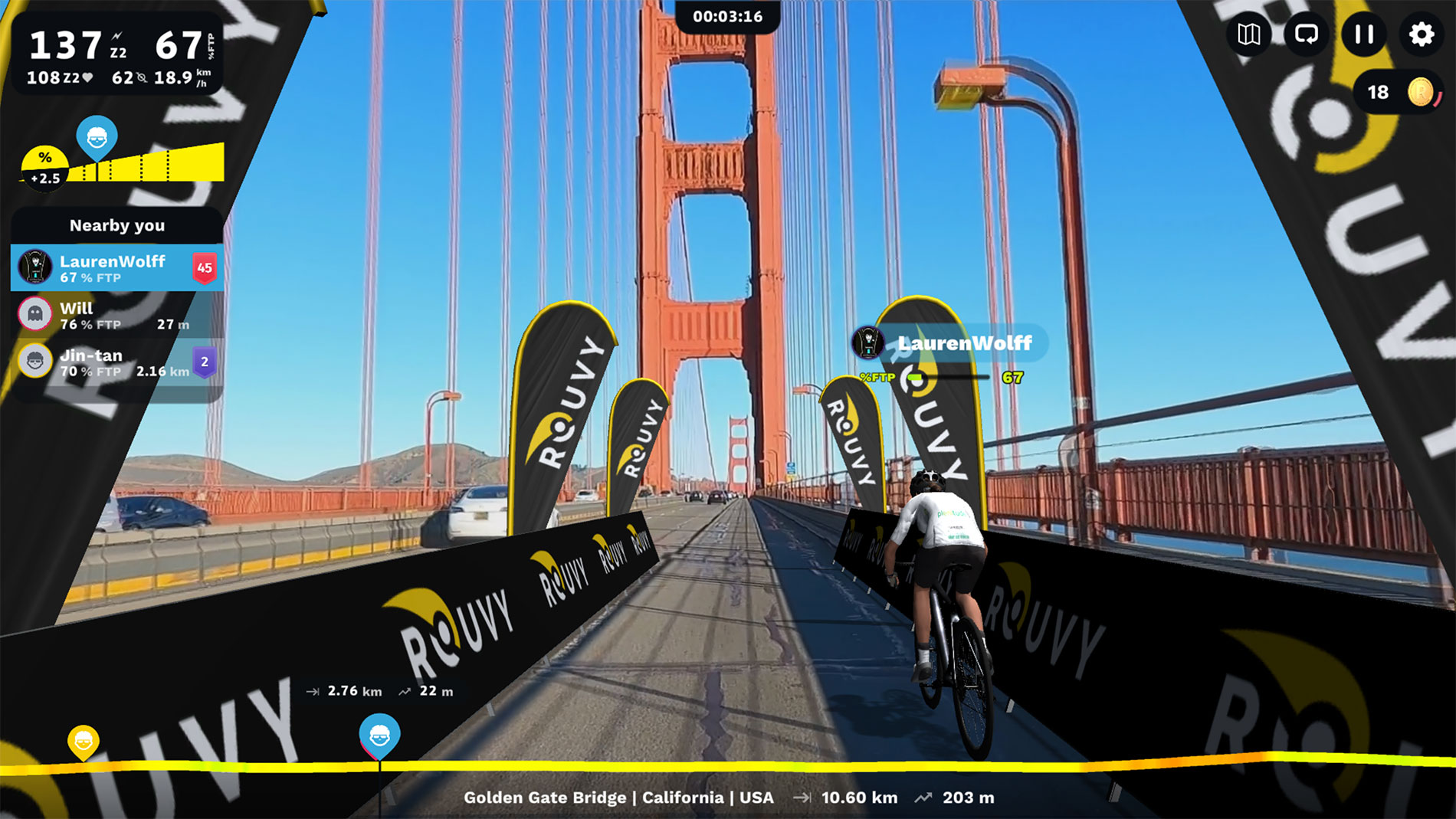 Next, on the Famous Tour de World Challenge series itinerary, we travel further east and do a short ride through the panoramic Garden of the Gods. The park is a National Natural Landmark, initially called Red Rock Corral until 1879, a natural resource rich in beauty, biodiversity and geology. The area lies in the southwest of the United States, in Colorado Springs, one of the most popular tourist attractions in the US where nature lovers can venture through the nature park for hiking, rock climbing, road and mountain biking and horse riding. 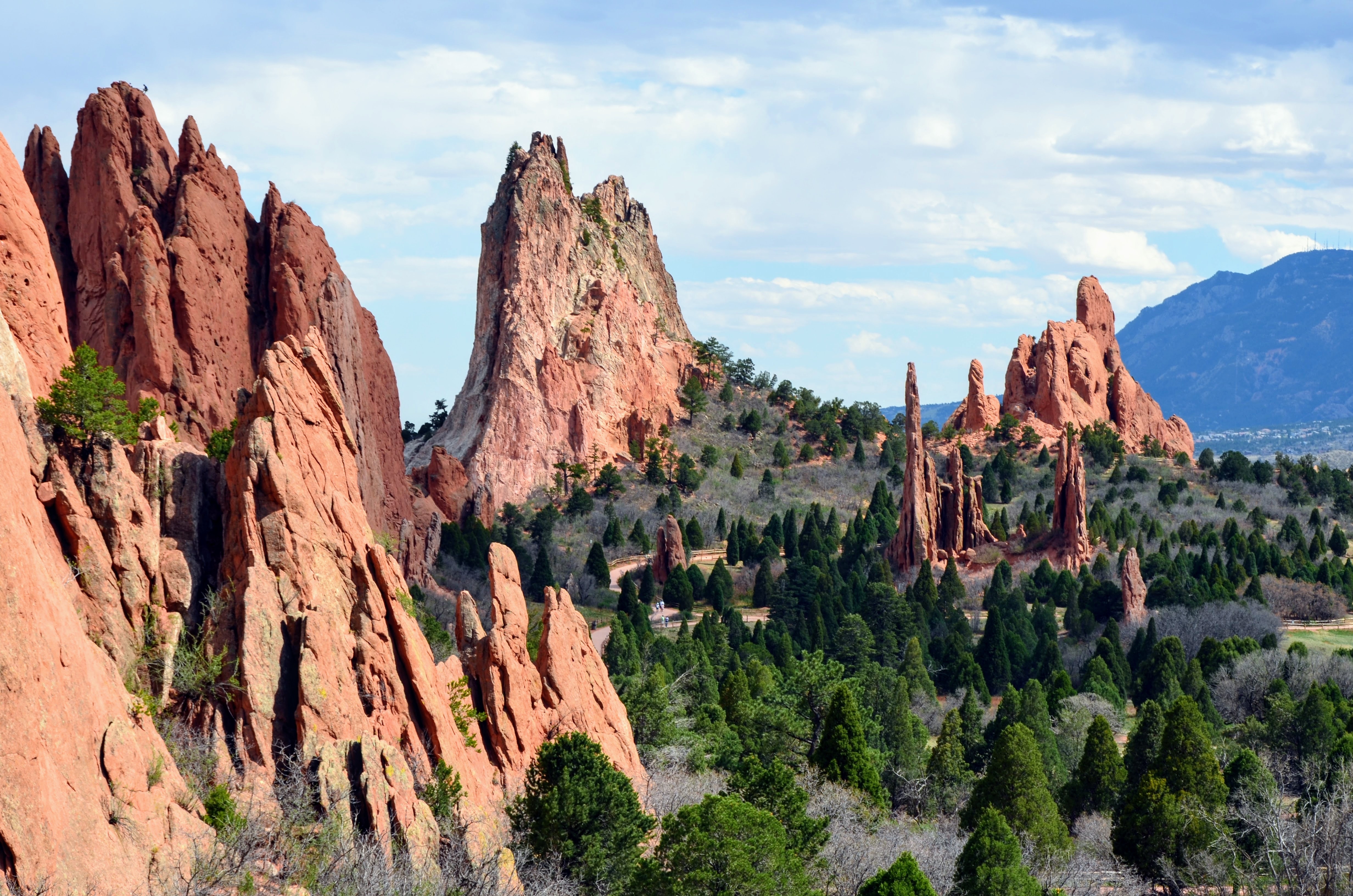 Garden of the Gods, Colorado Springs

The remarkable geological features of the Garden of the Gods park making the landscape so unusual are the unique and majestic sedimentary rock formations protruding from the lush green vegetation. These massive natural rock features have all been given unique descriptive names, such as the Cathedral Spires, Sentinel Rock, Steamboat Rock, the Three Graces, Balanced Rock and Sandstone Strata. The rock consists of deep hues of red, pink, and white sandstone, conglomerates, and limestone deposited horizontally and now tilted vertically due to the lifting up of the Rocky Mountains and the Pikes Peak massif over millennia. 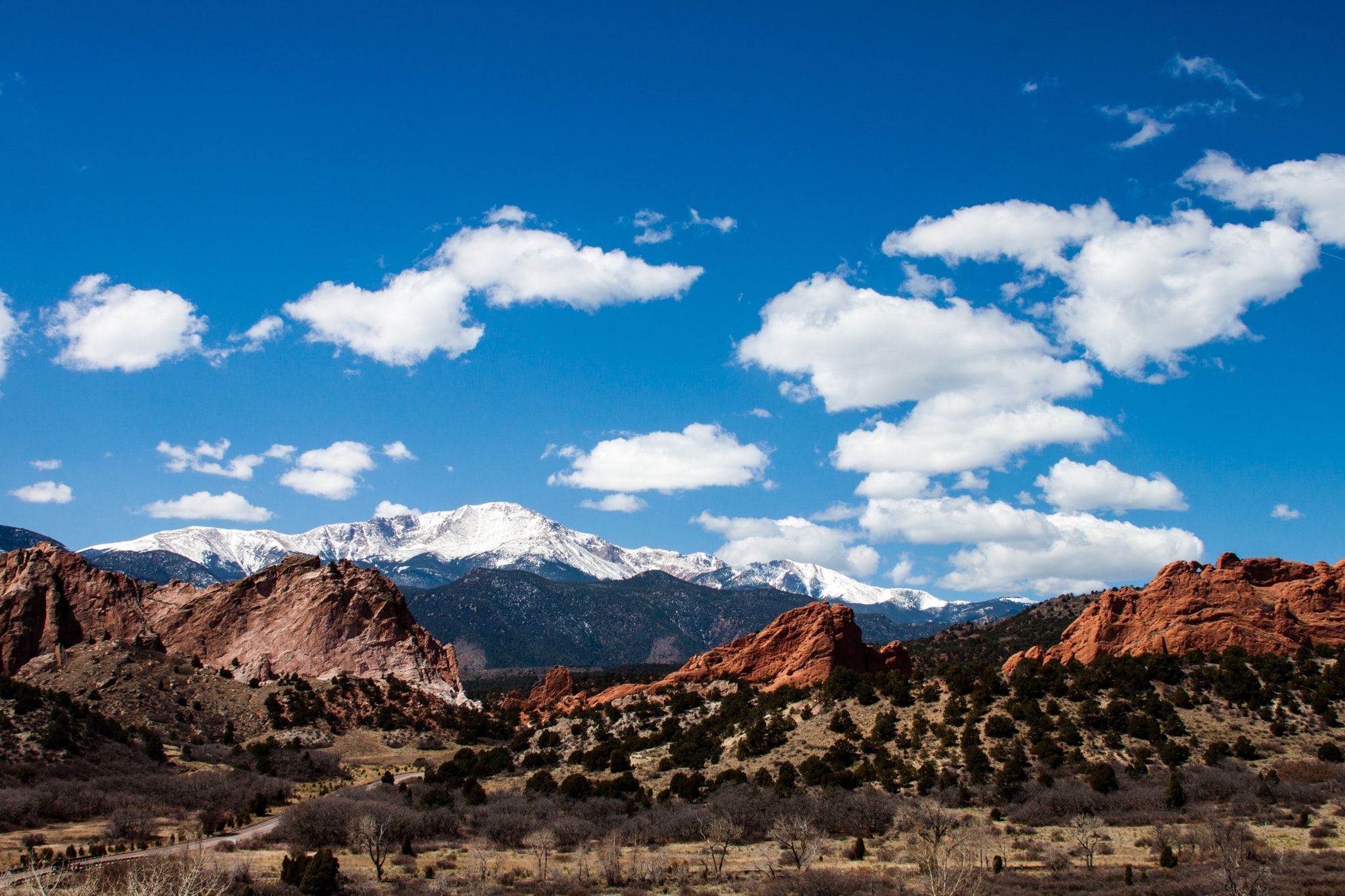 Rocky Mountains and Garden of the Gods

During your ride, consider how these ancient rocks formed as mountains that eroded and then were buried in their sediments over a period of over 300 million years, resulting in these slanted and precarious formations called ‘fins’ and showcasing a comprehensive view of the earth's history. The region was once an ancient sea, containing eroded remains of an old mountain range, sandy beaches, and great dune fields. Some of the wildlife seen here are mule deer, Bighorn sheep, elk and rabbits. 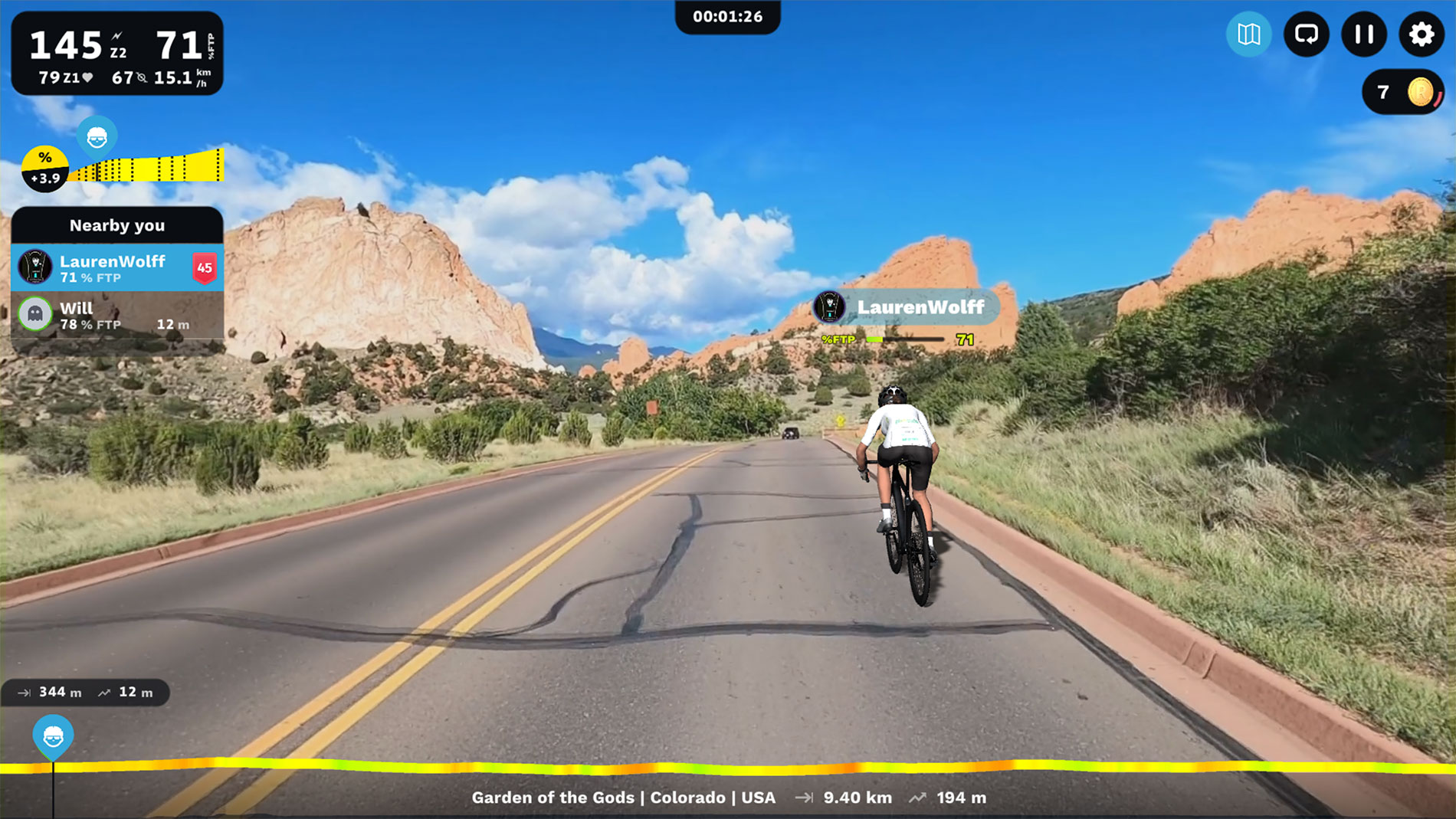 Enjoy the spectacular views in this unique natural park and watch out for the wild animals crossing the road in this Garden of the Gods video! 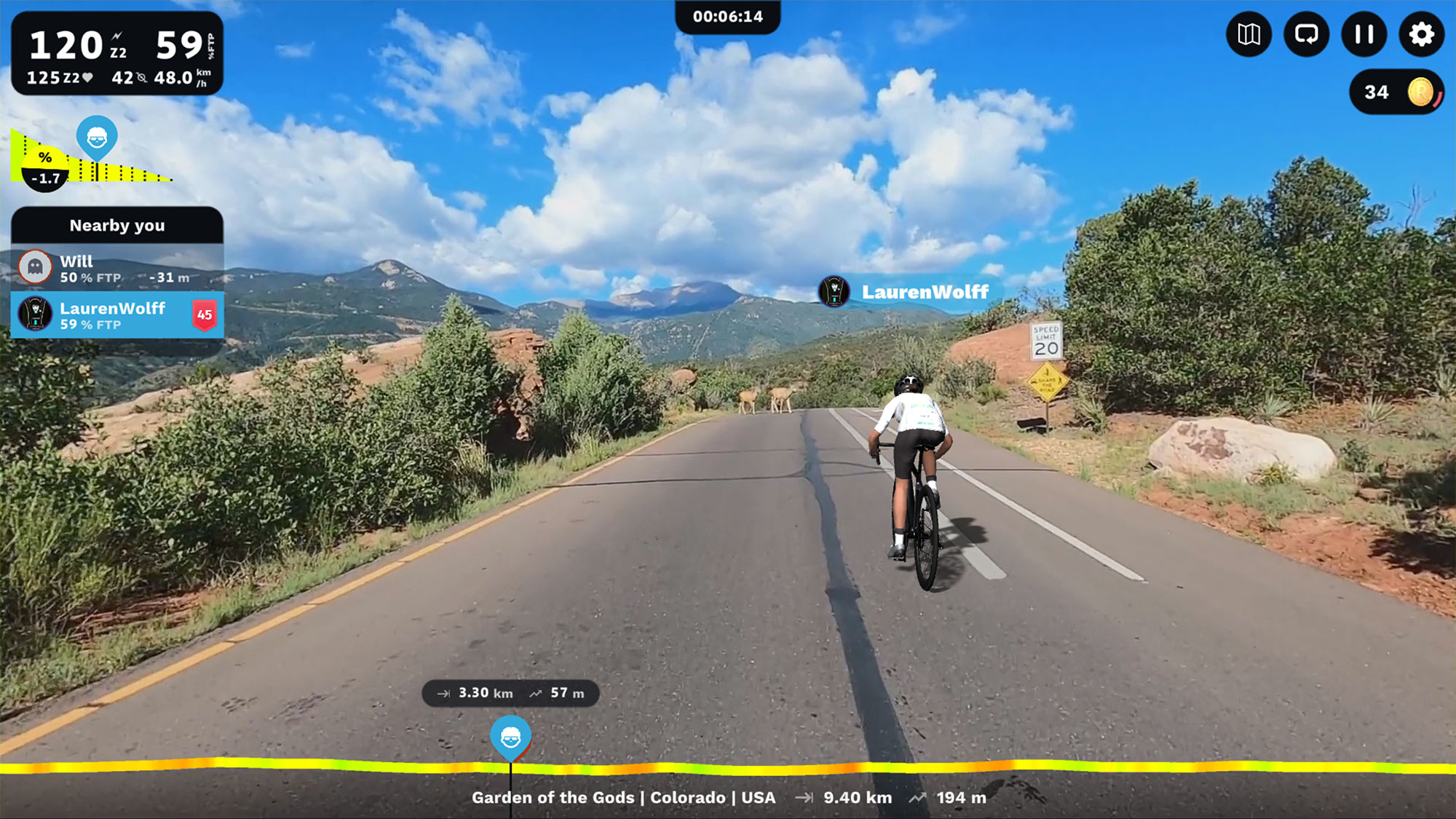 Look out for deer on your ride!

Other routes in the United States worth exploring and extending your travels:

Take part in the Famous Cycling Tour de World and experience these routes for yourself!

Tour de World is a unique event and challenge from Oct 24th for six weeks, allowing you to ride around the world, explore six continents, win some great prizes and get fit while travelling. You'll visit Australasia, Africa, Europe, North America, South America and Asia as you experience cycling around the world.

Get your passport stamped and a virtual jersey when you complete the challenges in Time Trial mode and enjoy your journey!