While browsing the Asia and Pacific route category folder, I discovered three incredibly exotic gems in Japan. I thought these would be fantastic to explore and possibly take you on a trip you'll never forget. Find the routes in the app, and we are on our way! We will venture along segments from roads along these iconic and scenic places you have probably never been before. So, no need to board a flight, and let's explore Japan on Rouvy, virtually from home on your trainer.

Explore a segment of Lake Biwa, Japan's largest and oldest freshwater and inland lake, situated in the Shiga Prefecture, northeast of the cultural capital, Kyoto, formed about four million years ago. The Biwaichi Cycling Route is a picturesque road that encircles Lake Biwa against a scenic backdrop of vibrant and colourful flowers and foliage, terraced rice fields, traditional villages and historical shrines and famous spots. The route around the lake is about 200km, and part of the north side (Hock) is where the Rouvy segment ventures. Motorists and cyclists travel on the left side of the road in Japan; therefore, the route around the lake is usually done in an anti-clockwise direction providing an up-close picturesque view of the lake along specific bike lanes in sections next to the main road, depending on one's level of fitness. 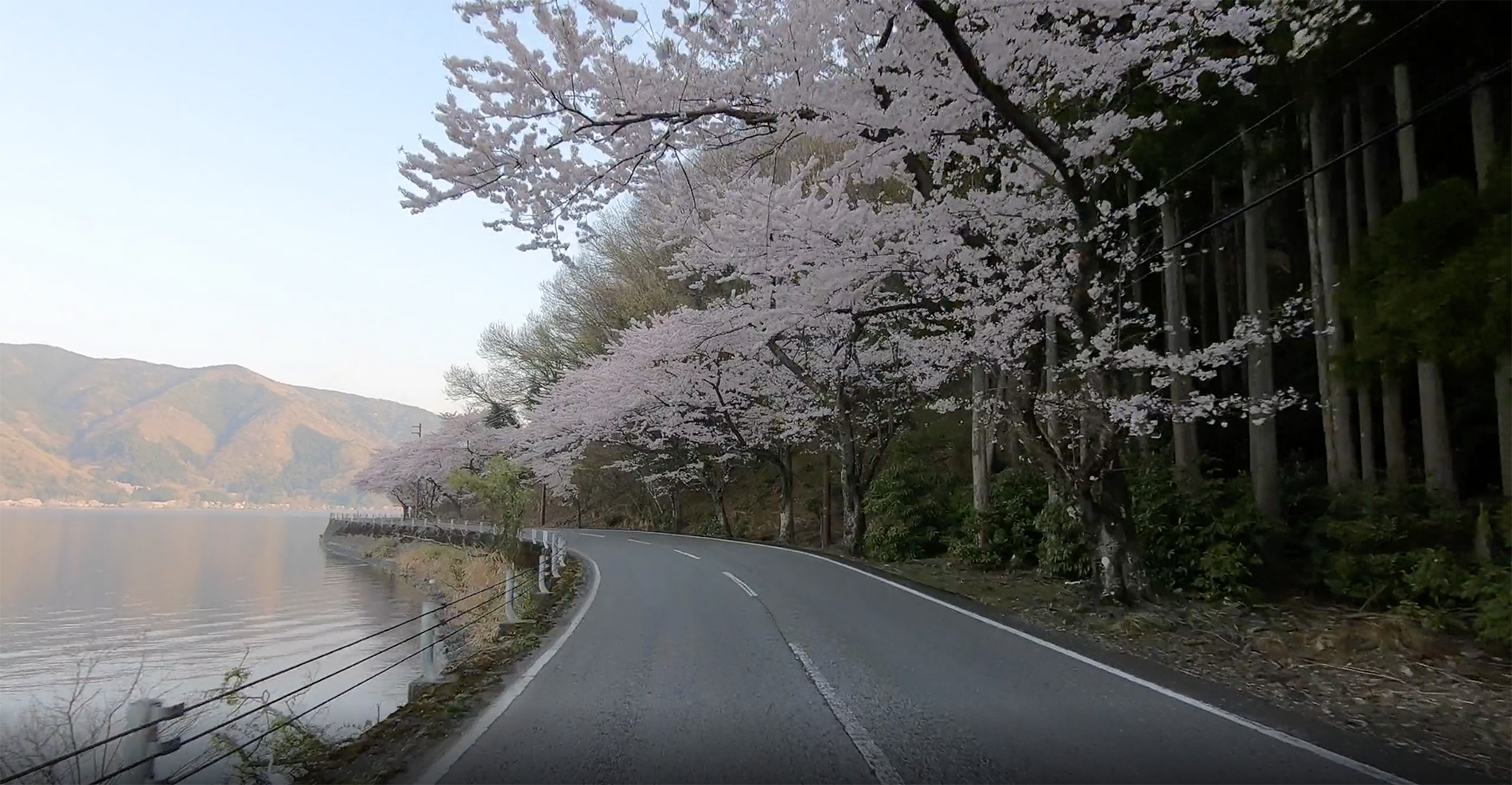 The beautiful lakeshore is famous for its biodiverse ecosystem, and magnificent scenery captures a panoramic landscape creating an enchanting atmosphere. The views capture the vibrant seasonal colours that change throughout the year displayed in all their glory: it is springtime and lining the route are an abundance of pink cherry blossoms framing the road as it meanders along the water's edge. In summer, the willows' branches sweep elegantly and gracefully, caressing the water's surface. In autumn, around mid-November, one can enjoy the bright crimson red and golden leaves providing a firey warmth.

The Rouvy segment has fantastic panoramic shots to show one an extra dimension of the vistas available that one would not usually see looking straight ahead. By capturing stunning images with horizontally elongated fields of view at strategic spots in the video, one can enjoy another viewpoint to add to the realistic experience. Enjoy the atmosphere and beauty of spring in this natural setting virtually on Rouvy. 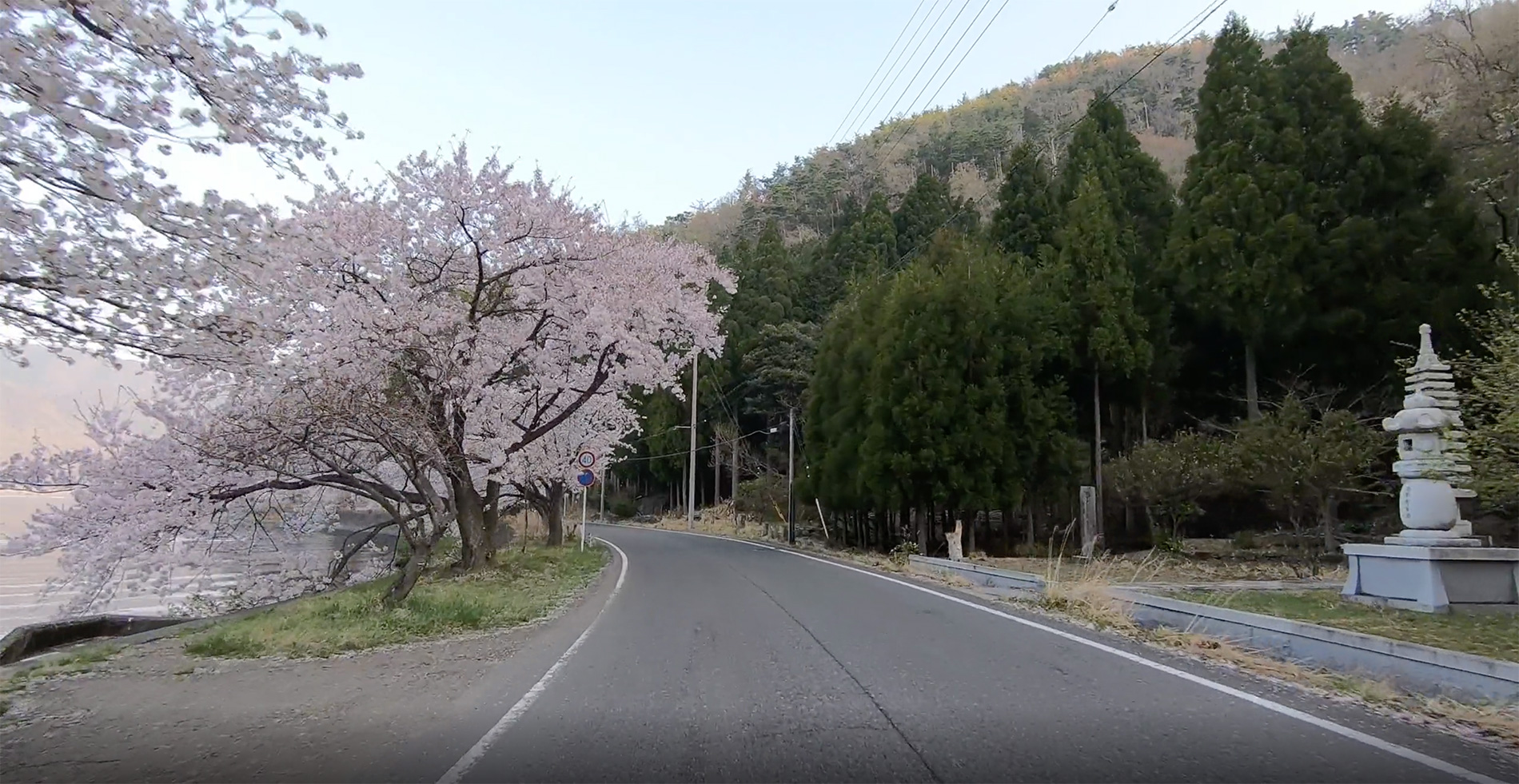 Be sure to do a short warm-up before you start this route. The start heads up a 3,5 km climb of 186 m on the way to the Tzuzura Osaka Observation deck with an average gradient of 5%. You'll turn around at the top and enjoy the views on the way down, followed by a flat stretch to the end for a further 12km.

Shizuoka means 'calm' in Japanese. One can feel this natural location's stillness and zen atmosphere as we travel further east and find ourselves on the peaceful and winding coastline of the Shizuoka prefecture southwest of Tokyo. The area provides a good mix of Japanese terrain: majestic mountains, clear streams, steaming hot springs, rich agricultural land, and plenty of coastal beaches. The section we ride runs along Suruga Bay, is also referred to as Japan's Riviera, because of its beautiful beaches, hot springs and ocean views. 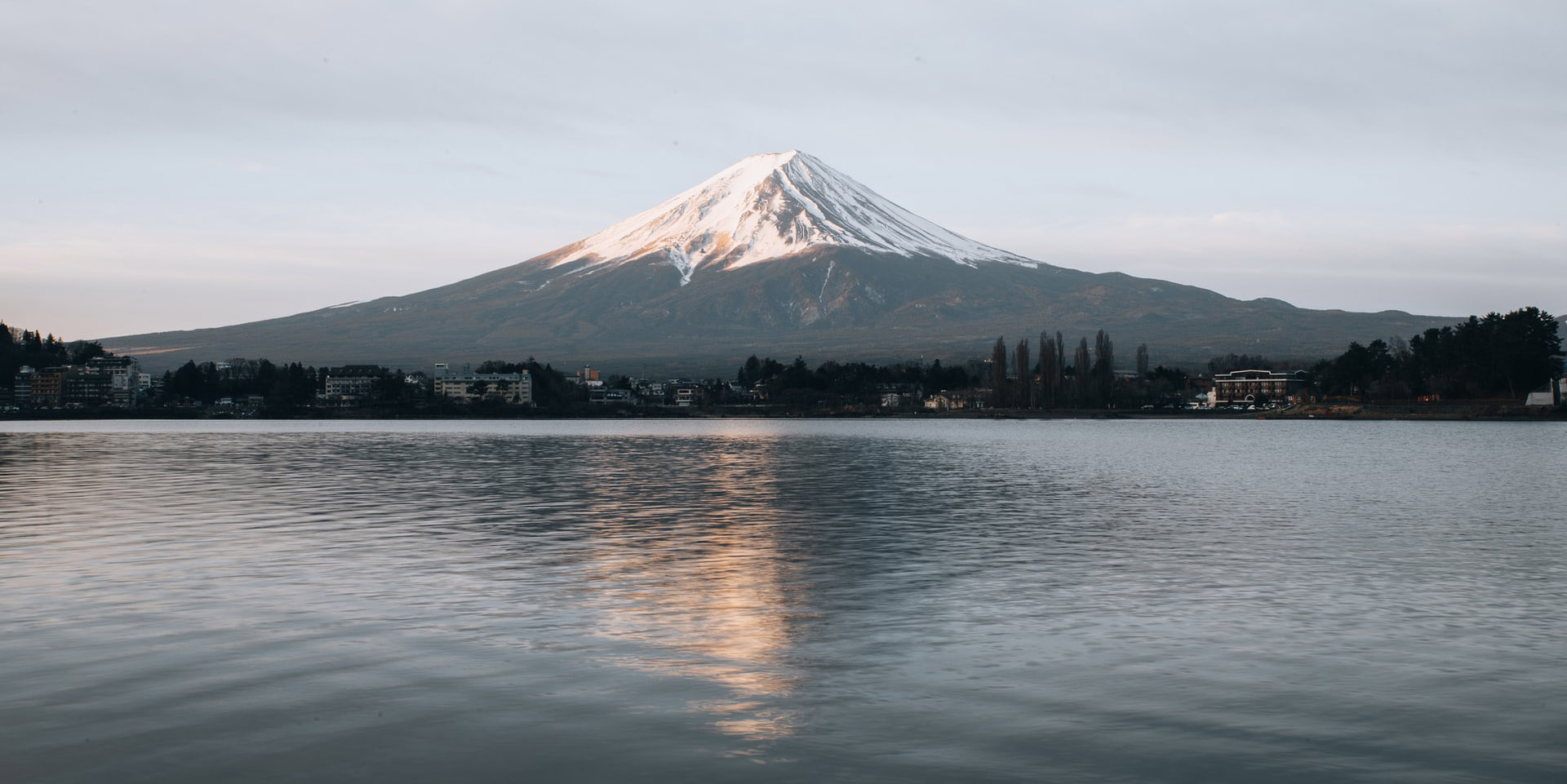 The city is a well-known tourist destination because of its spectacular views of the majestic and iconic white-capped Mt. Fuji, the national symbol of Japan and a World Heritage site. Around the foot of the volcano is the highest concentration of religious Sengen shrines that worship Mount Fuji. And because of the rich and fertile topography of the volcanic soil and clear springs emerging from the volcano's foot, it is one of Japan's most famous tea-producing regions, known as the Kingdom of the Green Tea'.

Japanese cuisine of the area consists of Sakura shrimp, famous for its sweet taste, savory Oden served on a stick, and Gyoza pan-fried dumplings. But if you know and love eating Sushi, there is another world-famous delicacy and the genuine type only produced in Shizuoka - Wasabi grown in the essential water from around Mt Fuji. 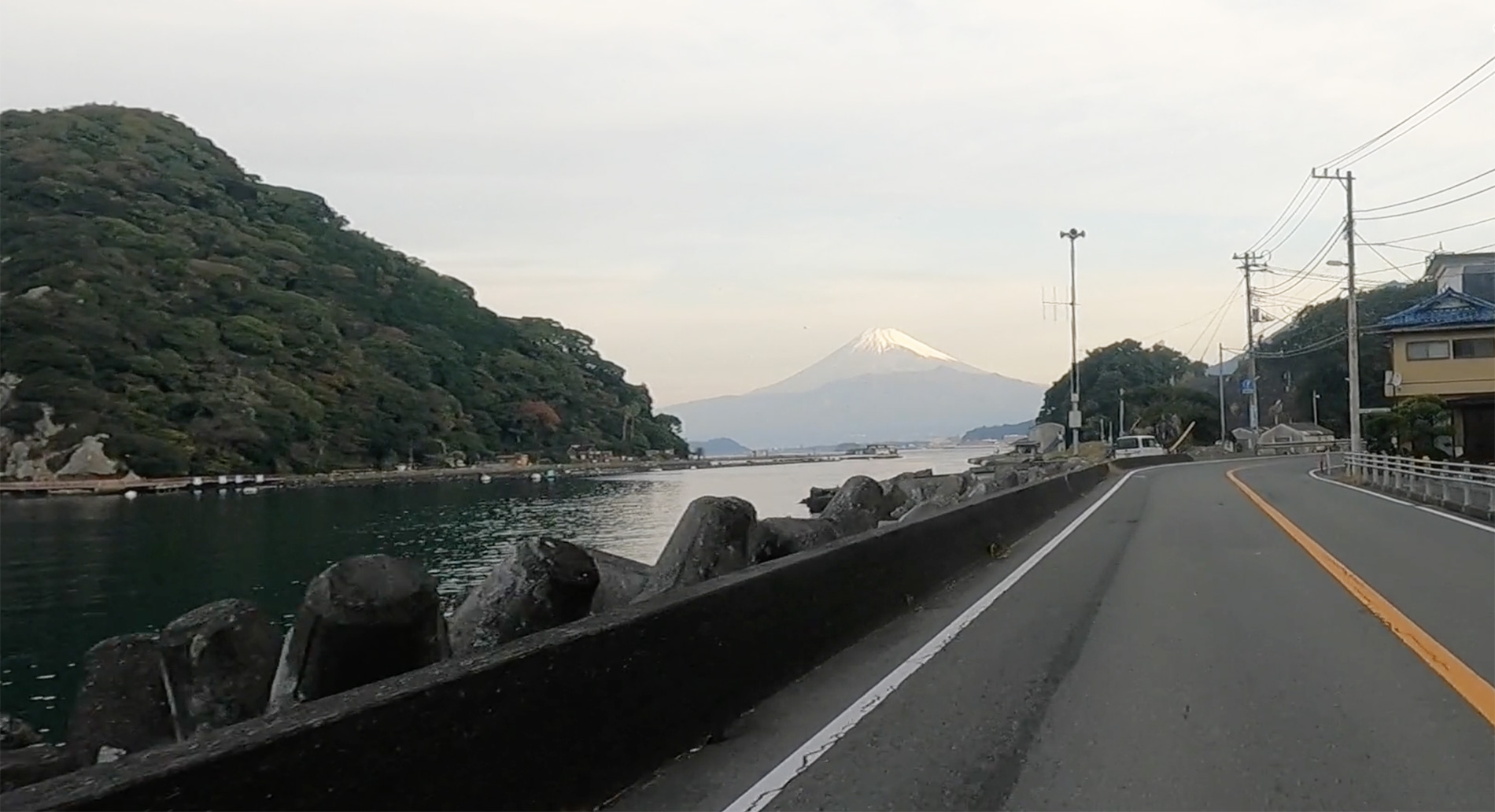 Enjoy this flat 18km coastal and picturesque route, and look out for the majestic Mt Fuji on the horizon about halfway into the course.

Kochi is a cycling paradise and a unique gem!

While heading along this idyllic route, magnificent scenery will surround you: mountains, gorges and ravines formed from erosion by the river over millennia, bordered by lush virgin forests, rice paddies and glittering waterfalls and valleys. In addition to the magnificent sparkling and winding river, one will cross over the famous chinkabashi, or low water bridges, that arch across the river. These sturdy bridges are designed without balustrades or side rails and can withstand rising flood waters. Take a look at what you will see on the Niyodo Blue river but from another perspective.

The magic of Niyodo Blue

The Niyodo River is famous for the purest and clearest water quality of any river in Japan and is factually the most beautiful in the country. The Niyodo flows for 124km through Ehime and Kochi prefectures from deep in the mountains of Shikoku and finally into the North Pacific Ocean. The pure water, originating from its source high in the mountains at 1500m above sea level, remains translucent all along its course. 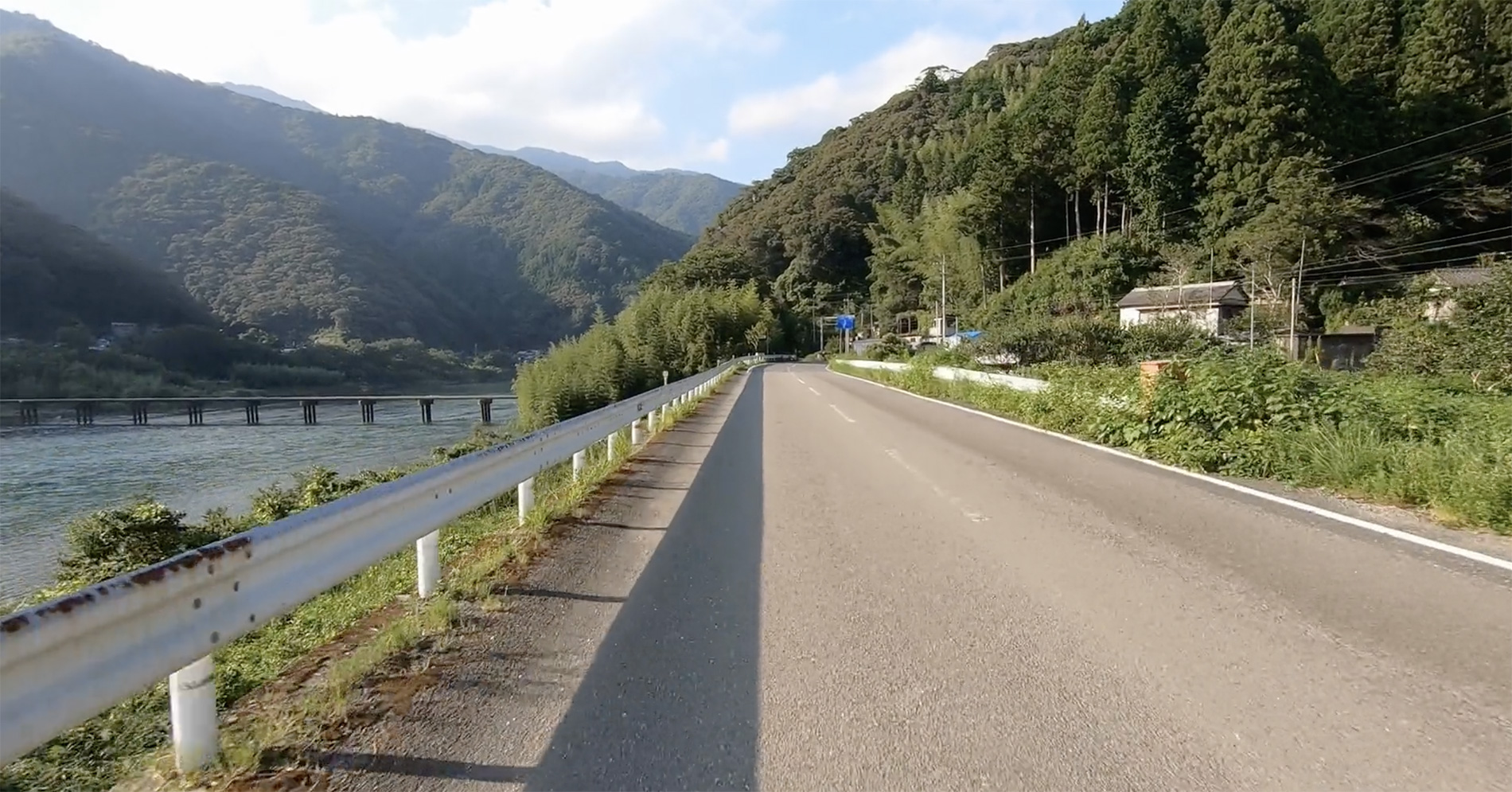 The name "Niyodo Blue" lends itself to the incredible clarity of the blue-hued water. The colour resembles the luminosity and translucency of watercolor pigments applied to paper. It's as though the paint was dragged lightly and delicately across the vibrant landscape, creating a shimmering blue ribbon. The water is so clear that the bottom is visible from a distance away, and one can see every pebble on the bottom. The water colour changes interestingly from blues to greens depending on the sun's position and the algae concentration.

The river as a natural resource providing prosperity

Ino, situated downstream at the river basin, is known for producing Tosa washi, a traditional Japanese paper made using the river water. This historical tradition of handmade paper dates back thousands of years, and its name still includes Tosa, the name of the old feudal domain that became the Kochi Prefecture. It is a well-known product, in Japan and other countries, because of its use in restorations of paintings and old documents because it is thin and strong. The thinness and strength are due to the paper mulberry material combined with this pure water. 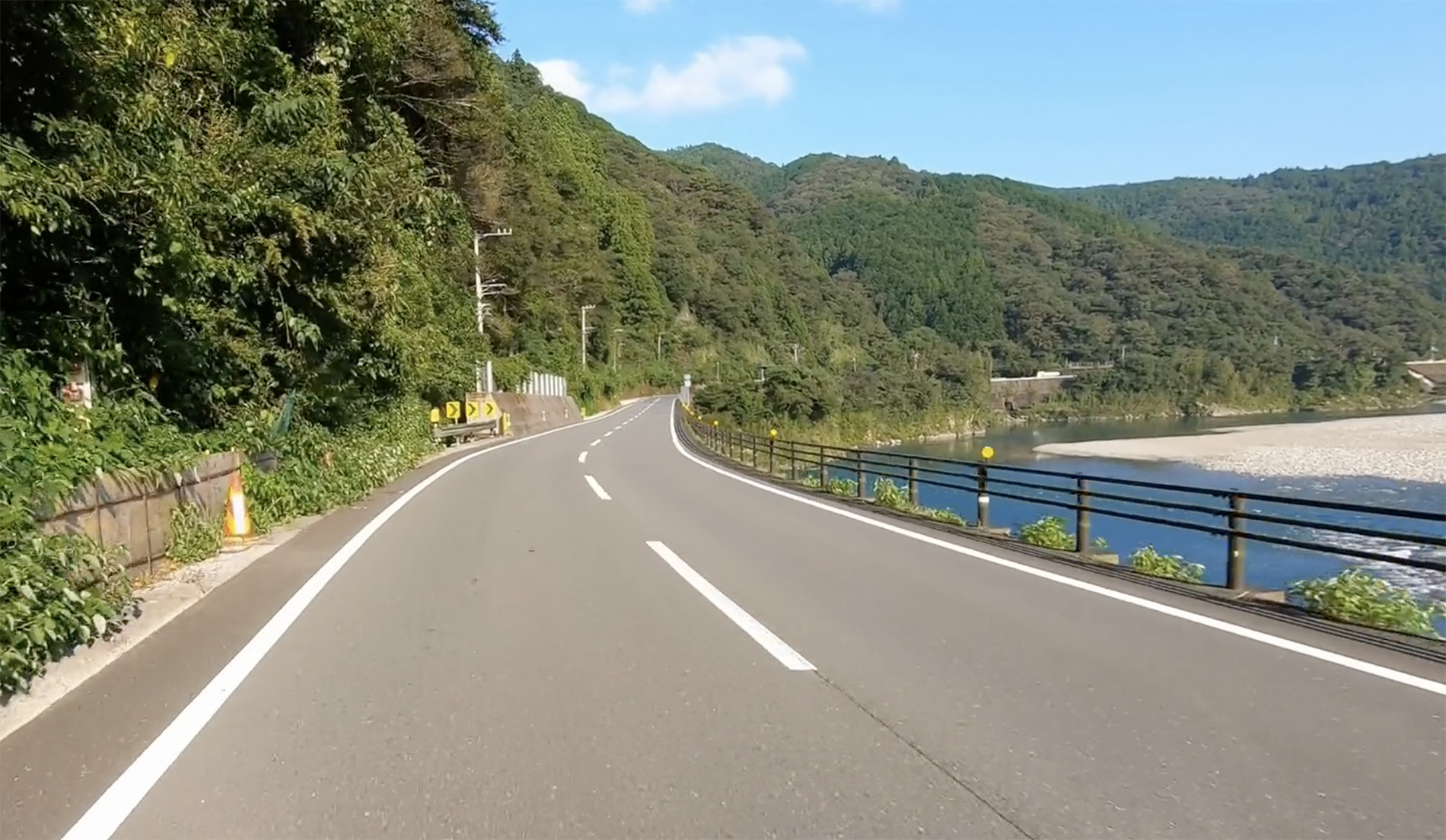 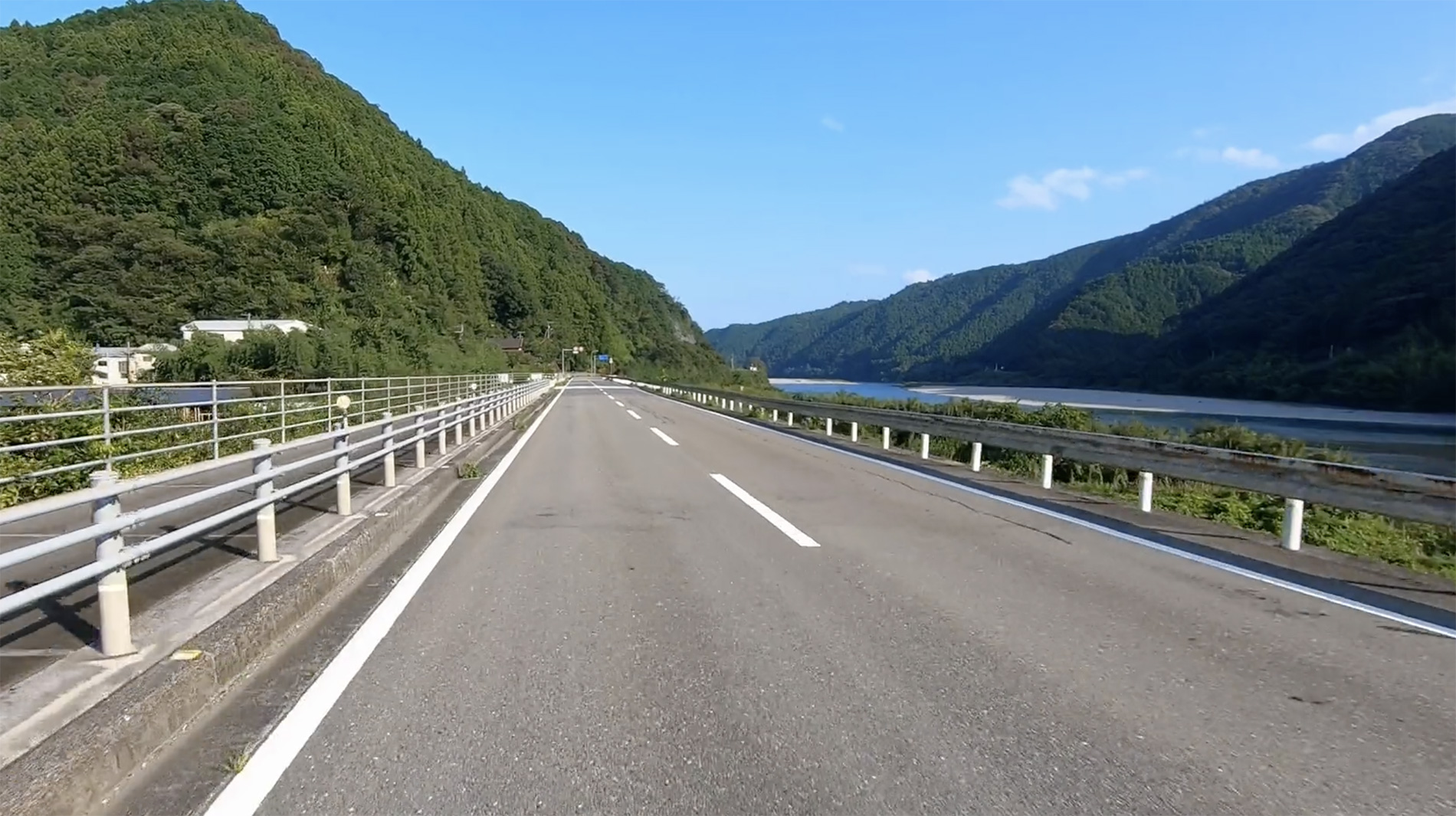 Enjoy this beautiful route along a flat profile for 26km while admiring the lush surroundings along this unique river. When you have time for a break along the way, relax in one of the hot springs or sip some locally-grown tea at s café. I'd stay away from the sake until the end though! ;-).