The Swiss Alps is a must for the avid and passionate cyclist who enjoys hill climbing, and the iconic Albula Pass (Tiefencastel) doesn't disappoint. Situated along the Rhaetian Alps, it is a spectacular example of a breathtaking Hors Category (HC) climb up the seventh-highest road pass in Switzerland, in more ways than one! 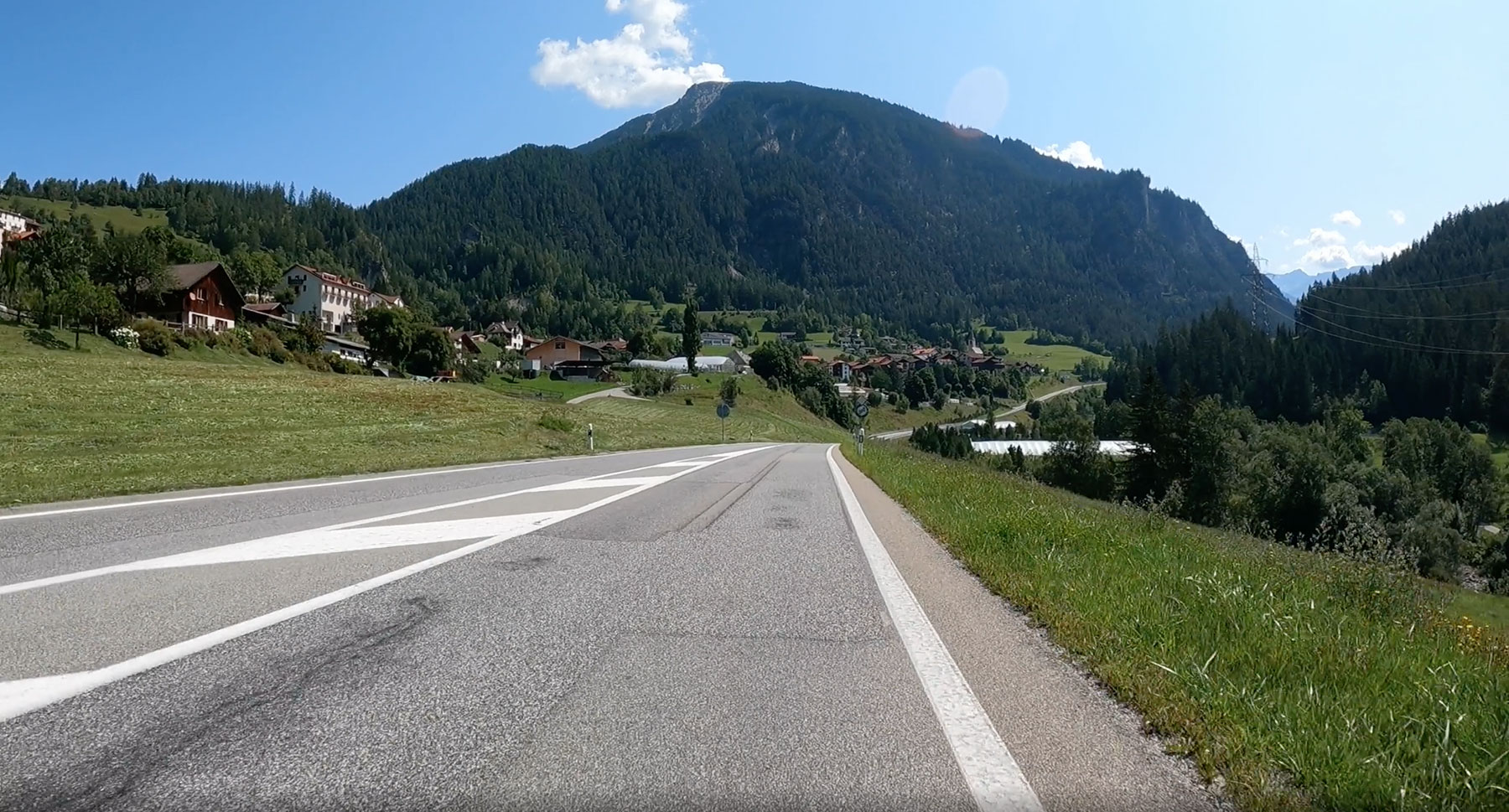 To reach the summit, one must surpass a gradient average of 6,3% over a distance of 23km and feel the maximum gradients in sections biting at 16%. But the scenery is sensational, and the beauty of the alpine landscape from the start in the green valley in the west in the stunning canton of Graubünden, tracing your way along the Albula river, is a scenic distraction that pays off on this long and magnificent climb. 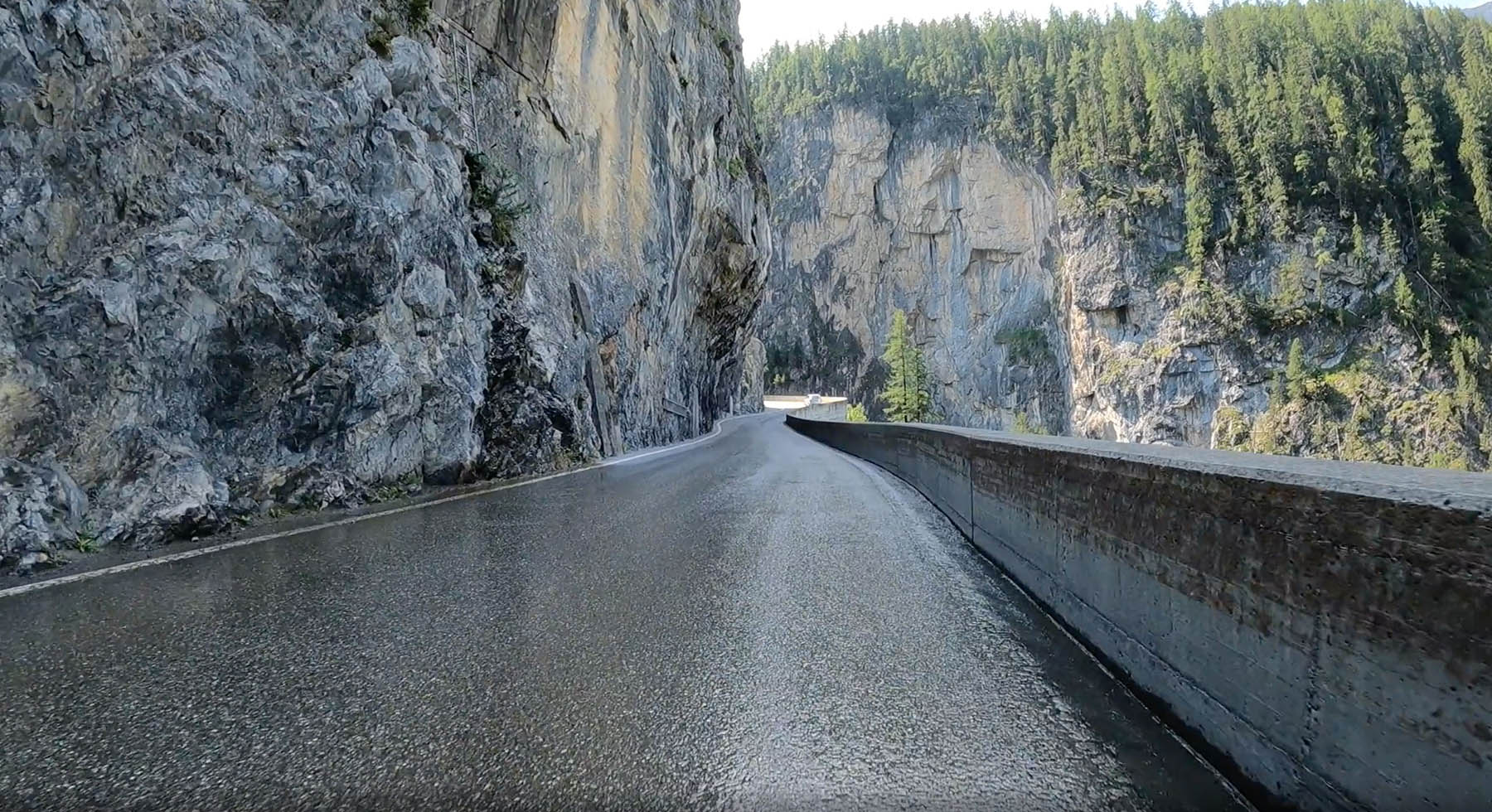 We begin near Filisur, the most western Engadin village and a national treasure, a location where the classic children's novel Heidi film was shot in the 50s and the starting point of the famous Rhaetian Railway, a UNESCO world heritage site. The railway winds its way through tunnels and over the impressive Solis and Landwasser viaducts as it climbs the Albula Valley towards St. Moritz. 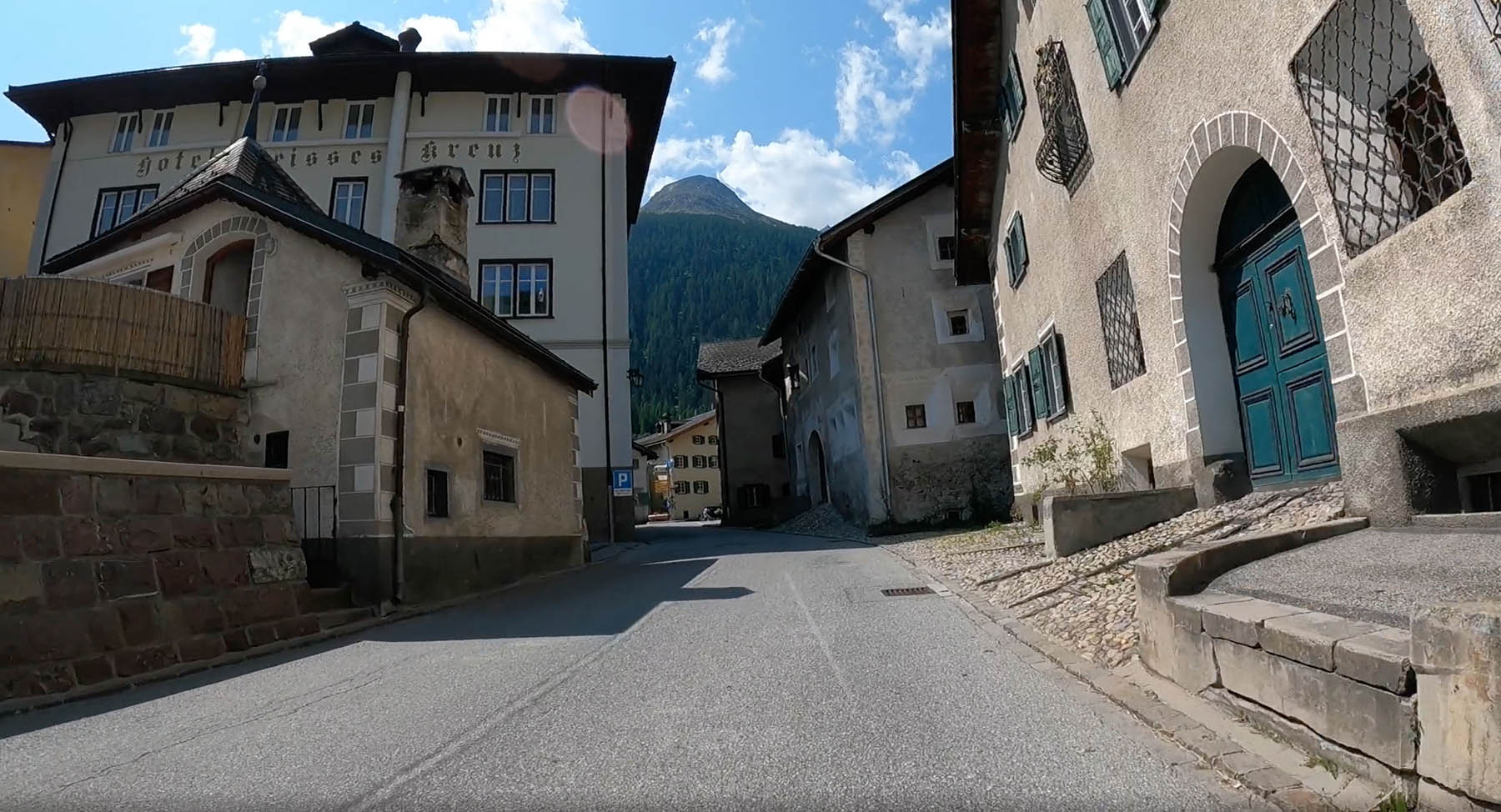 Pleasingly merged in the landscape, the 62km Albula railway line, built-in 1903, rising an incredible 1000m in altitude, is a masterpiece of engineering and a monument to the pioneering days of railway building. The railways follow parallel to the Albula Pass for quite a while, and if lucky, you can see one of the trains crossing over 60m above the valley floor. Here is what you can see from a different viewpoint that you may miss below while riding: SEE HERE 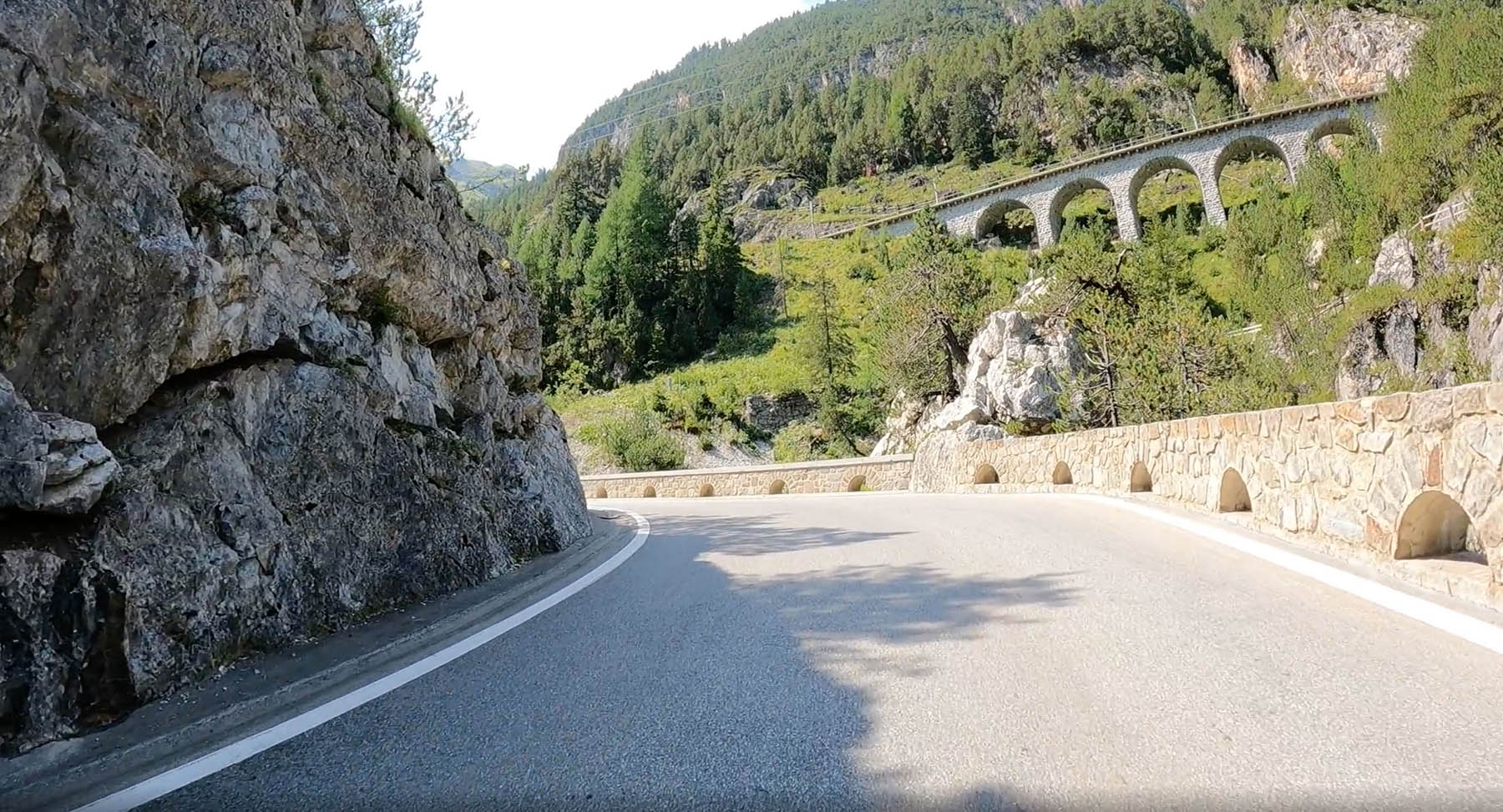 A Brief History of the Pass

In prehistory and Roman times, the pass was a mule track and trade route, and later, the track became a source of income for the Bishops of Chur, who charged a toll to maintain and even widen the trail. In 1695, for the first time, they used gunpowder to create a tunnel in the Albula Gorge that made direct access to the valley at Bergün. The widening of the road further between 1864 and 1866 allowed horse-drawn post coaches to use the pass to make the journey from Chur to St Moritz, and this improvement quickened the time to 14 hours of travel. 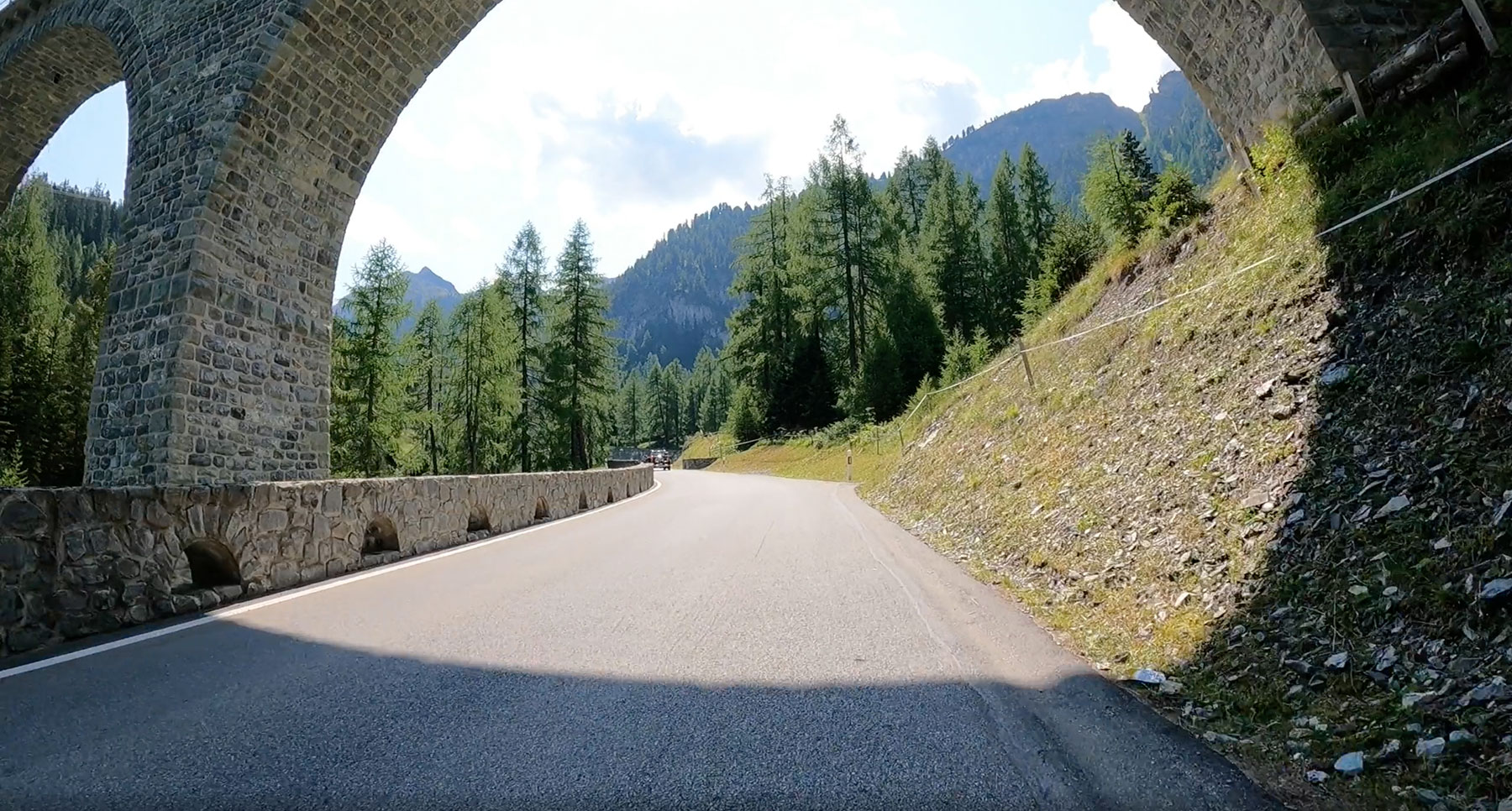 Today it takes 60 minutes to drive by car or 9 hours to walk. It was then a primary alpine pass between Lombardy and Austria. Since the beginnings of the railway, connecting the two locations with a 6km tunnel at 1823m height, the necessity and use of the pass declined. We now have a route available for its spectacular scenery via vehicle or by cycling on still sometimes very narrow roads. 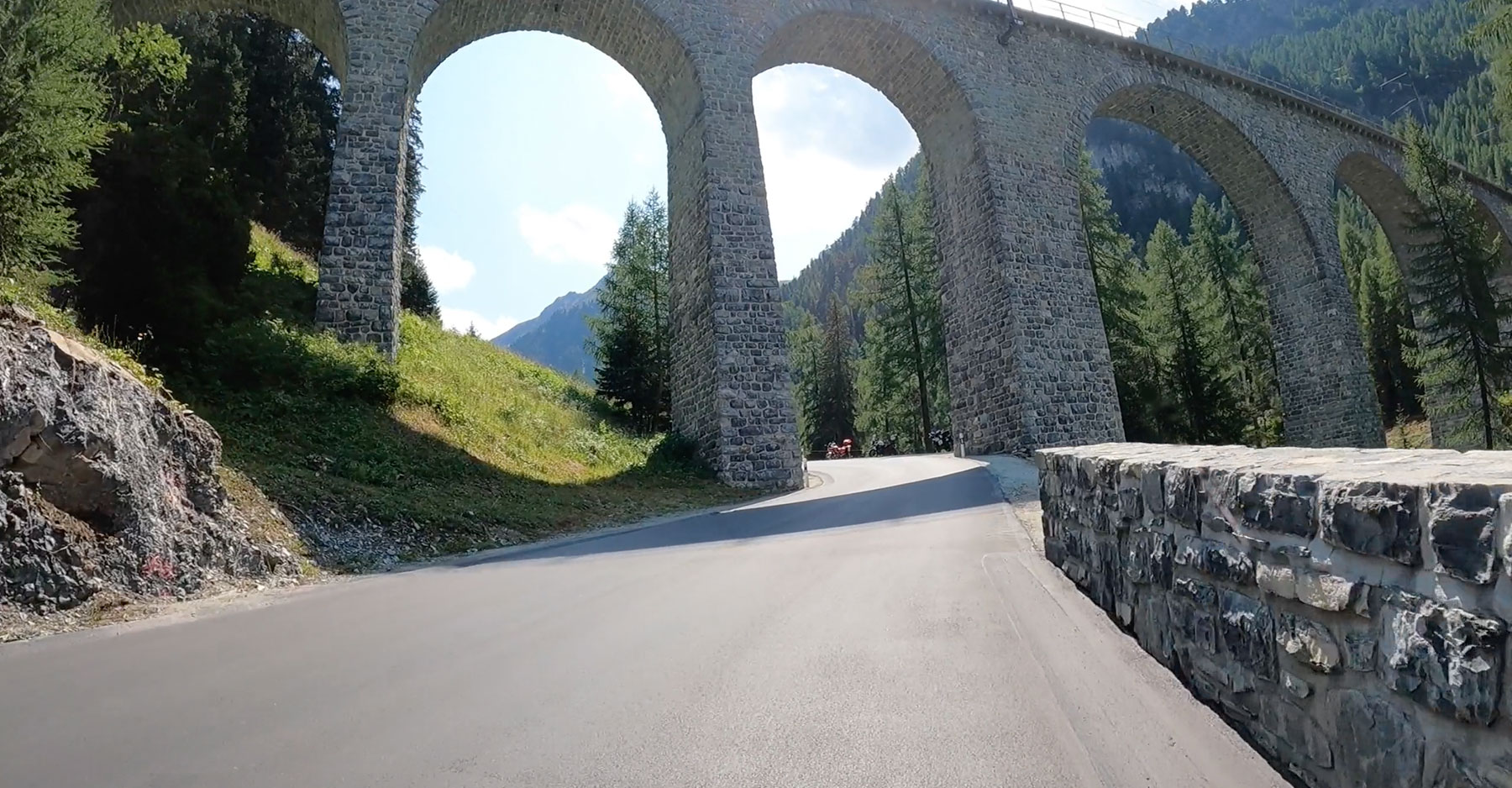 The 9-day stage race features in June and, coupled with the Critérium du Dauphiné, is considered the two 'testing grounds' ahead of the Tour de France. In 2000, 2006, 2013 and 2017, Albula was a key battleground for the pros to fight it out, and it was here where Jan Ulrich struggled on the pass and lost the victory. 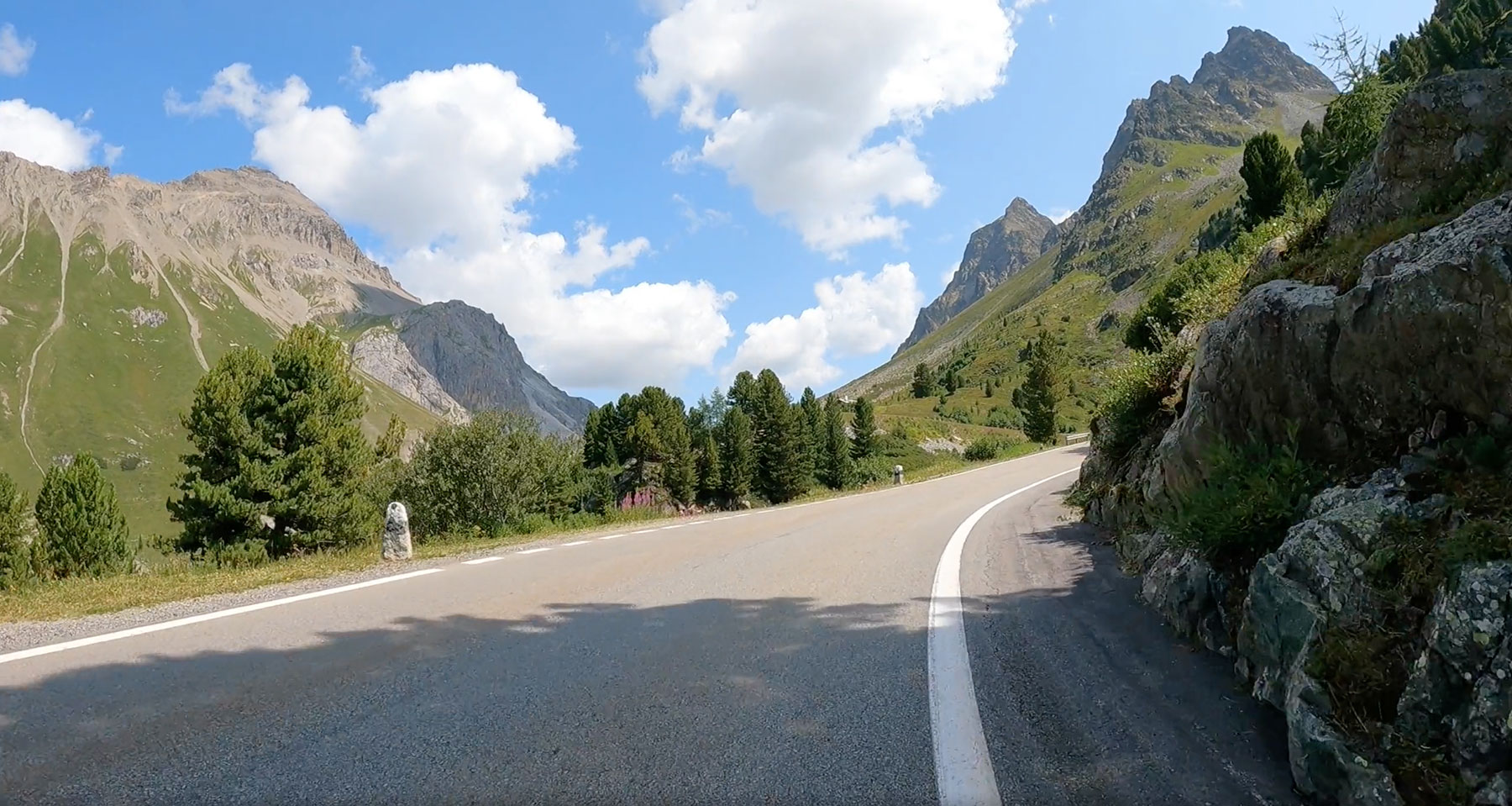 The first part of our ride to Bergün, at the 9km mark, takes us on a few snake-like bends averaging out at 4,2% and hitting a max gradient around 13,7%. Here, the steepest sections can be felt and seen approaching Bergüner Gorge. The rocky cliff faces rise grandly, seemingly stitched to the road's edge. The narrow valley between the mountains, with its steep and rocky walls and gushing stream accompanying us, is the natural focal point of this scenic and beautiful climb. As we approach Bergün, we see a small village with charming and decoratively painted houses in the Engadine style of the area. 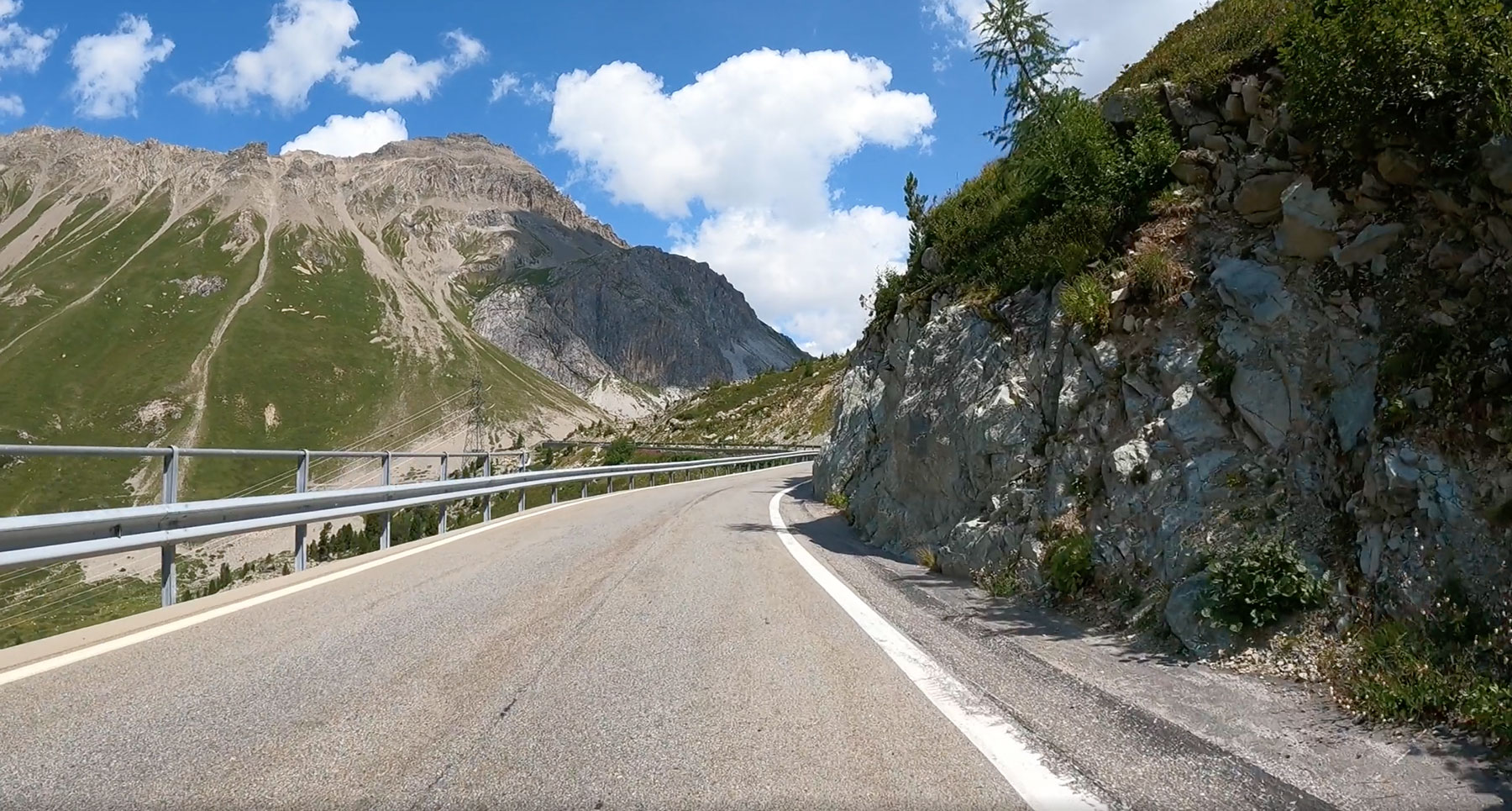 Moving on from the town, we climb towards Preda, where we will cycle underneath one of the viaducts of the Rhaetian Railway. One may hear the distant sound of the whistle of the red train. From Preda to the summit, the scenery opens up in all its majesty, and we have another 7km to tackle with a 7,2% gradient and 11% maximum grade. Look out for the magnificent bright emerald green Lake Palpuogna on the right, once rated as the most beautiful natural setting in Switzerland. The final kilometre to the summit averages at 8%.

As with many climbs in this area, it is long. Still, there are a few sections for recovery. At the same time, your eyes absorb and appreciate the beautiful panoramic views, especially near the top, where the vista opens up with an almost treeless landscape. 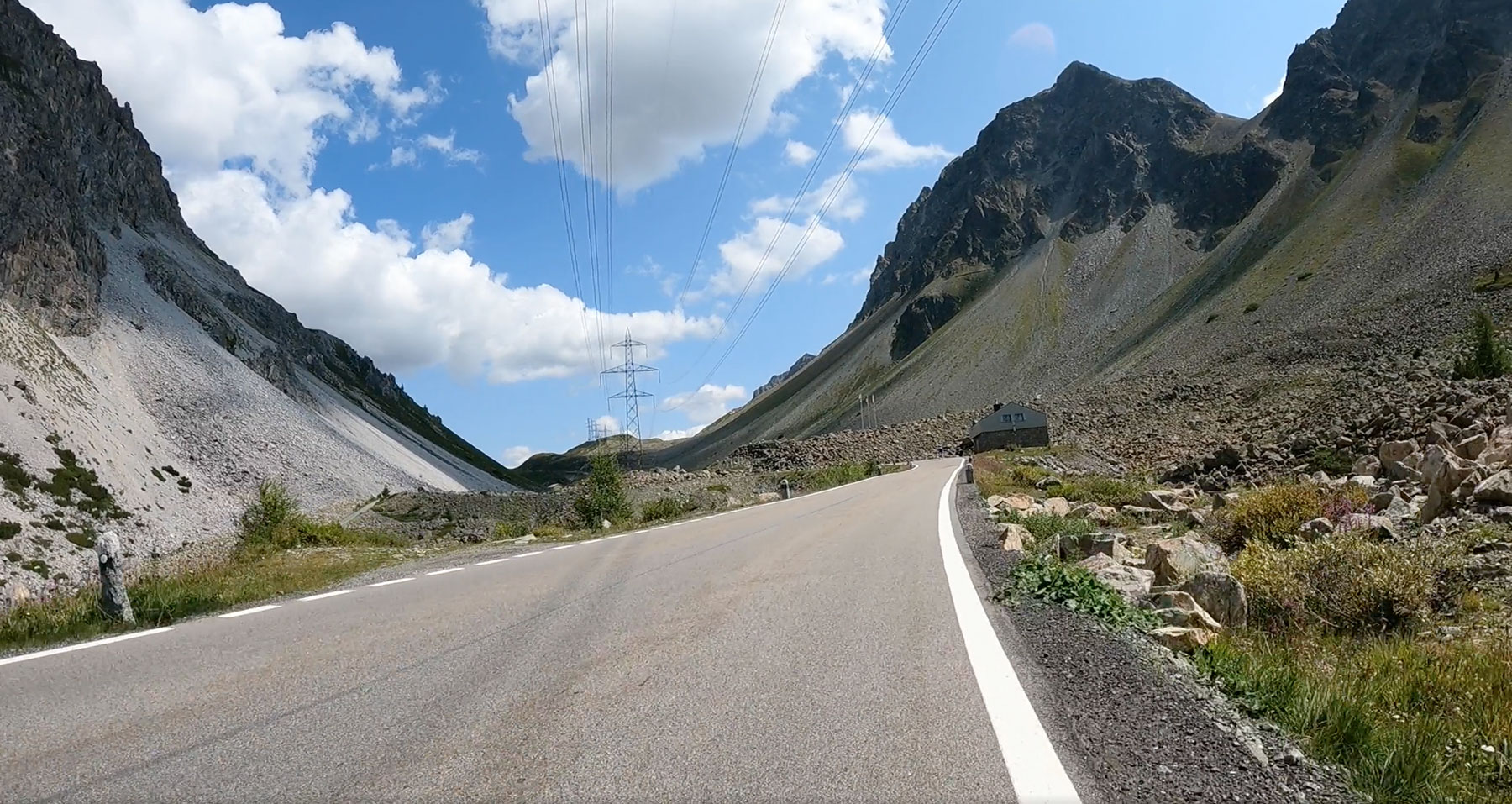 The first 5km, with an average gradient of only 2,5%, can be effectively used to warm up the legs if you haven't yet done a separate warm-up before your ride. Try and keep your heart rate stable and low up to this point to save yourself for the remainder of this long ascent. 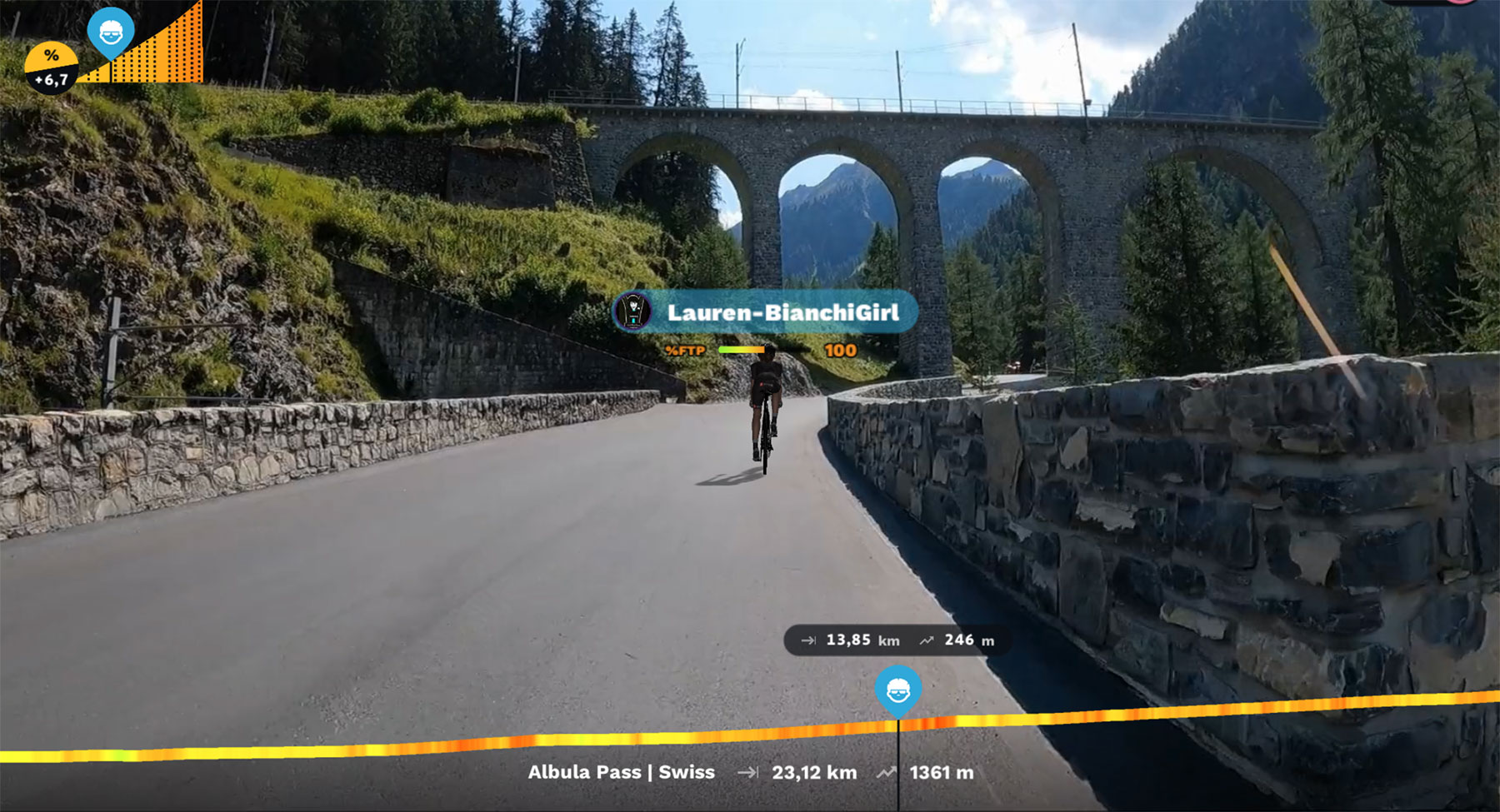 From the 8-10km mark, there is a flat section where you can try to keep a tempo pacing. Try to keep your speed up and legs spinning at a moderate pace on this 2km stretch because from 10km, where the Rhaetian Railway comes into view, the climbs start to hurt, rarely dropping below 7,5% and where you'll have barely any recovery places to allow your heart rate to drop. Keep your cadence high throughout the steep parts of the climb, pedalling between 85 and 95 rpm to spare your muscles and only fire up the afterburners if you have anything left in the tank in the last 3km.

Enjoy this fantastic climb and the many exciting aspects that it offers you along the way. 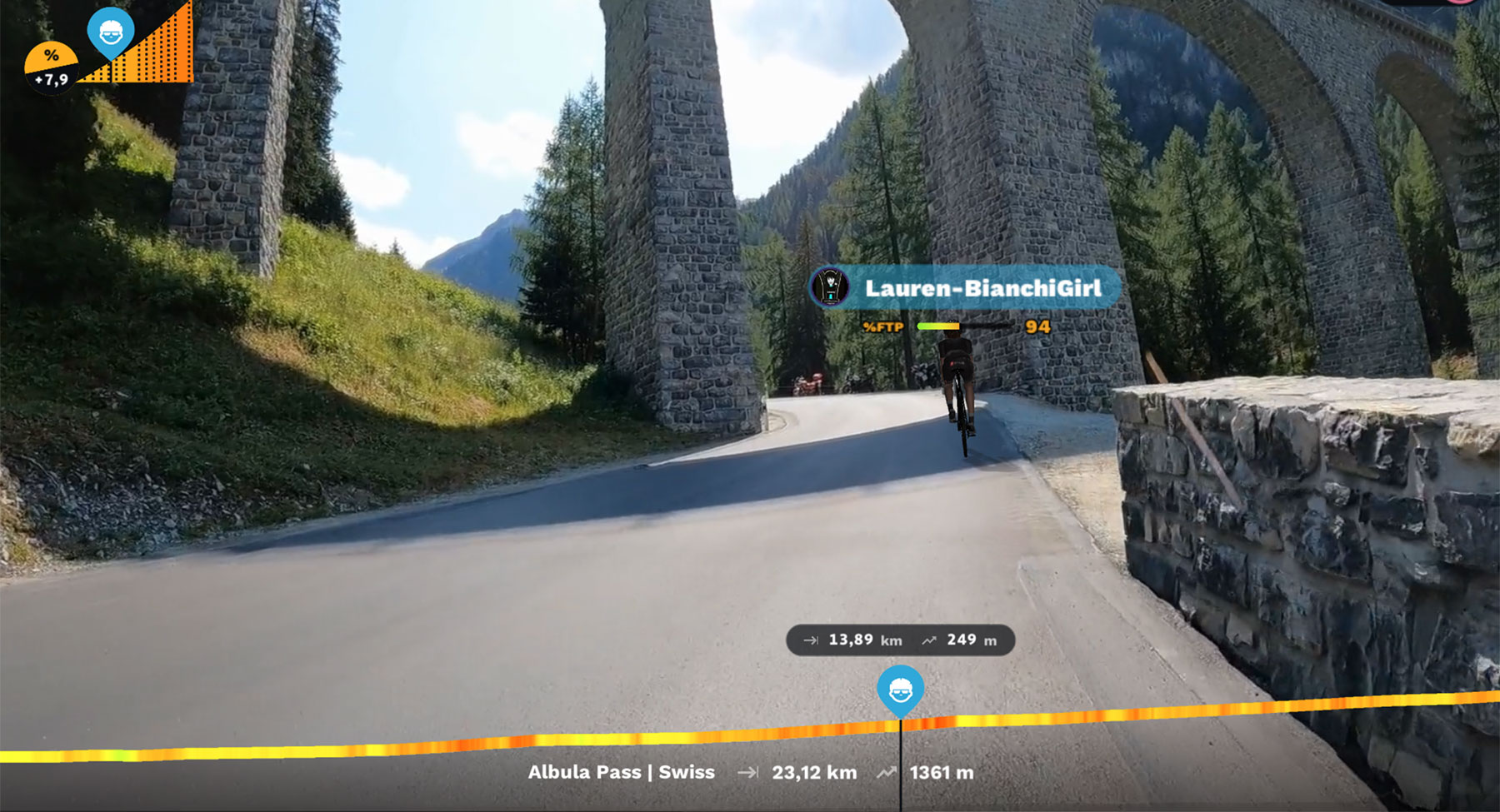 Join the virtual Tour de Suisse on ROUVY between the 13th and the 18th of June 2022 and experience other magnificent routes.