In early April every year, the iconic race held in Belgium known as the Tour of Flanders is also known as Ronde van Vlaanderen, De Ronde or Vlanderens Mooiste in Dutch. It is a UCI World Tour, a one-day classic and one of the five famous monuments in cycling races, and one of the two cobbled classics, the other being Paris-Roubaix held one week after.

The men race approximately 270km on a gruelling route that starts in Antwerp, and the women's, a shorter but no less demanding race on the same day. In 2022 one can expect to see the iconic climbs over the Koppenberg and the Oude Kwaremont-Paterberg before the finish in Oudenaarde. The race's inaugural edition took place in 1913 to reinvigorate cycling in Belgium and provide the Flemish people with an event held entirely within Flanders. The Tour of Flanders was interrupted by WWI. Still, when it later returned, its popularity exploded with the distance and cobbled roads combined to give the pro riders a very difficult challenge to conquer in the Flemish Ardennes! 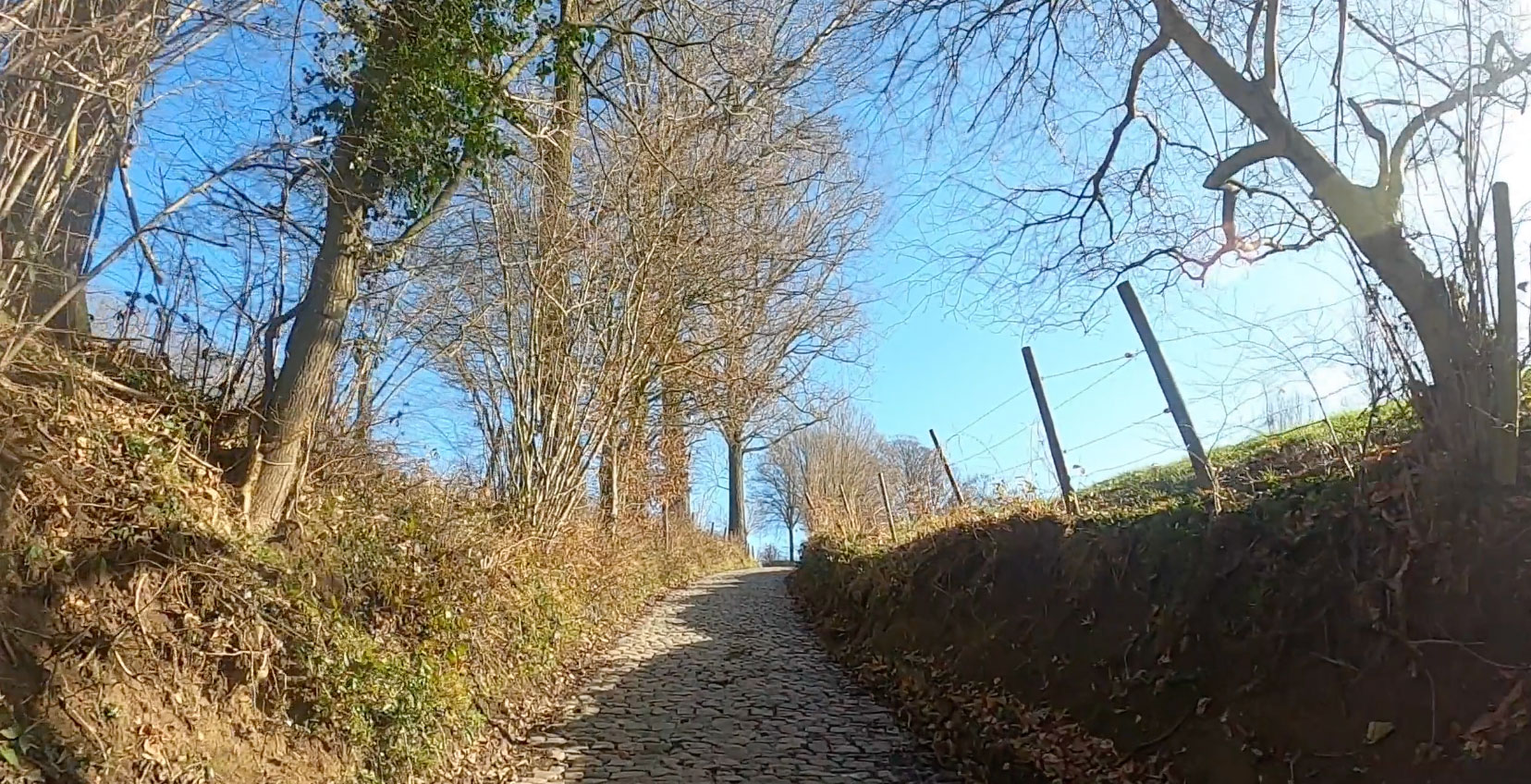 The race formats in history

The Ronde as it is lovingly referred to was created in 1913 by Karel van Wijnendaele, a local sports paper publisher. Naturally the race has evolved over the last century, with many route changes and growing exponentially in popularity. It has often been won by homegrown heroes such as one of the best professional cyclists ever, Eddy Merckx who won the 1969 and 1975 Ronde. Today, the Ronde continues as the symbol of Flemish pride because cycling can almost be identified as its national sport. 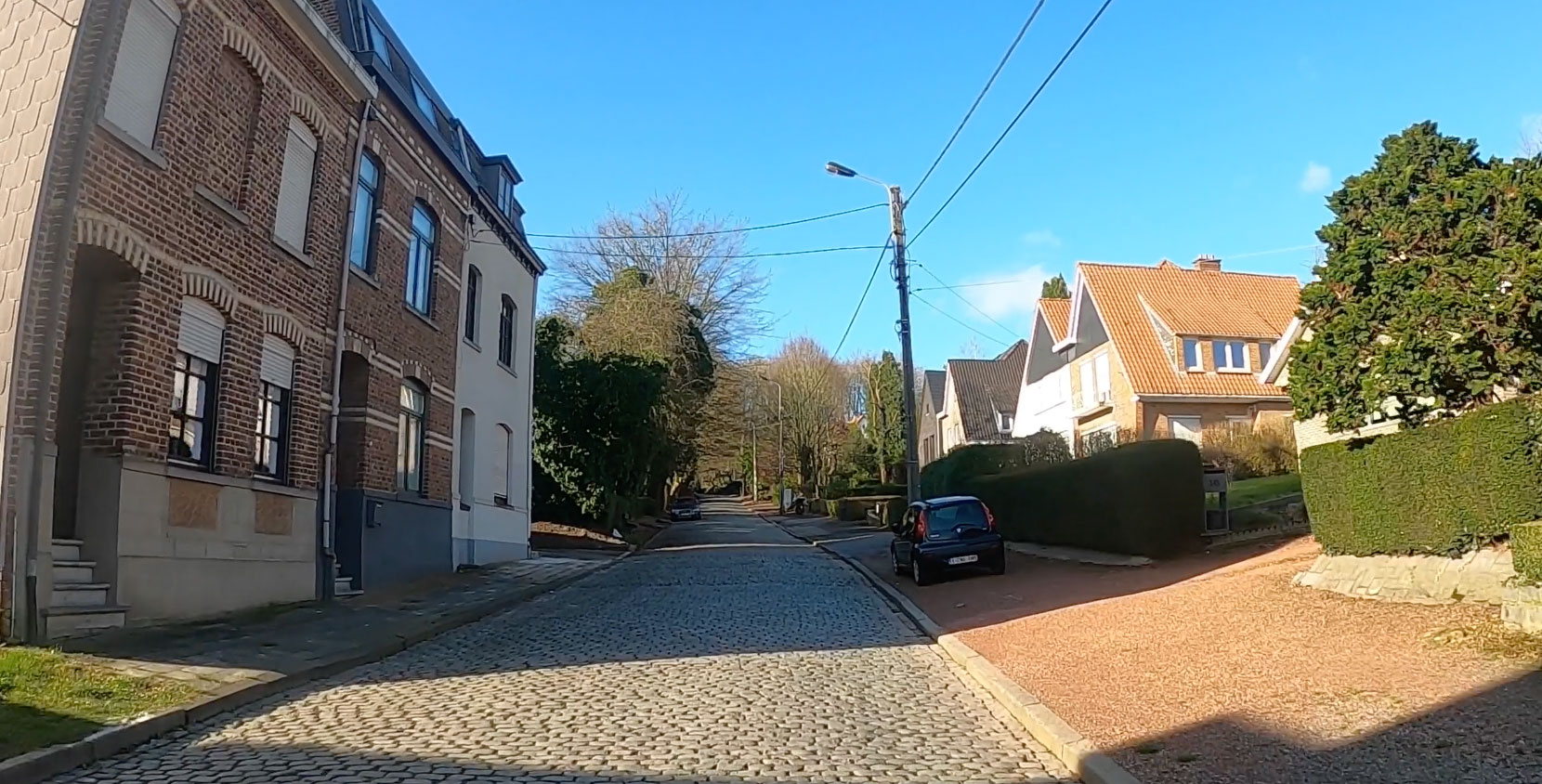 In 1973, the organizers moved the finish to Meerbeke with the finale, including the most iconic Muur van Geraardsbergen, or Kapelmuur named after the small chapel at its summit and an important landmark in Belgian cycling. They added the ultra-steep, cobbled Koppenberg as a focal point of the race to top it all. This change marked a turning point in its editions' history. 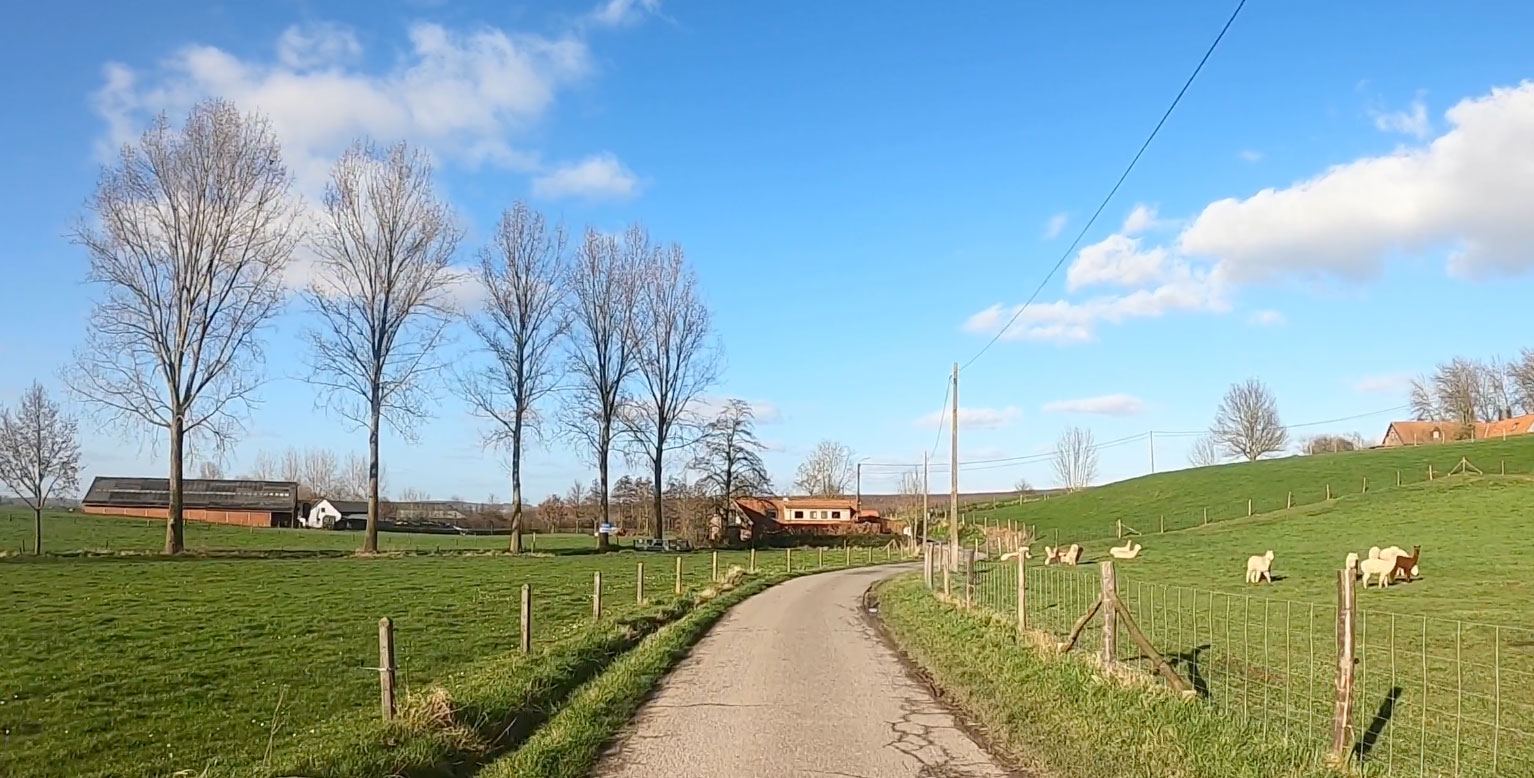 The edition in 1985 was unprecedented when only 24 out of 124 riders managed to finish due to a severe storm that obliterated the peloton. 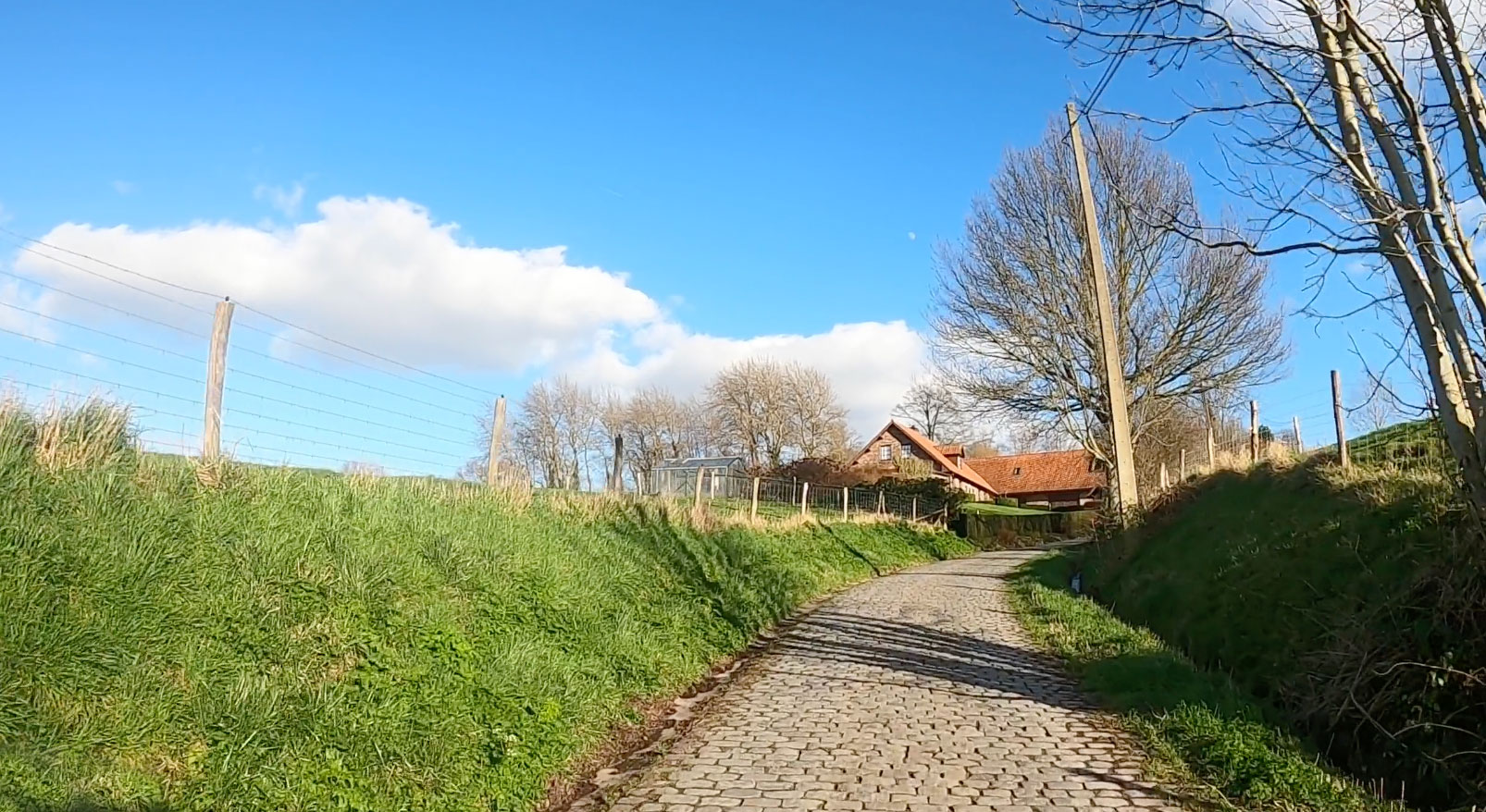 In 2012 they again changed the route plan to create a more spectator-friendly circuit around a finish in Oudenaarde that placed the essential focuses on the Oude Kwaremont and Paterberg cobbled climbs.

In 2020, the race was postponed to later in the year because of the pandemic and shortened to 243km. Mathieu van der Poel (Alpecin-Fenix) was victorious after beating his rival Wout van Aert (Jumbo-Visma) to the line.

The race returned in April of 2021 and was 254km in length, where Kasper Asgreen beat van der Poel at the line in a thrilling sprint finish to win in 2021. 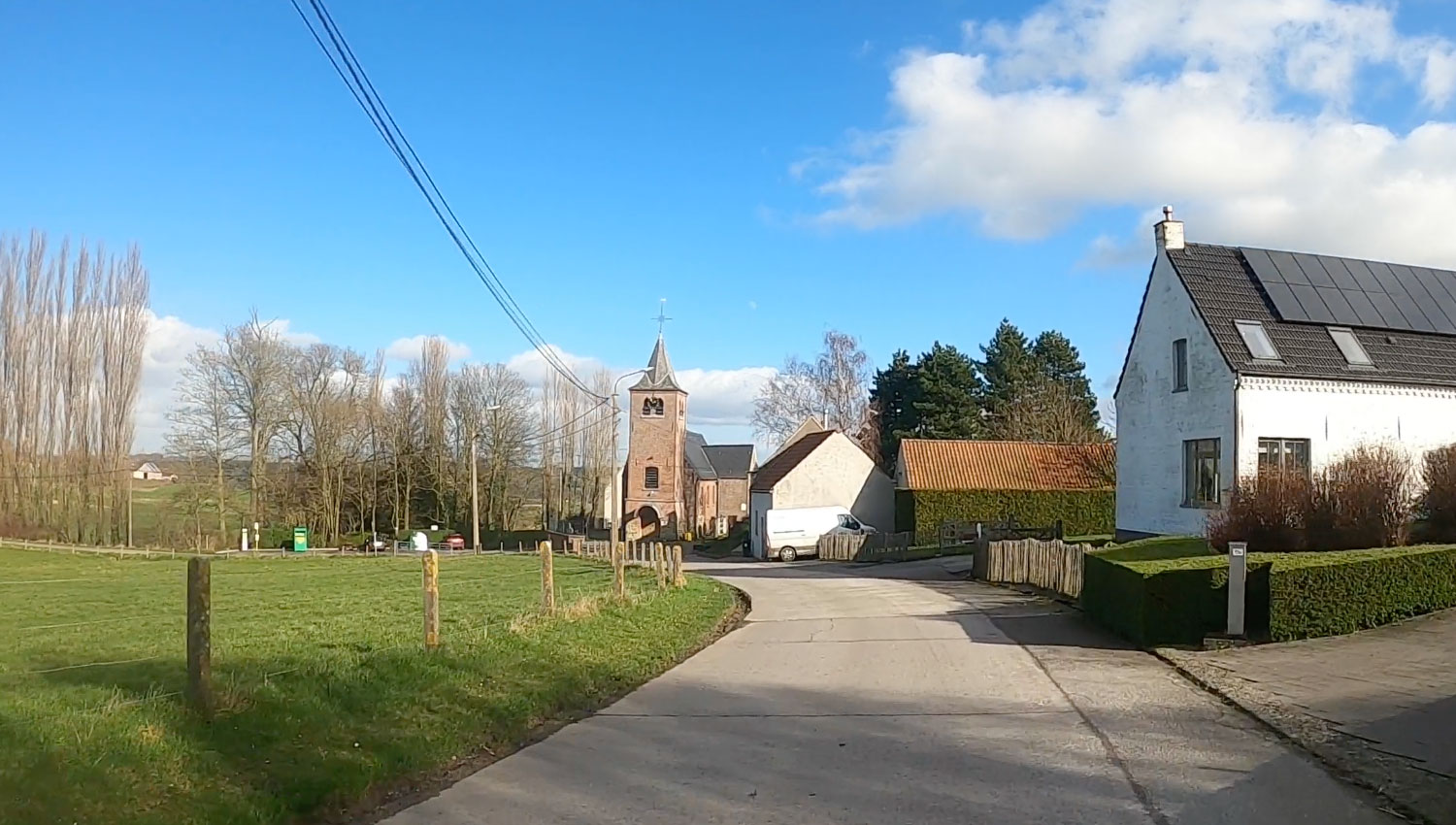 The Tour of Flanders is a national holiday where Belgians, particularly Flanders, go out and celebrate in large crowds gathering along the course at strategic points and fully supporting their national sport in a big way. The festive atmosphere around this most prestigious race on the professional calendar, where one out of every nine Flandrians will be out spectating, starts warming up the day before when the hordes of amateur cyclists get a feel for the cobbles in their very own Flanders sportive event.

On the actual day, national pride is glorious in the colours of black, yellow and red flags dotted amongst the crowds. Here is a great place where one can share in the tradition and celebration and get a good taste of the 'frieten' and 'bier.' Racing at their limits, one can hear the crowds shouting in support of the riders fighting the cobbles, riding side by side crammed like packed sardines in the bunch up the steep and narrow climbs. The scene completes the beautiful atmosphere and celebration of this monument classic. 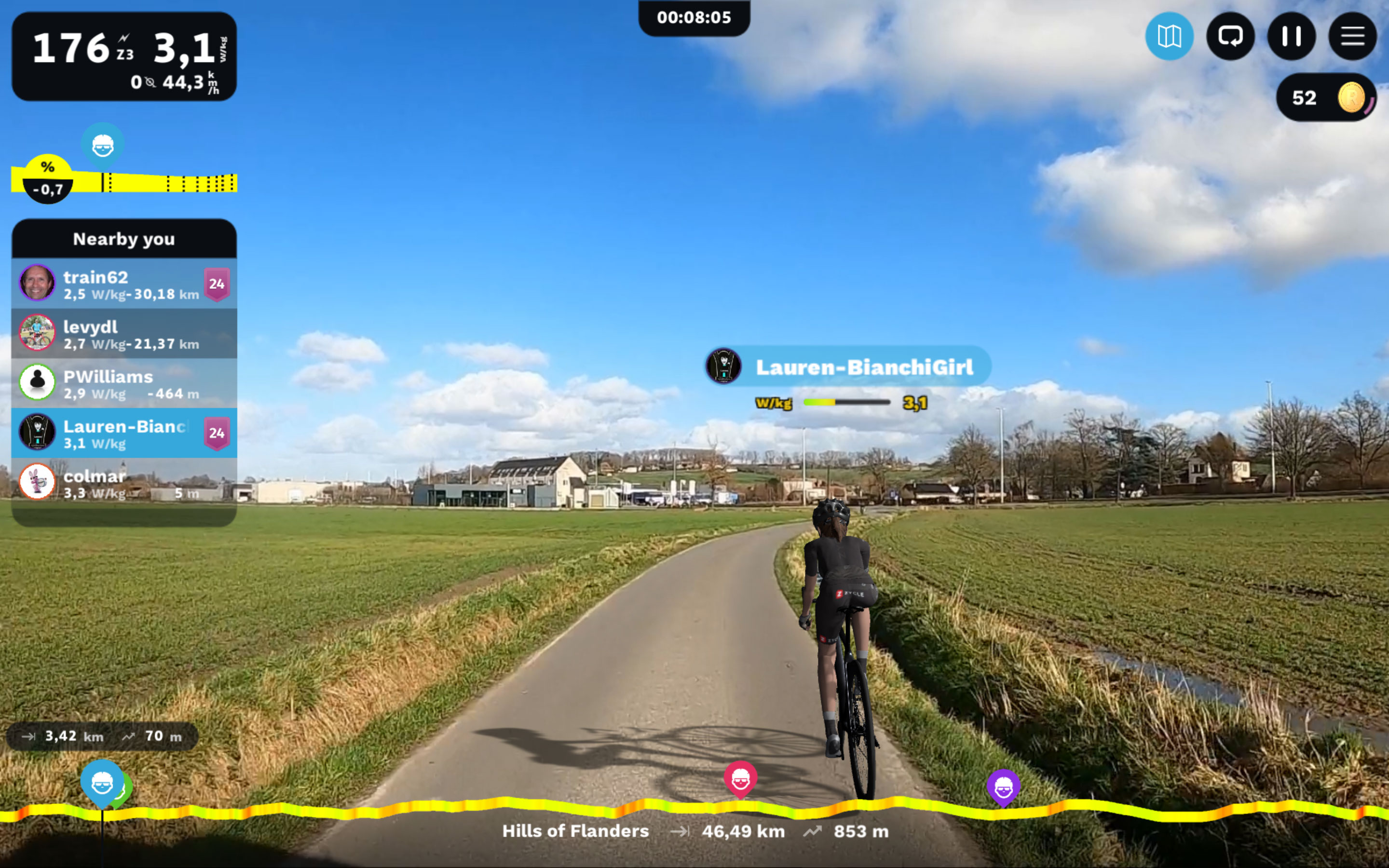 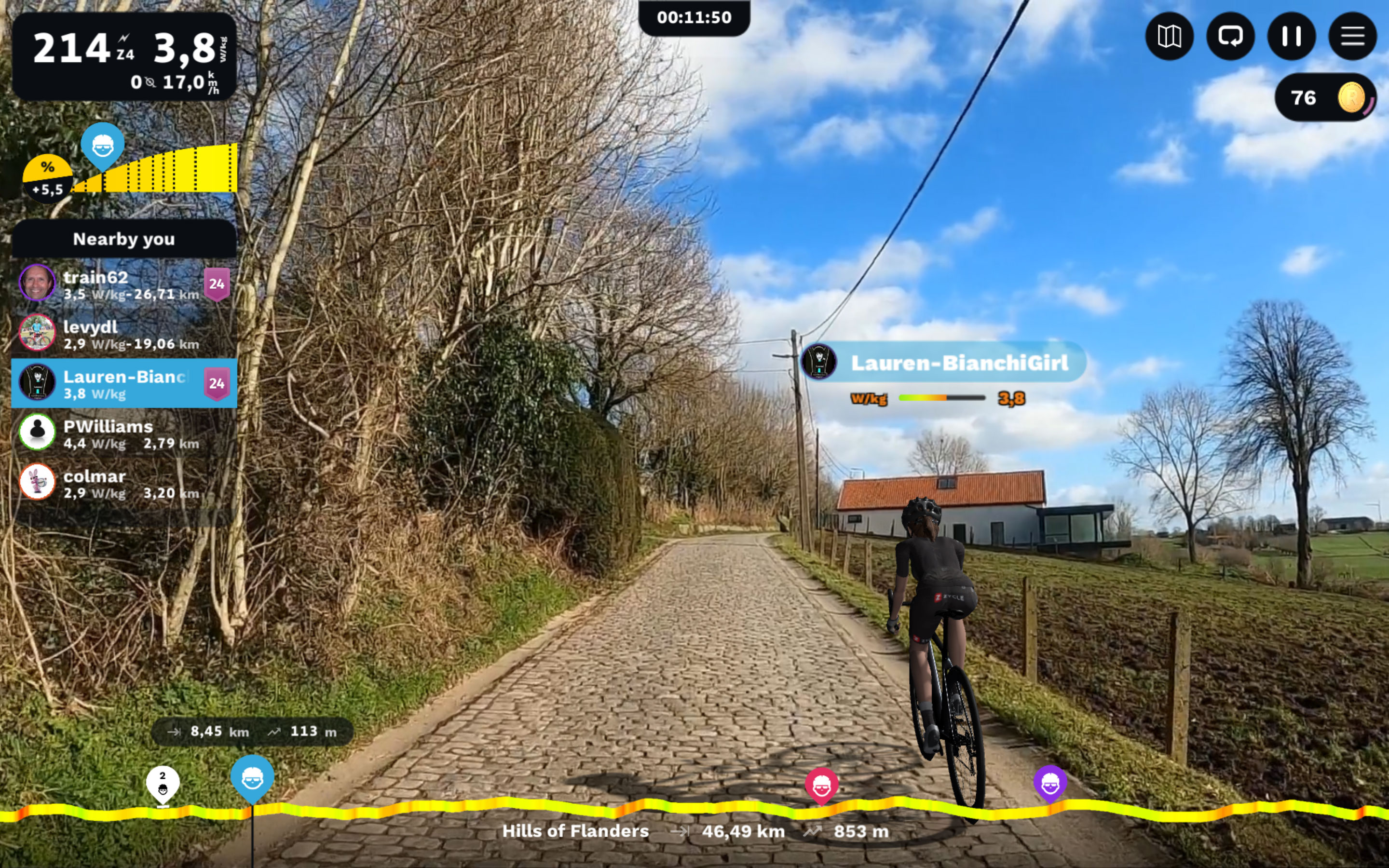 Characteristics of the main climbs

Koppenberg - Probably the hardest of all! It is 600m long with a gradient averaging 10% and with a maximum gradient of 22%

Muur van Geraadsbergen is the Tour's centrepiece with legendary battles conquering this eventually very narrow and steep climb known as Kapelmuur, Muur-Kapelmuur or the Muur. It is usually the 8th climb on the route and approximately 95km from the finish. The road starts wide and then narrows to the width of a car. The central part of the climb is 75m long, an average of 9% to a maximum of 20%, eventually decreasing slightly to reach the most famous location in cycling, the Kapel or Chapel.

Here is the STRAVA KOM

Here is the Koppenberg STRAVA KOM

Watch GCN's take on a few of the famous cobbled climbs and their experience: HERE

My personal experience of the cobbles on the route and climbs 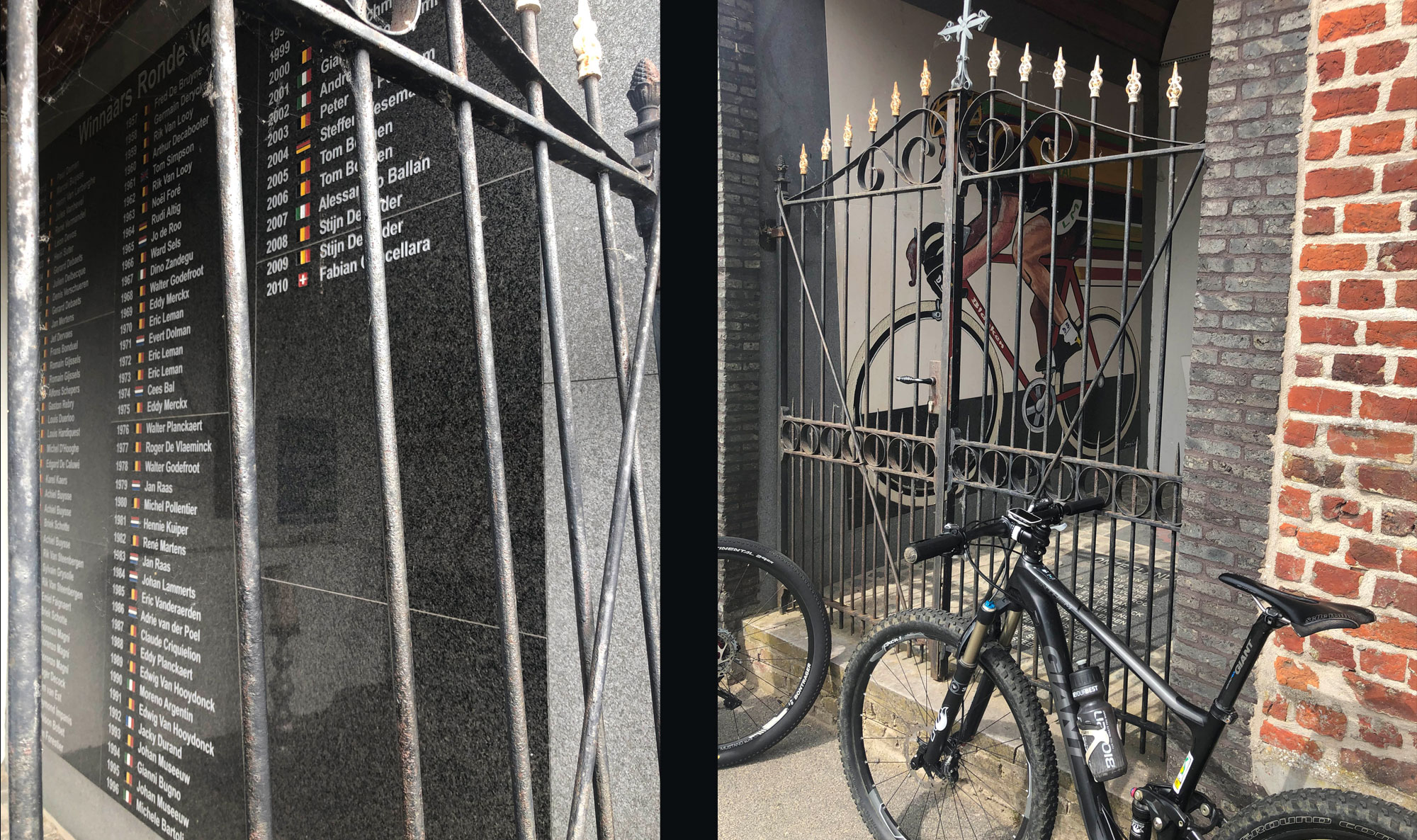 Above: Tributes to the legends and heroes of the cobbled Classics set in marble.

A few years back, I rode 112km of this route with some friends where I got to experience what the cobbles felt like beneath my wheels and just how brutal, jarring and challenging it is getting over this uneven terrain, and I was on a mountain bike with thick tires and suspension! I tried to imagine how it would feel to ride these old roads on a road bike and how difficult it would have been not getting the narrow tires stuck in some grooves or slipping on the uneven surfaces, and fover a distance of 270km. 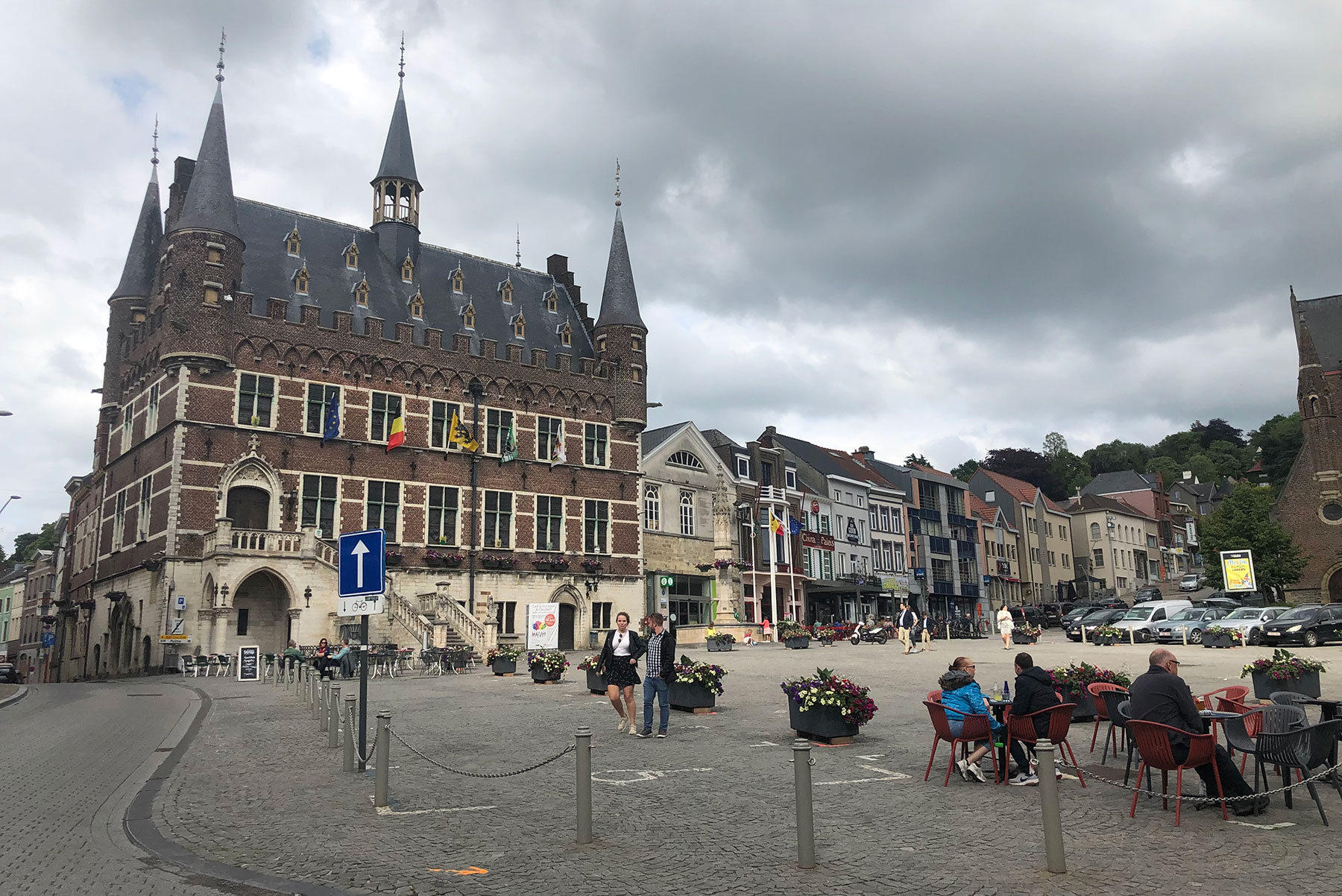 See my Strava ride on the Tour of Flanders route tells a long story in some memorable photos of these legendary climbs with all the many segments all sewn together! 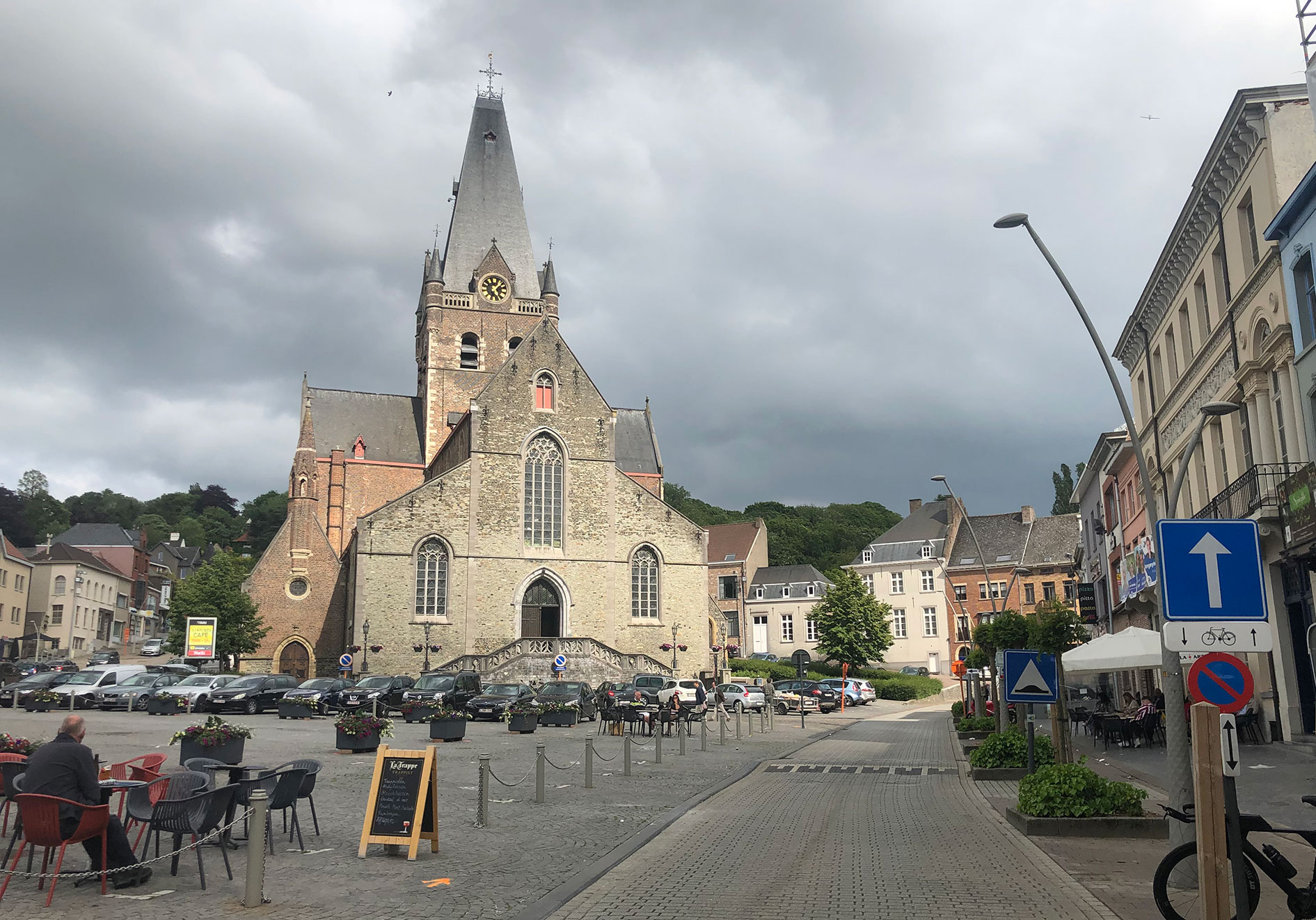 Above: Start of the Kapelmuur in Geraardsbergen. 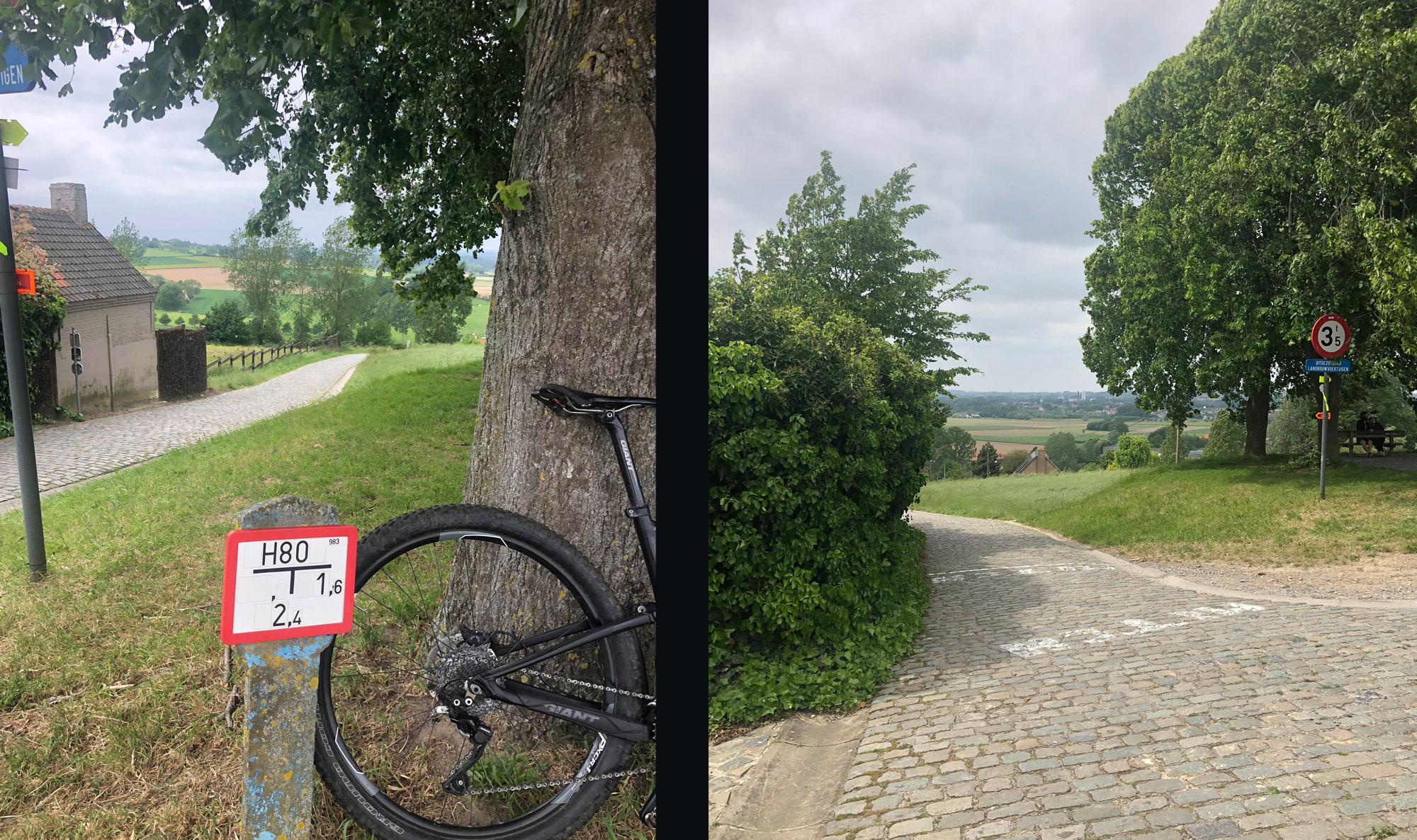 Above: the top of the Paterberg climb

The route has a series of short, steep climbs, starting with the Koppenberg and ending on the Paterberg. These range between 1,5km to 4km long with steep gradients.

The best way to handle this type of route is to make it a high-intensity hill climbing session in either a training ride or a race. After a good warmup and fresh legs, push the uphills and recover on the downhills, keeping things steady on the flats. You may want to approach the first half or third of the route a bit steadier than the last part as it's over a fair distance of 46,5km. Enjoy the experience, which brings you as close as you can get to the virtual route on this classic route with its famous climbs.