Gran Sasso, meaning Big Rock is a mountain chain consisting of a dying glacier which formed a massif of dolomite and limestone in the Apennine range in central-east Italy. Standing like a titanic grey sentinel at 2,900m, Corno Grande is the highest peak in the Apennines and the second highest mountain range after the Alps. We will be making our way up to this grand summit at the end of this journey.

In the Giro d'Italia of 1999, Marco Pantani left his rivals behind in a legendary breakaway on the misty and snowy slopes of Gran Sasso to take over the lead and win the stage. The temperature had suddenly dropped to 3 degrees Celsius, showing images of banked snow on the upper slopes in low visibility as the riders made their way, battling each other through the clouds. After winning the stage, Pantani declared: "I am not at my best yet." The 1998 Giro winner went away with little more than a kilometer remaining in the 253km eighth stage from Pescara. Watch the action unfold HERE.

The magnificent landscape we will explore today is remote and rugged, especially on the upper slopes, giving the landscape a vast lunar-type atmosphere on its higher slopes. Thanks to its high altitude and dry and remote environment, the locals know the area as Little Tibet. Sasso, situated in the Gran Sasso and Monti Della Laga National Park, is a magical place for hikers, skiers and cyclists in all seasons.

The stunning panoramas are raw, harsh and at times wild. This area of Abruzzo towers majestically skywards, and in optimal conditions, one can see the Adriatic and Tyrrhenian seas. The dolomite rock with smooth limestone walls or barren slopes displays the action of erosion by way of canals and scree debris.

From medieval towns to wild and remote Little Tibet

Our ride begins in the old narrow streets of L'Aquila's medieval piazzas, capital of the Abruzzo region, of ancient villages once ruled by the Medicis. Over a distance of 34km, you will ascend 1,100m with an average gradient of 3% to a maximum of 14% on the final climb to the summit.

The road winds along the foothills and surrounds itself by forests of beech, fir and chestnuts, a rustic blend of open fields, rust-colored patches of rock, stony meadows and wildflowers. From spring to autumn, one can spot flocks of sheep and herds of cattle grazing. Wild horses and wolves co-exist in this wild, remote and windswept landscape.

As we climb above the tree-line, the views of green mountain pastures spread out into the distance of this vast and open space contrasting starkly with grey colored rocky ravines chiseled deeply into the steep slopes of grey limestone-like folds of a heavy curtain.

The Gran Sasso ski resort lifts come into view as we finally approach the summit. Right next to the ski slopes, one can see the domes of the Laboratori Nazionali del Gran Sasso observatory. Here, International scientists research neutrinos, high-energy cosmic rays, dark matter and nuclear science and the movement of fast-moving asteroids and comets.

The first 7km is just climbing, but it's not that steep, followed by a gentle descent of 3km. Use this section for your warmup and pace yourself conservatively because it is far from over, and the hard part starts only after 28km. Pace yourself over this section with its flat and undulations, and try not to burn too many matches because you'll need all your energy for the final climb of 6km to the summit! This was how I tackled the route during the race. The views are spectacular, and it would be well worth it to try and look around at this very varied and unique terrain of central-east Italy. 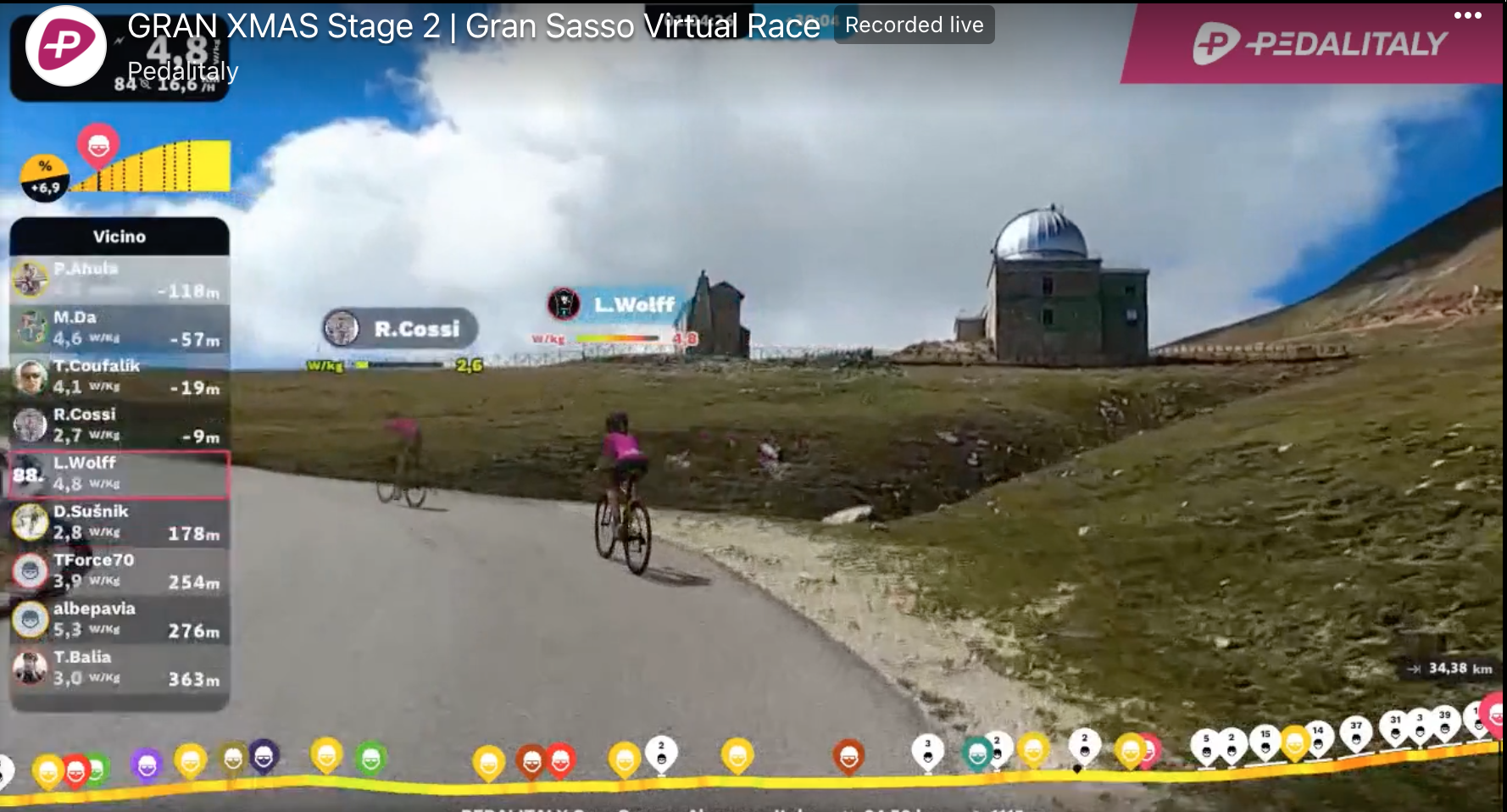 Here you can see me putting the hammer down in the last few meters, and about to take a step on the podium as I gear up and summit the climb at the Laboratori Nazionali del Gran Sasso and cross the finishline. Success, 3rd place! :-)