Prague, Czech Republic / February 11, 2021 - Czech Cycling Federation (CCF) presents ŠKODA eCUP 2021, a series of virtual cycling races on ROUVY open for anyone. The race series will end with the official first-in-the-history Czech National Championships in virtual cycling e-sports. The Czech National Championships in e-cycling will be held in person at a designated place and on the specific type of certified smart trainers. Based on the results of the final race, the championship jerseys will be awarded in “women”, “men” and “juniors” categories. Only Czech UCI-licensed nationals are eligible for the Championship qualification and finals. The first race takes off  today.

What seemed like a minor issue, a year ago, turned out to be a major pandemic  “covid period” that badly affected all of the everyday activities, within a very short period of time. And unfortunately, sports and related events were no exceptions here either.

One of the rapidly developing forms of sports activities is the virtual cycling race on online platforms, which is  open to cyclists of all ages and performance categories. This kind of e-sport, until recently was considered a relatively marginal and unattractive form of cycling. Today, however, spurred by the coronavirus related restrictions, the sport emerges as the avant-garde, both as a form of training preparation and also as a form of racing competition, often with a very prestigious list of prominent names.

The Czech Cycling Federation was quick to take to this trend last year, by including two virtual races in its spring lockdown calendar. These virtual races were not only attended by a wide range of cyclists starting from the ranks of high performing riders to the general public, but also included well-known Czech National representatives.

For this year, the Czech Cycling Federation has prepared a comprehensive series of virtual cycling races, “ŠKODA eCUP 2021”, which is the first Czech Cup in e-sports in the history of the Federation and will take place in February and March 2021 on the ROUVY platform. The series will end with the official Championships of the Czech Republic in e-cycling.

It is to be noted that it is not just a series for road cyclists but it is an event of the Czech Cycling Federation for cyclists of all disciplines. "I don't think that is the future of cycling as a whole, but one of the possible directions in today's digital age. That is another way of athletic activity with the possibility of engagement of the active athletic community. That's why we made this series of virtual bike races in cooperation with partners Škoda Auto and Strabag”, said CCF President Petr Marek.

The calendar and individual tracks have already been set and the commentary of the races will be provided by the editor of the Czech Television, Tomáš Jílek. Tracks for the 4 stage series have been considered and selected based on their course profile and attractiveness by Tomáš Konečný, coach of the National Team.

"From the point of view of a competitive racer, I consider it as an advantage. We have hosted virtual races last year and it's not bad, even the first virtual UCI World Championships took place in 2020. The next undisputed advantage is the fact that in practice almost anyone can participate. The races are taking place on real routes, and it sounds quite fun to be able to ride Tourmalet, Stelvio, or take on the stages of Vuelta and Tour", said Tomáš Konečný.

The first race of the ŠKODA eCUP 2021 series takes place in Tuscany and the track is generally plain, with a total elevation of 200 meters and a length of 27 kilometers. The second race is relocating to Šumava and the track is more demanding than in the opening event. There are six kilometers of long climbing with a total length of 35 kilometers. The third race moves to France with a tour to the famous Tourmalet and therefore this race especially suits climbers (this route often is featured on the stages of Le Tour and Vuelta).

The final race of ŠKODA eCUP 2021 will be on the 30km route of Říčany-Brno-Říčany and it will take place in the actual presence of the best riders from the opening stages. At the same time, this event will also have an official status and be the first e-championship of the Czech Republic. 20 cyclists with the best results on the leaderboard at the previous eCup stages will ride in-person at the designated place and on the same type of certified smart trainers. Based on the results of the final race, the championship jerseys will be awarded in “women”, “men” and “juniors” categories. Only Czech UCI-licensed nationals are eligible for the Championship qualification and finals.

It is not to be missed that the final stage invites other riders worldwide to participate too. International riders will be eligible to participate online from home alongside the Championship contenders. The instructions and qualification details for the ŠKODA eCUP - Czech Virtual Championship is still being fine-tuned and will be announced in time.

Prizes: A total prize money equivalent to 1,400 EURO for the podium places - 350 EURO per race (9,000 Czech crowns) in the series. Details of allocation are here.

Parcours and dates of ŠKODA eCUP 2021

March 25th: ŠKODA e-MČR 2021 | Brno, register here  (the route is under process and will be published shortly.) 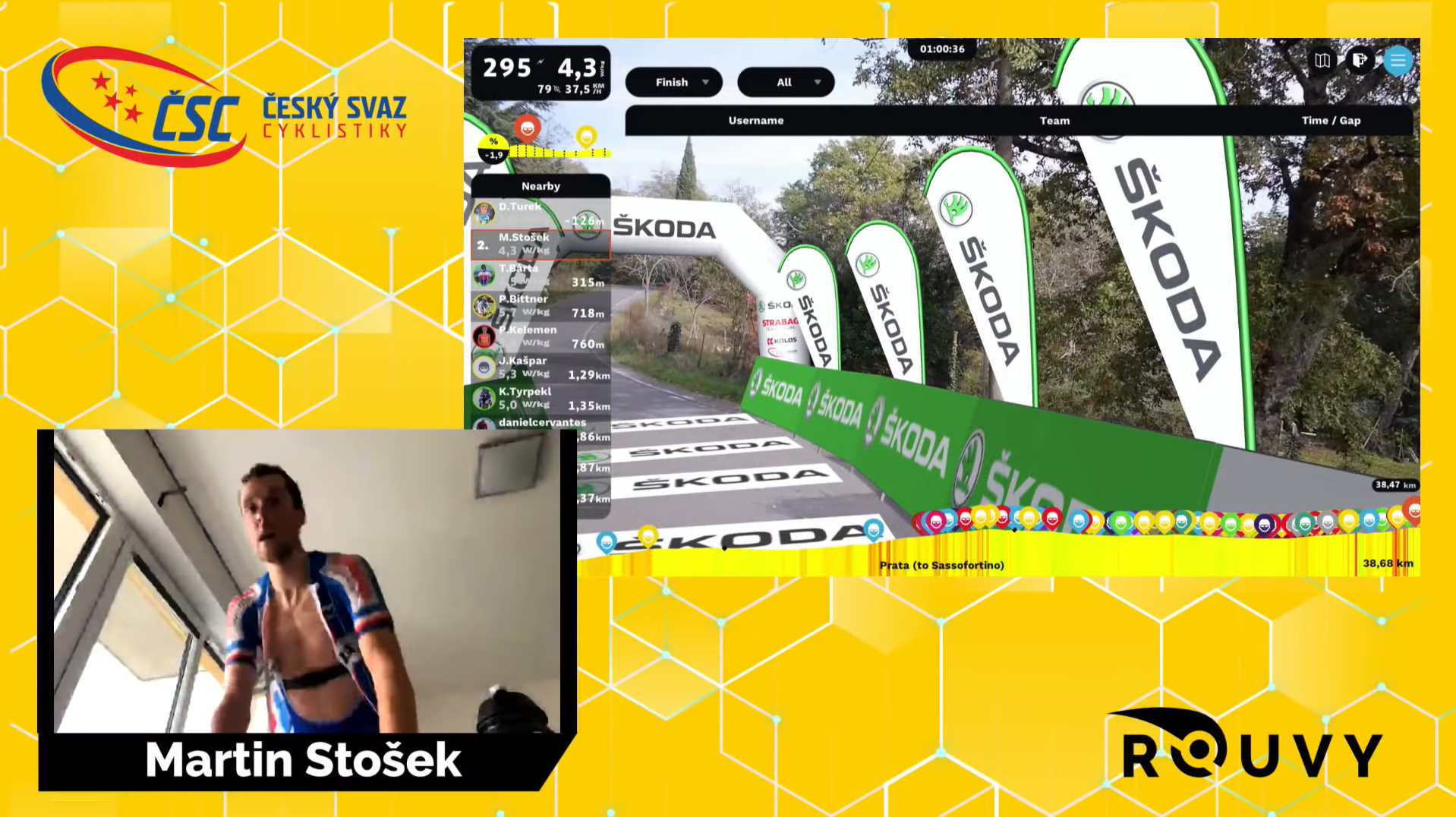 ROUVY is a digital racing platform for athletes all over the world to compete, ride with friends for fun, do workouts and much more. ROUVY offers thousands of virtual locations and training options, including the chance to take part in races and cycle through the entire route catalog. Thanks to simulated but fully realistic efforts, ROUVY is the best option for the most ambitious and toughest athletes to prepare for the next race day. www.rouvy.com.