The situation around the coronavirus pandemic this spring called for a new approach to cycle racing, for professional teams and the many fans around the world. A platform was required to deliver a professional sporting event, while at the same time complying with the epidemic regulations of all countries. Based on a close and intensive collaboration, the Tour de Suisse, ROUVY, Velon and Swiss Television were able to implement the racing series "The Digital Swiss 5" within a few weeks.

During the five digital races, the cycling pros were connected through their racing bikes by smart roller trainers directly to the ROUVY app and fought until exhaustion for the stage wins. The victories of Stefan Küng in his home race around Frauenfeld and the nerve-racking duel with Michael Matthews will go down in history as highlights. Besides Küng, illustrious names such as Rohan Dennis and Nicolas Roche entered the winners' lists.

This world premiere was able to benefit from very wide media coverage and received corresponding public attention. Public perception was also made possible by a novel and extensive TV production by SRF sport. The result: five races, five victories and five days of cycling racing at the highest level.

"The Digital Swiss 5 was a venture with many unknowns for all partners involved. Under the motto 'special circumstances require special measures' we seized the opportunity to launch a new, innovative form of cycle racing and are proud of the successful result", says Joko Vogel, Co-CEO Cycling Unlimited AG.

Petr Samek, CEO ROUVY: "I am delighted about receiving the Digital Communication Award. The technical implementation was a huge challenge, but it was worth it and we are happy about the recognition we have now received".

The courage to take a chance and invest extensive resources in a new format was rewarded at this year's Digital Communication Awards 2020 (category COVID-19: Events & Online Broadcasts) presented by Quadriga University. The Digital Swiss 5 was chosen as the winner by a top-class jury consisting of representatives of renowned international companies from a wide range of business sectors. "Winning this trophy fills us with pride and motivates us to continue to promote and develop cycling in the future through new ideas and innovations," promises Joko Vogel, Co-CEO Cycling Unlimited AG. 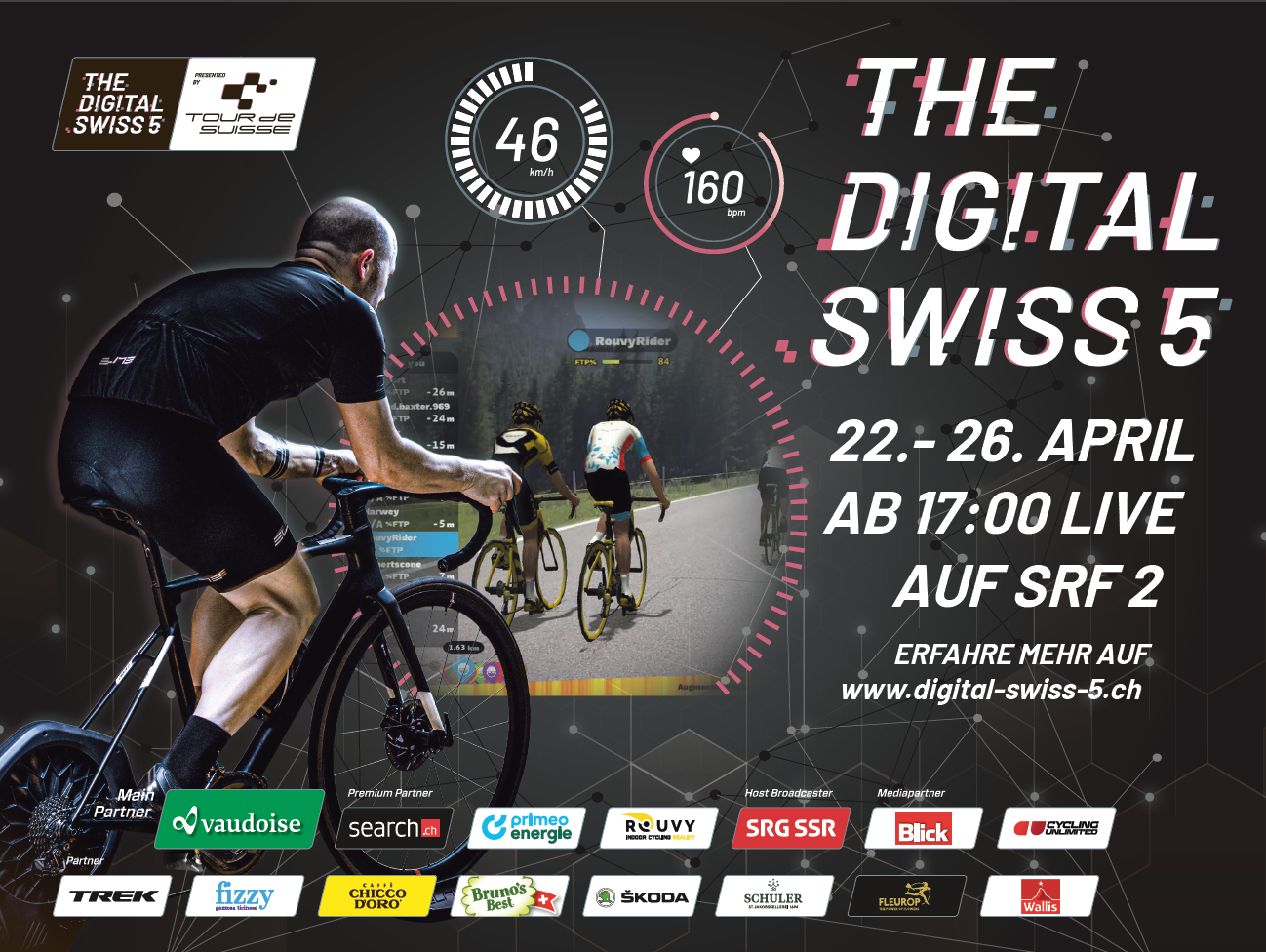 About Cycling Unlimited:
Combining forces in Swiss cycling. Infront Sports & Media AG, Swiss Cycling, TORTOUR GmbH and ProTouchGlobal GmbH own Cycling Unlimited AG - a comprehensive platform for cycling enthusiasts. Based on the extensive expertise of the partners, cycling will be further developed at all levels. Cycling Unlimited AG is responsible for the implementation of well-known, national professional and amateur cycling events from 2020. These include the Tour de Suisse, the Tour de Suisse Challenge, TORTOUR Ultracycling and TORTOUR Gravel as well as the Swiss Cycling Alpenbrevet. The main focus of Cycling Unlimited AG is to build a far-reaching community and communication platform for all those who associate with cycling. www.cycling-unlimited.ch

About ROUVY
ROUVY is a digital racing platform for athletes all over the world to compete, ride with friends, complete workouts, and much more. ROUVY offers thousands of exciting virtual roads and workout options including the ability to race and ride through the entire route catalogue. With fully simulated and realistic efforts ROUVY is the best option for the most demanding athletes to reconnaissance their next race location virtually and be race-day ready. www.rouvy.com