The first digital pro cycling races from 22 to 26 April are to be running daily at 5:00 pm CET. Fans are able to ride and compare to the pros on the same courses and dates at 7:00 pm CET.

Tour de Suisse, ROUVY and Velon launch the first digital races featuring the best pro cycling teams in the world this week. The Digital Swiss 5 starts this Wednesday and will be broadcast on TV and online daily at 5 pm worldwide.

The best teams in the world will compete against each other for five consecutive days on the ROUVY Indoor Cycling Reality platform. In the new racing format, The Digital Swiss 5, riders compete against each other every day on sections of some of the most beautiful Tour de Suisse stages, all in compliance with the current corona epidemic regulations. And for cycling fans at home and abroad, finally there will be a competitive cycling event to follow live.

19 teams (16 WorldTour and 3 wildcard teams including the Swiss National Team) line up for the world premiere in digital pro racing. The cycling pros are connected on their racing bikes by “smart” roller trainers. While the rider sees the track and his position in the race on the monitor in real time and as an actual video image in front of him, the smart trainer puts the respective resistance on the pedals - depending on the topography of the track.

"My first experiences of a virtual day race a few weeks ago made me realise: Virtual races are definitely not easy. The races are in fact shorter than normal races, but the intensity is much higher, and you have a much smaller time frame in which you can make a tactical difference. I'm glad that we can offer entertainment to the fans, even though we can't ride on the road. The cyclists are also very motivated, and the teams get a chance to represent their sponsors. We certainly have some tough races ahead of us next week, and I will give everything to be able to celebrate another virtual victory," assures Greg van Avermaet (Team CCC)

The start list for The Digital Swiss 5 reads like a who's who of the international cycling elite; 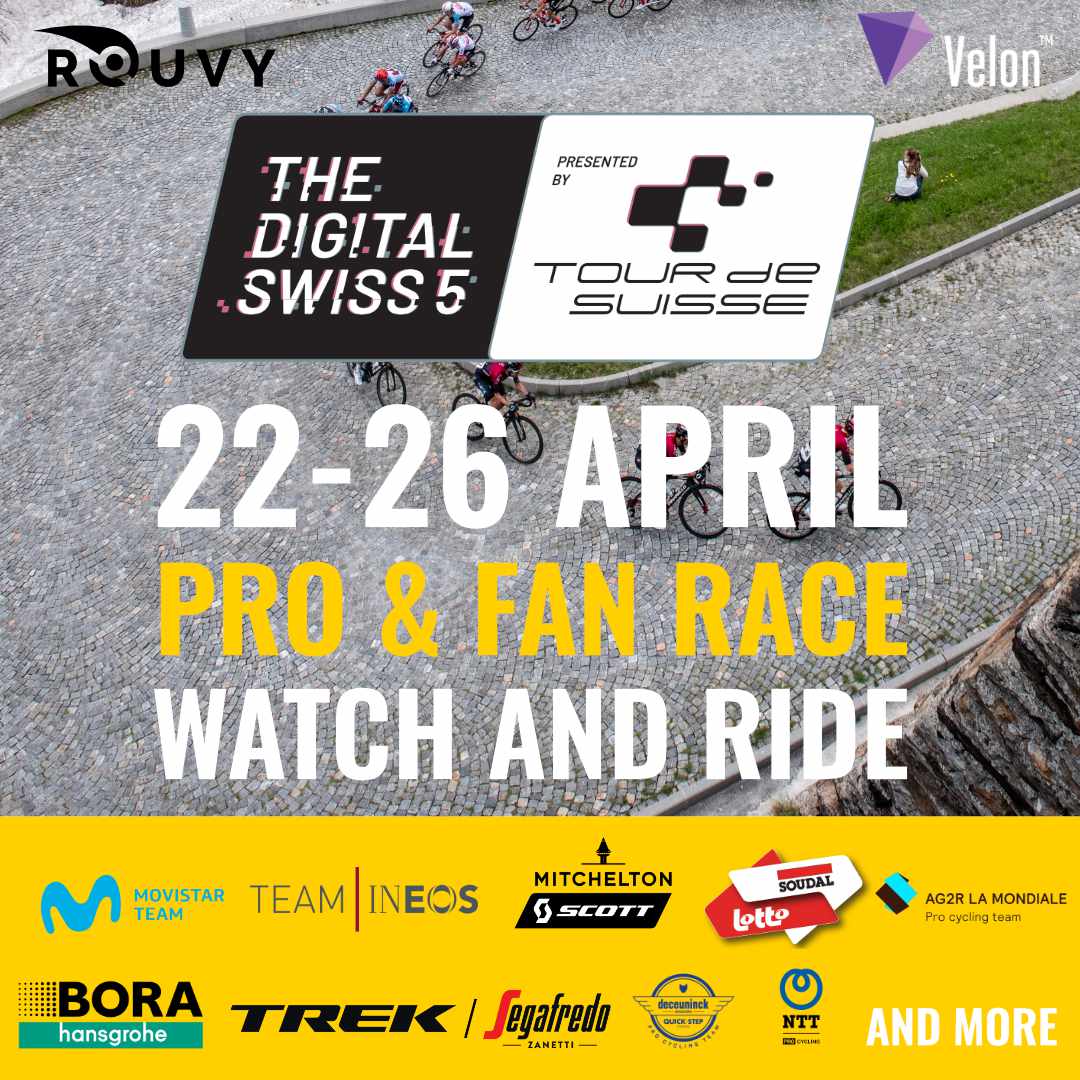 And Switzerland is also represented by very strong names;

The Swiss Cycling line-up also includes Nino Schurter, the record-holding mountain bike World Champion. Although a digital race will also be new territory for him - he is not completely unfamiliar with the Tour de Suisse, as he started at the TdS 2014.

The races will be held on sections of the Tour de Suisse 2021 route for approximately one hour daily from Wednesday 22 April until Sunday 26 April 2020.

Riding is done via detailed track simulations on ROUVY. In these video recordings of the actual courses, the individual cycling pros are shown as 3D avatar images in the look of their respective teams - true to their position in the current race. The digital race images are supplemented by live pictures of the pros at home during the TV broadcast. The Digital Swiss 5 races are also commented by experts and Velon provides performance data live from the living rooms of the riders.

Simultaneous start for all riders. Each day is an individual stand-alone single race without the overall individual or team standings for TDS 5. Drafting is not available.

TDS5 will be broadcast and commented live on TV and online with many exciting background reports for viewers at home in English, German, French and other languages of the respective broadcasting companies.

Fans who cannot follow the races live on TV can stay up to date by means of a live ticker on Search.ch, the official Tour de Suisse app. In addition, all those with a ROUVY AR subscription can follow the races via spectator mode, switching between the riders' positions.

PARTNERS OF THE PRO RACE

Despite social distancing, fans can get close to the pros. Every evening at 7 p.m., the international cycling community can compare themselves to the crème de la crème of cycling professionals on the same stage sections in the Fan Race. An innovation which, in the current situation, at least partially satisfies the need for cycling competitions. To expend the same effort as the pros for five days is certainly a new and unforgettable experience for anyone up for the challenge. 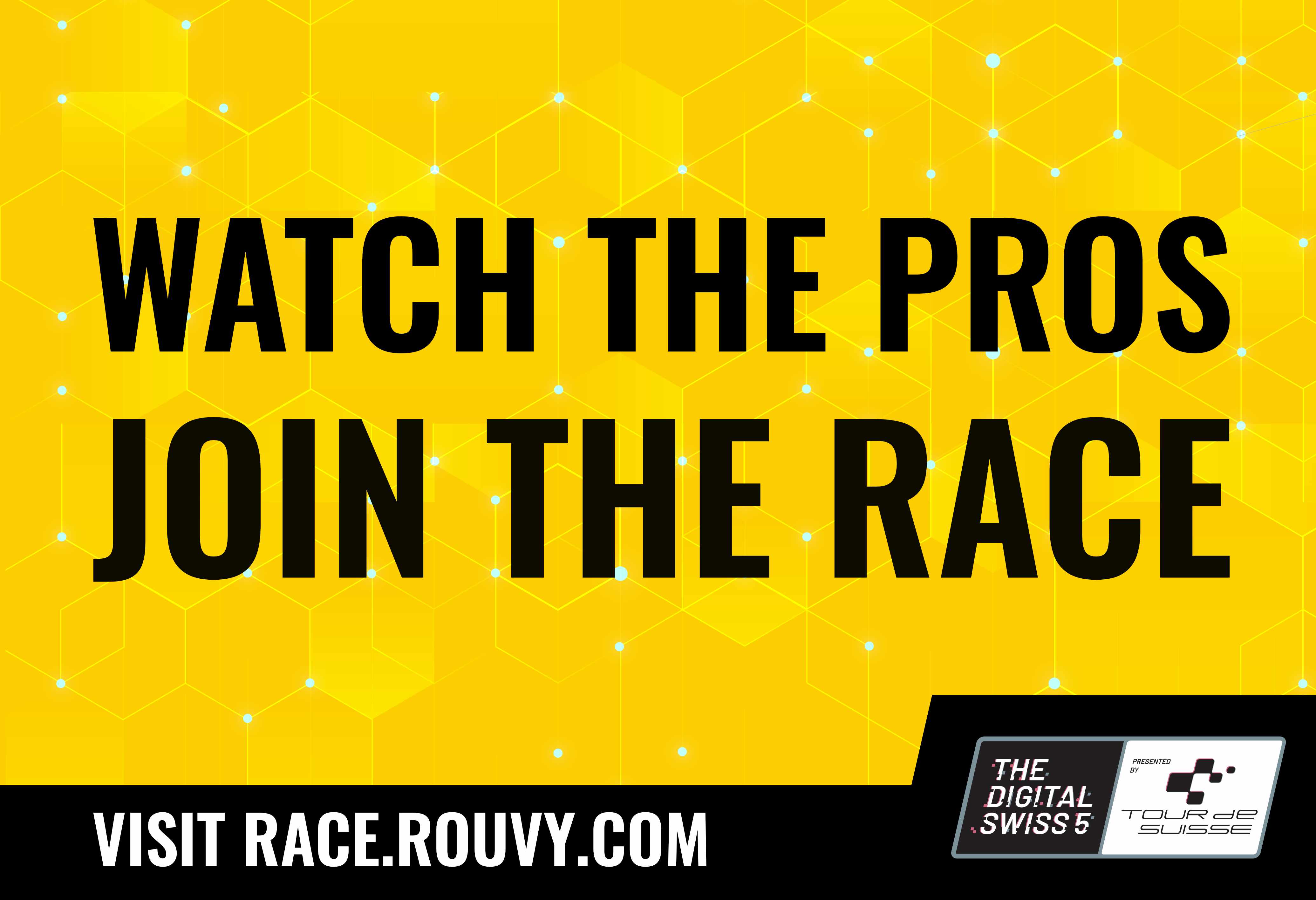 The same as for the pros.

The winners of the fan race will win the prizes from the partners.

PARTNERS OF THE FAN RACE

TDS5 Fan Race will be streamed live daily on the ROUVY’s youtube channel with an English commentary.

Further information about the pro race is available at https://www.digital-swiss-5.ch

Further information and registration for the fan race is available at https://www.race.rouvy.com/

For the real-time broadcasting on the pro-race updates and details follow https://www.velon.cc/

Joining forces in the Swiss cycling world. Infront Sports & Media AG, Swiss Cycling, TORTOUR GmbH und ProTouchGlobal GmbH are owners of Cycling Unlimited AG, an umbrella platform for biking enthusiasts. The partners bundle their extensive expertise in order to advance all levels of the sport. Well-known national cycling events for professionals and amateurs, including the Tour de Suisse, Tour de Suisse Challenge, TORTOUR Ultracycling and TORTOUR Gravel as well as the Swiss Cycling Alpenbrevet belong to the portfolio. The primary objective of Cycling Unlimited AG is to establish a complete community and communication platform for everyone who has made cycling a part of their life.

ROUVY is one of the most popular providers of indoor training software solutions in the global cycling community. ROUVY distinguishes itself from other providers thanks to 1:1 realistic representations of the track simulations. These are based on the combination of real video recordings of the routes with 3D animated riders and objects. Besides a variety of existing routes like the Furka Pass, the Stelvio or other cycling classics, ROUVY also offers a wide range of virtual events for the benefit of its user community. 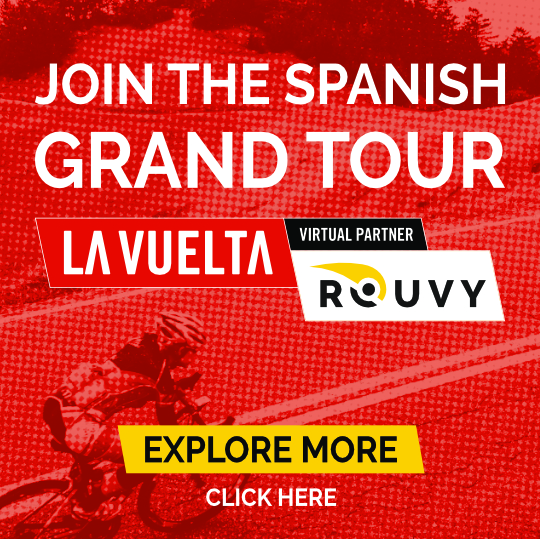