The colossal and monumental rocky granite plateau of the Sasso Pordoi towers to 2,239m, and with the Sella emerges head and shoulders above the grand Dolomites of northern Italy. It is the second-highest paved climb in the Dolomites and forms the background to legendary events in its history.

During WWI, the severe winter temperatures, the risk of avalanches and weather conditions put the soldiers' resistance to the test at these high altitudes. They built defensive trenches, posts, forts, barracks, and tunnels dug deep into the rock during the long years of war. Since those troubled times, other battles have played out since at the Giro d'Italia, where the great Fausto Coppi, a name synonymous with the Pordoi, is commemorated by a bronze monument that stands proud at the summit in honour of Il Campionissimo, 'The Champion of Champions.' 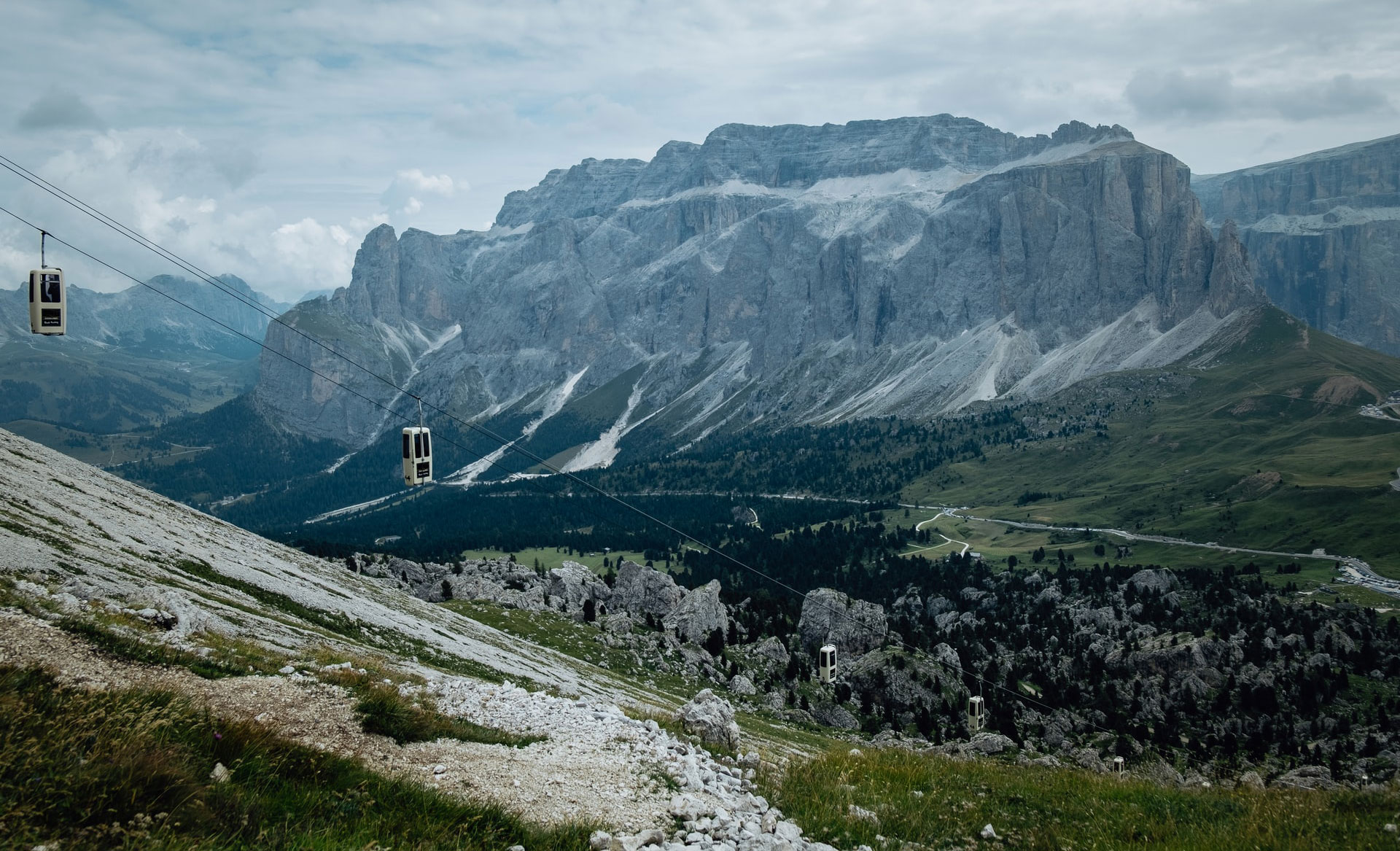 After the war, the first time Fausto Coppi, an all-rounder, tackled the Pordoi was in 1940. Coppi was good at climbing, time-trialing and sprinting. He was leading the Giro here for the first time. On a stage on this particular ascent, he was helped to the summit by his team-mate Gino Bartali after overcoming difficulties, and his win became the first of five victories at this Tour. He also raced to success on the climb five times. Since 1965, five years after his death, the Giro organizers have awarded a Cima Coppi prize to the first rider to reach the iconic summit of the highest peak of this tour every year. The first rider receives twice as many points here than on any of the other categorized mountains in the race. Coppi was once heard saying, 'It's like wrestling a gorilla. You don't quit when you're tired. You quit when the gorilla is tired', and he has also exclaimed, 'Age and treachery will overcome youth and skill.' Watch a moment back time HERE. 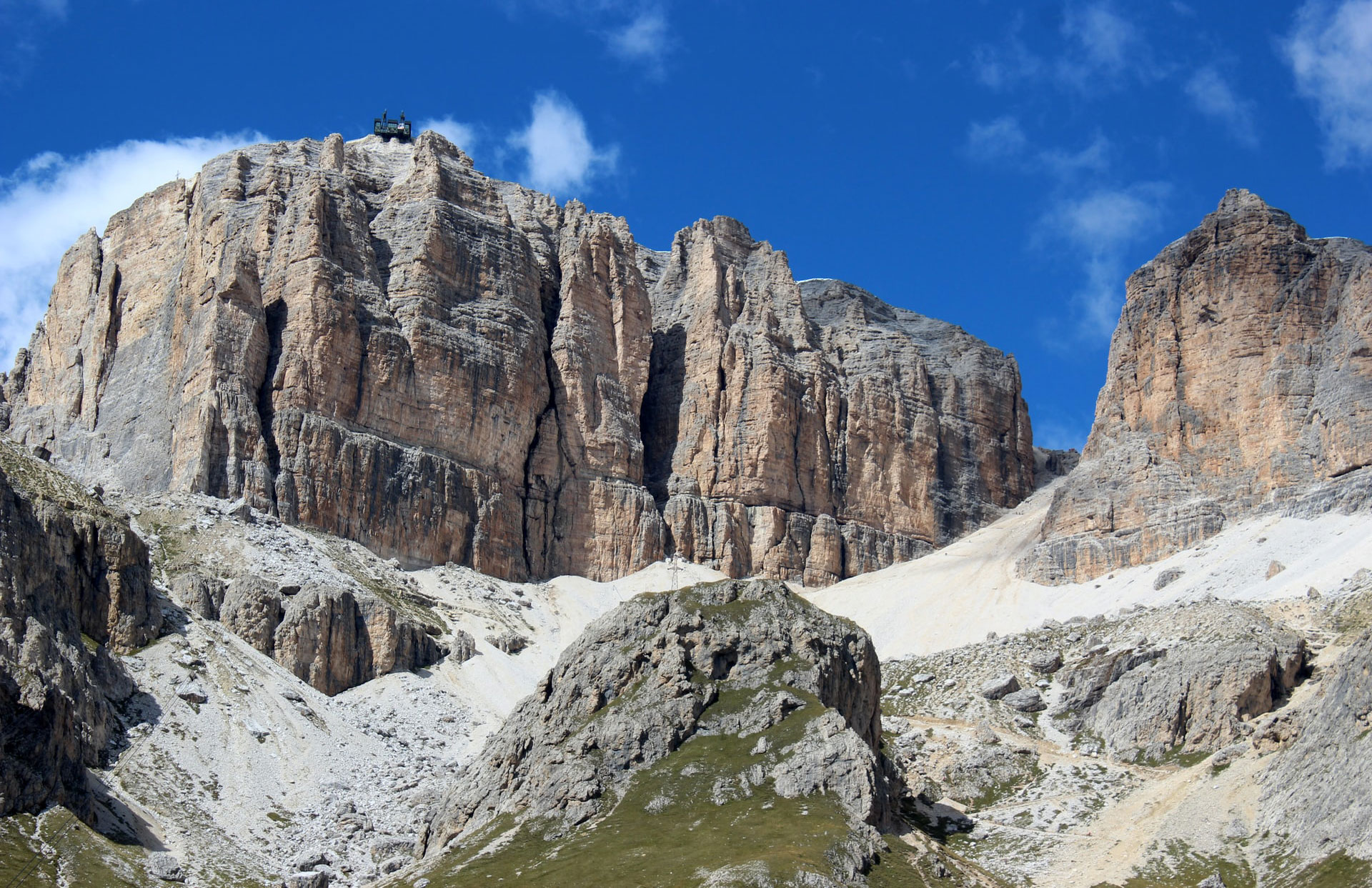 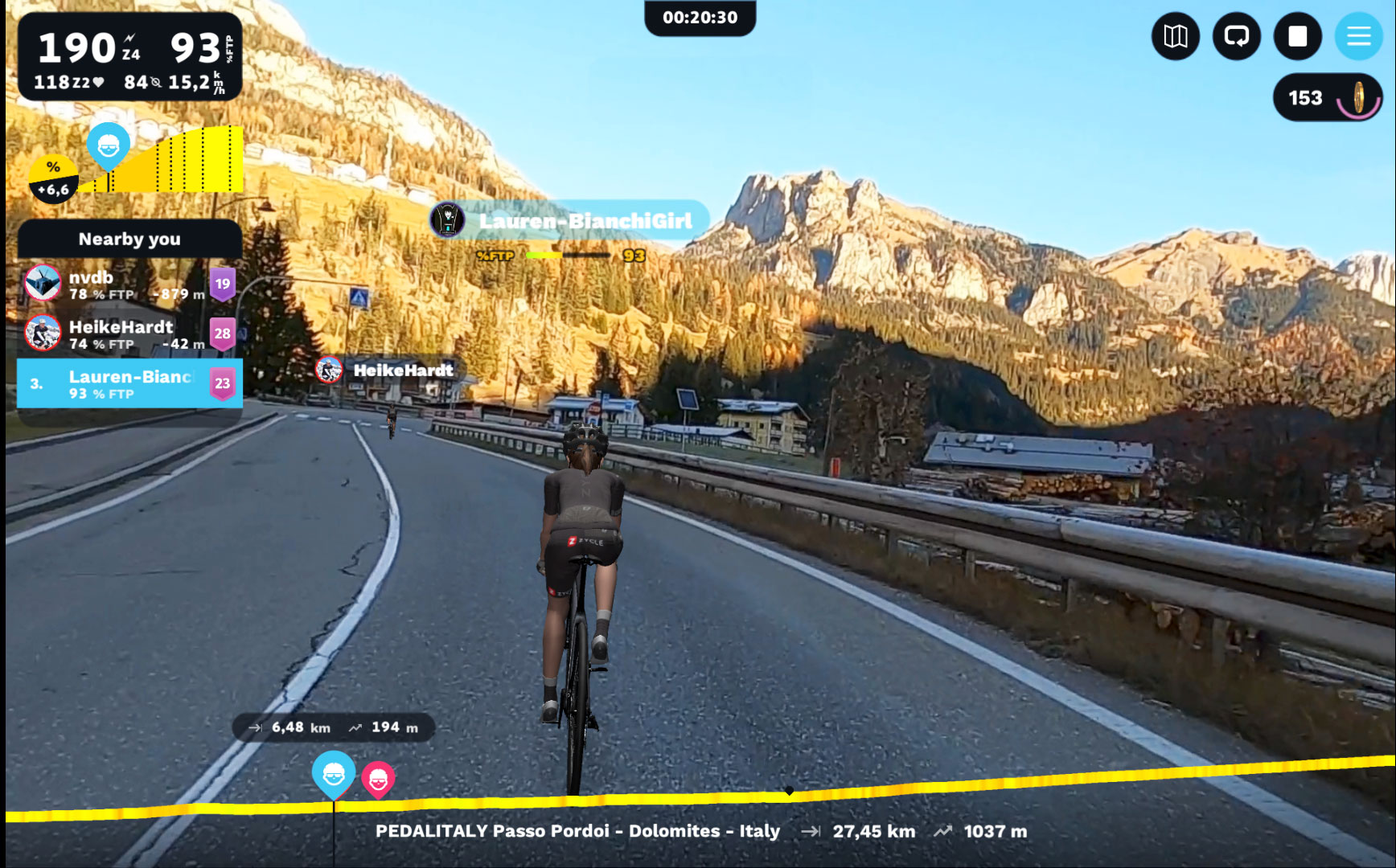 Passo Pordoi is also one of the seven classic Dolomite passes that amateur cyclists attempt to conquer in the famous annual Maratona dles Dolomites sportive event. The event takes the riders in a clockwise direction and where the pros in the Giro d'Italia have battled it out: the Campolongo, Pordoi, Sella, Gardena, Giau and Falzarego-Valparola. Like in the pro tour, thousands of spectators line the roads to cheer the riders on to pursue their dreams of finishing this incredible event. Another well-known sportive to venture over these classic and magnificent climbs is the Sellaronda Bike Day taking thousands of intrepid riders over the four passes, including the 'Dolomites terrace' or Pordoi every June when the roads are closed off for cyclists only. In the winter months, the surrounding area is a skiing paradise. The Pordoi ties the two most famous skiing stations of the Dolomiti SuperSki resort together with Canazei and Arabba setting the scene for a winter wonderland playground in the snow. 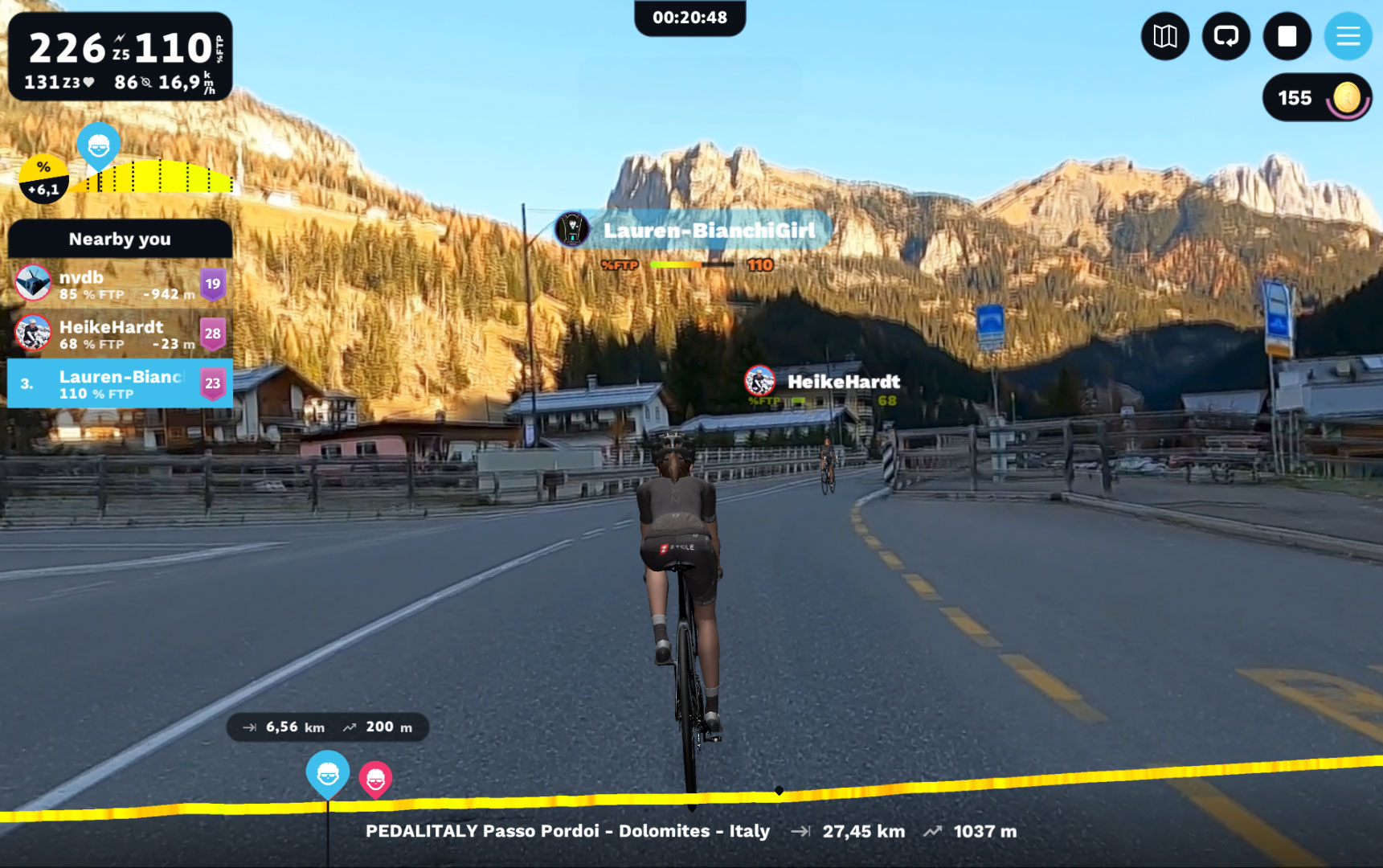 We will be ascending the climb from the more scenic Canazei side, starting near Moena and then in Vigo di Fassa, the road follows the Strada Dolomites. The road from the southwest heading northeast ascends for 13 kilometers with an average gradient of 6% over 28 evenly winding switchbacks that snake through Alpine meadows and shady forests with the scent of pine trees. The scenery is more spectacular from this side, as cyclists can enjoy a breathtaking view over the Sella Group with open roads allowing expansive panoramas back down the valley or upwards towards the rocky crags overhead. The climb in the other direction from Arabba is more popular at the Giro, is shorter but steeper and covered with more trees. Together, they meet up at this massive granite outcrop of the Pordoi summit. 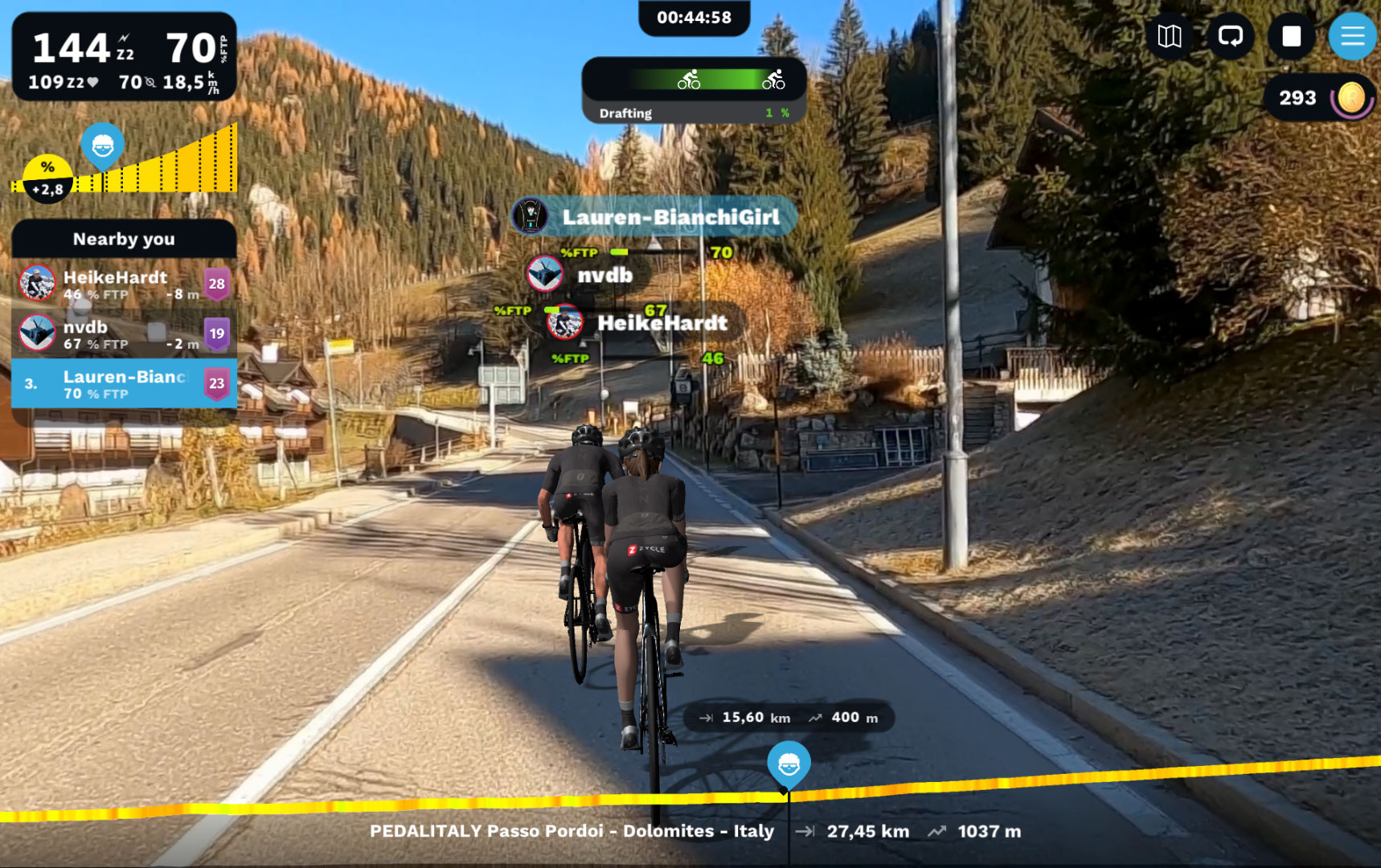 Now you can do it yourself - How to ride it.

The 27,5km ROUVY route contains a flat section that forms a run-up to the Pordoi climb. The average gradient over the entire course is 4%, and 1037m over the whole route but 791m for the actual ascent. You can use the first 6km (avg of 2,3%) as a good warmup to get the legs ready before tackling the switchbacks. Keep your cadence between 80 and 90 in this section. From the start of the climb, watch your heart rate and aim to keep it as low as possible while keeping your legs spinning comfortably. 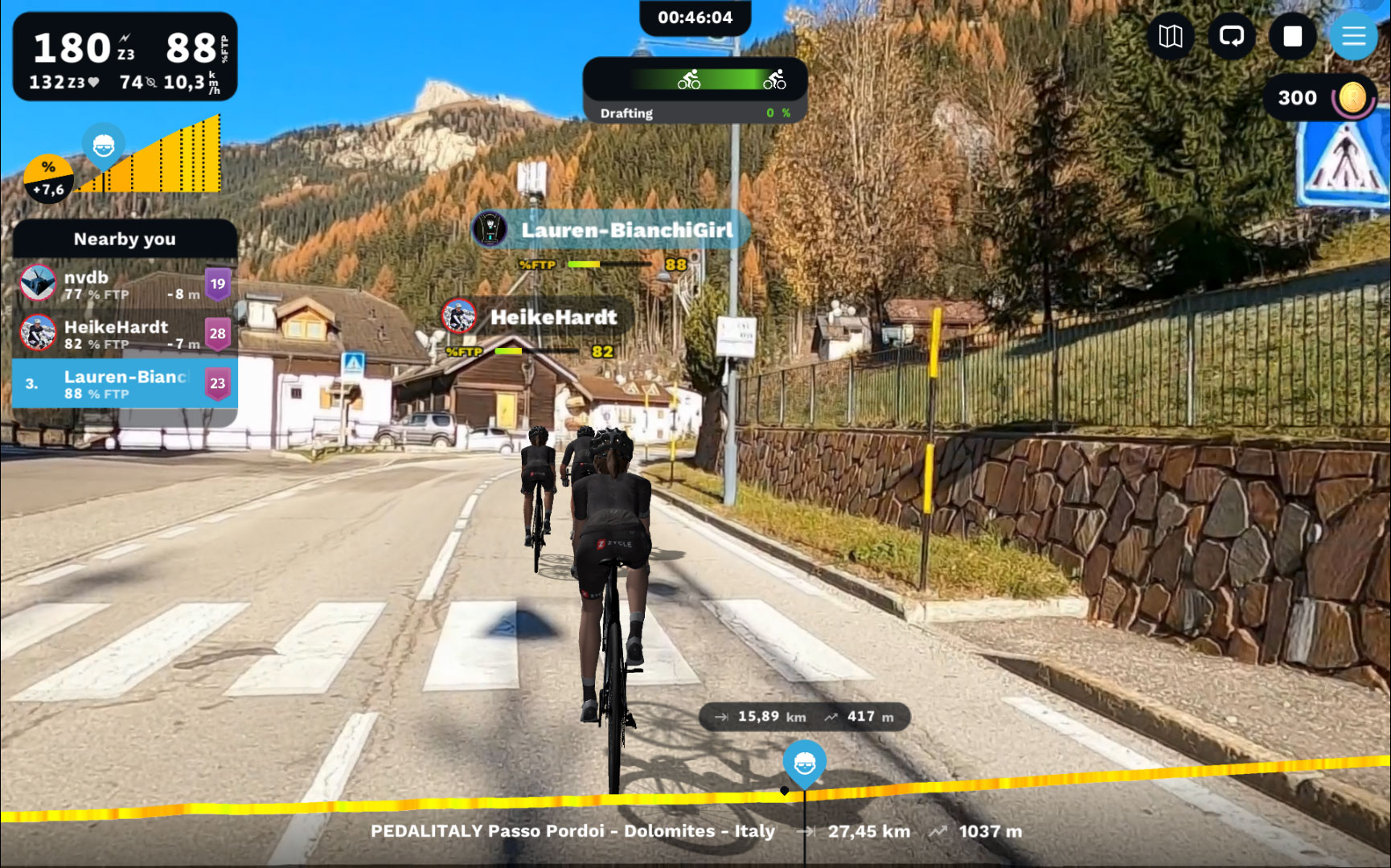 To pace yourself perfectly, enable your app settings to show FTP rather than W/KG allowing you to pace correctly and not overexert yourself too soon. Keep your effort in upper zone 2 for this section. If you feel good, you can increase your power to zone 3 up to 24km. After that point, if you think you have the energy and your heart rate is not already at its limit, you can extend yourself into your zone 4 power until the end, maintaining it right to the top if possible. Regards nutrition, you will need to consume a couple of sips of water with some electrolytes every 15 minutes. Try to eat a small energy-rich meal a couple of hours before the ride, so that you won't need to eat on the climb, which is not an easy task. 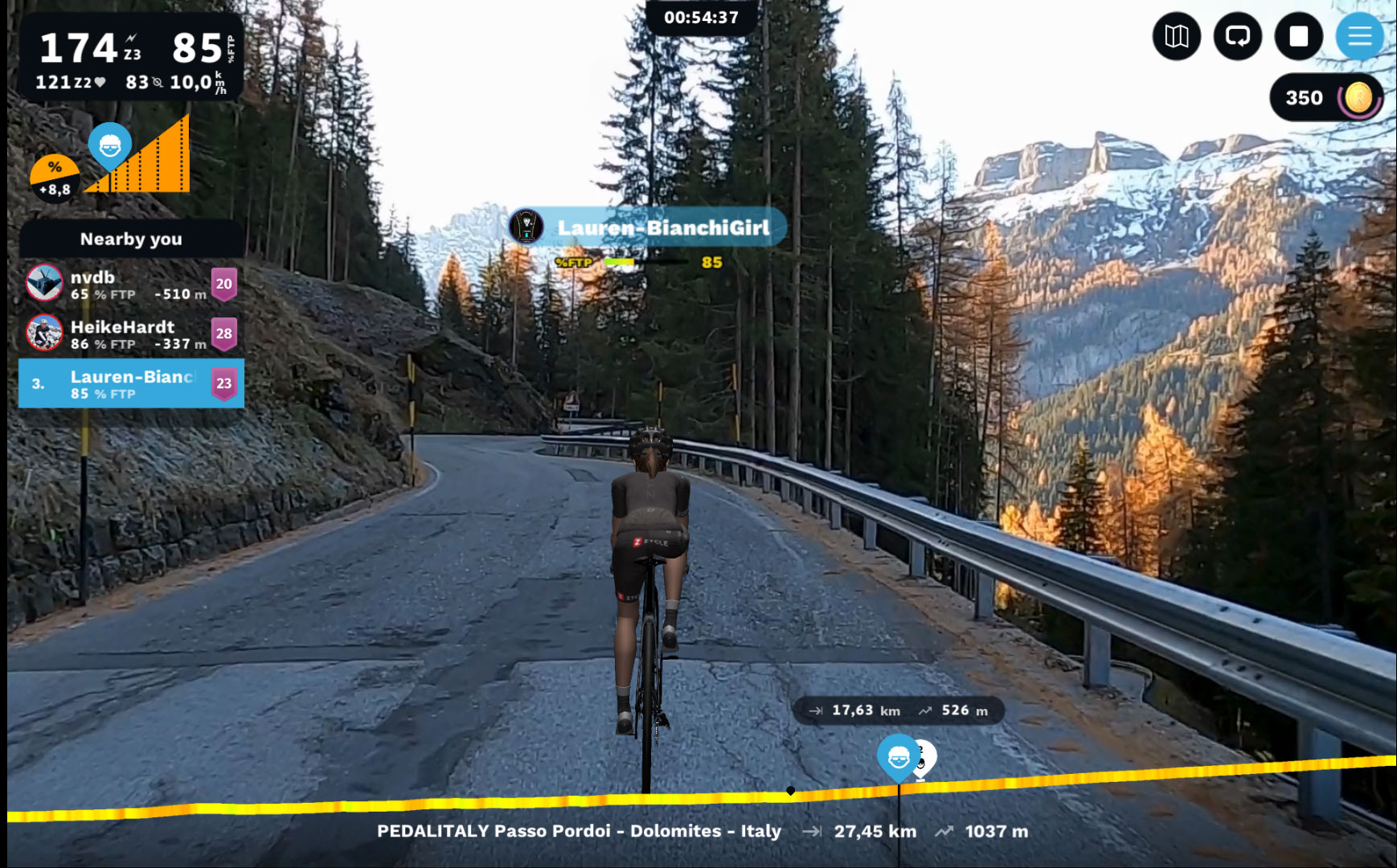 Estimated times to complete this route: 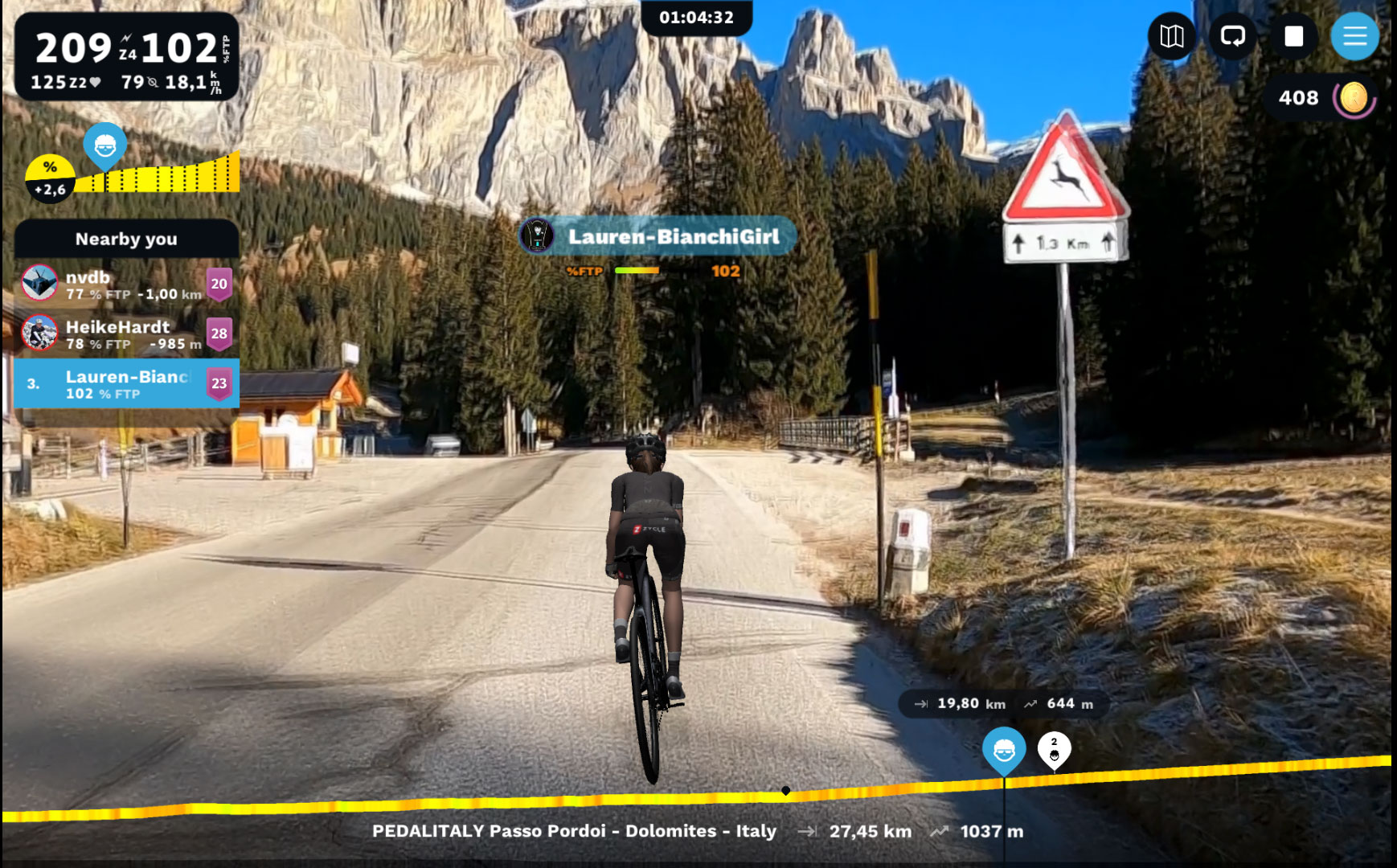