Luz Ardiden is one of the most spectacular and challenging climbs starting from Occitanie, France, in the beautiful area of the Pyrenees National Park in the Pyrenees mountains. The climb, first appearing in 1985 at the Tour de France, has also featured twice so far in the La Vuelta, being so close to the Spanish border, the last one featured in 1992. It is ranked as an "Hors Categorie" (HC) climb and among the most difficult in the Tours. Luz Ardiden finishes on a dead end and always appears at the end of a stage. 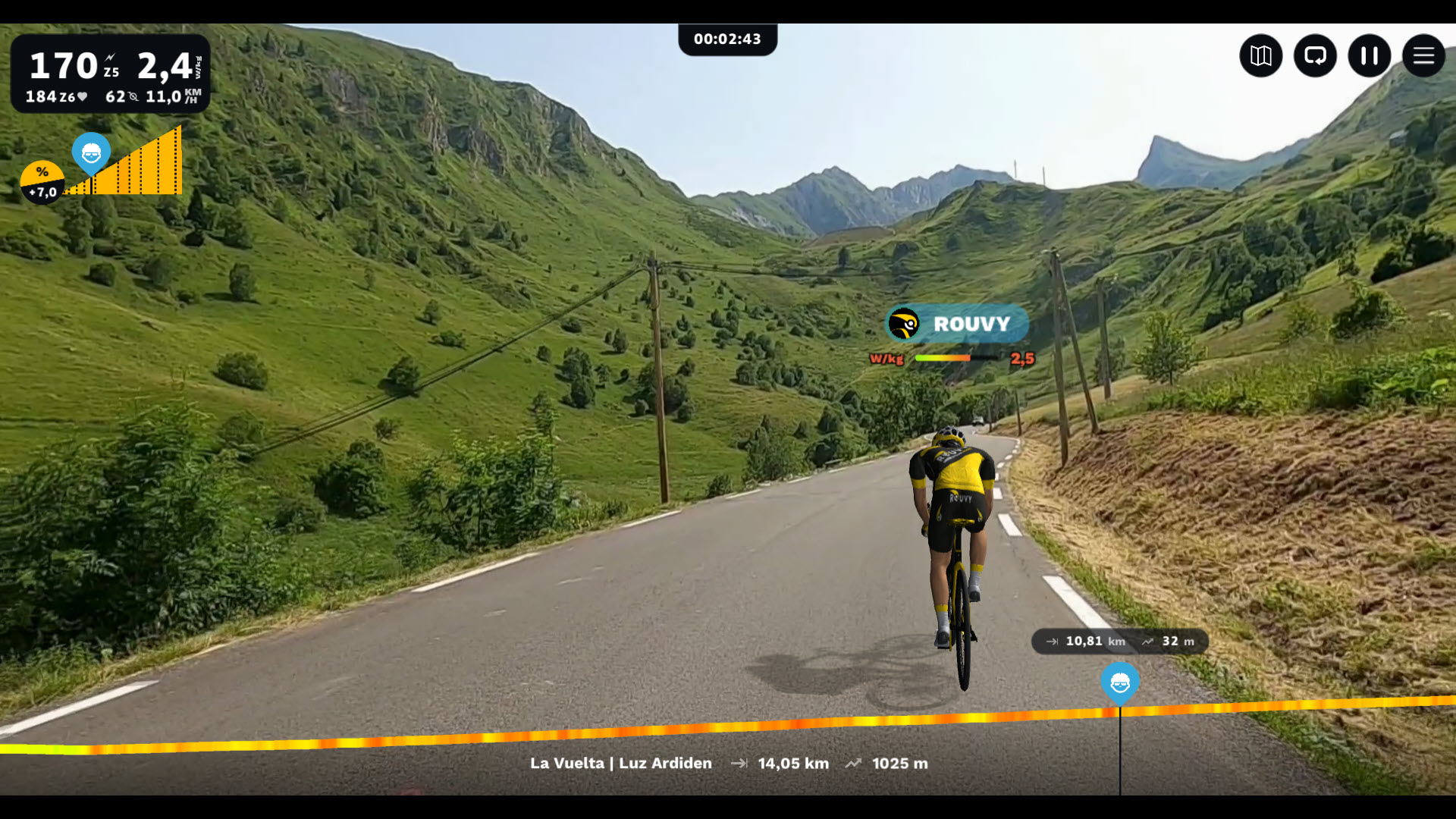 Starting on the outskirts of the village of Luz Saint Sauveur, the picturesque and quiet climb ascends 1000m over 13km at an average gradient of 7% and a maximum of 10%, where you can attempt the 30 switchbacks leading upwards. The hairpin bends resemble the infamous Stelvio's with 44 turns and the equally iconic switchbacks of Alp d'Huez, which has 21. The Col du Tourmalet in this same area of the Pyrenees, joins this climb but ends at Luz Saint Sauveur, so it would be an idea to try this route as well as a two route Challenge. 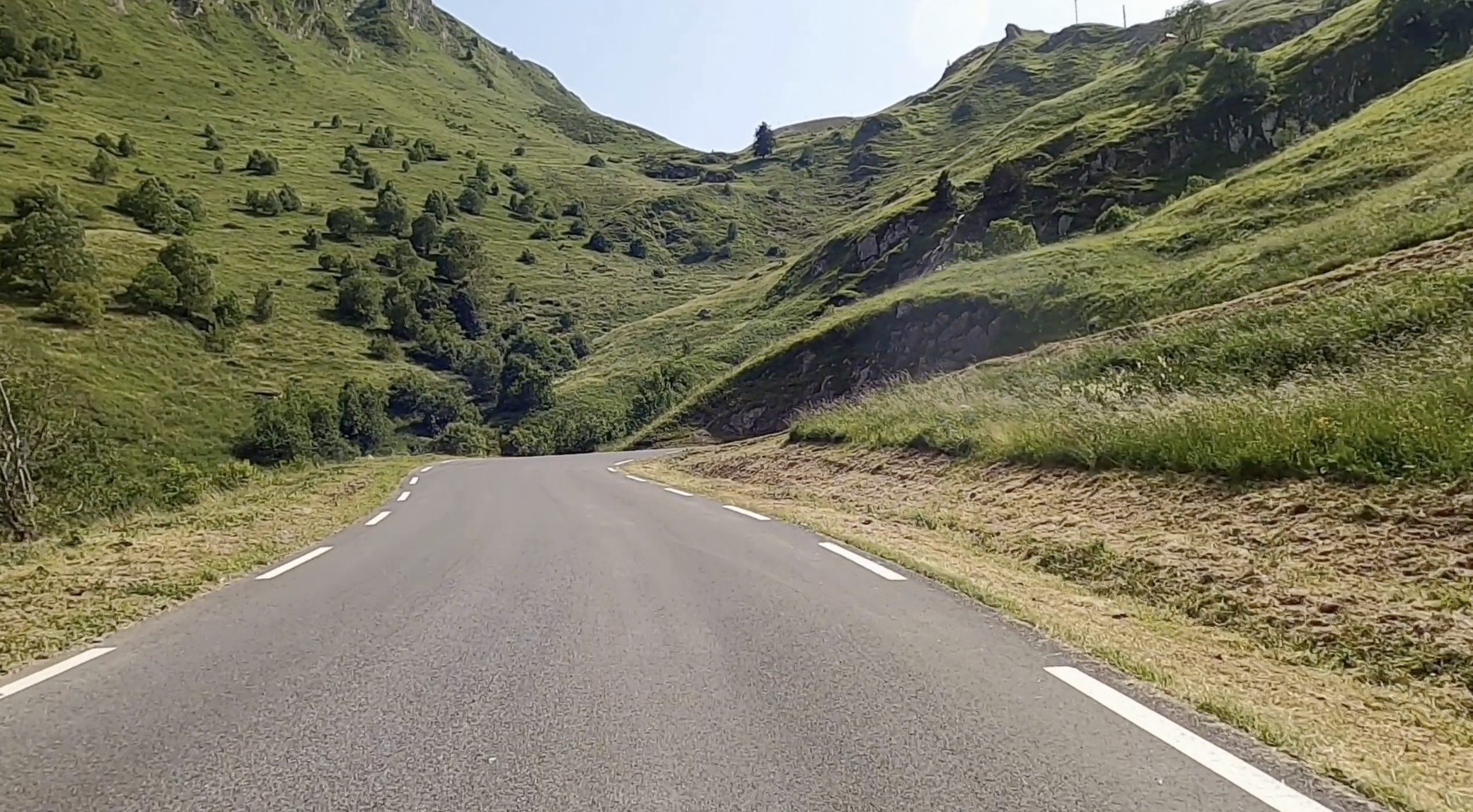 The first few kilometers to Sazos are not very difficult. But then suddenly, the slope goes off at km 5 in a long straight line making up the most challenging part of the pass, not going under 8%, before a series of twists and turns through peaceful greenery, alpine forests and small farms. After 10 kilometers of arriving at the small village of Grust, the landscape becomes more rugged as the gradient ramps up to 9% with glimpses of the valley below, and you face a series of hairpin bends with a slightly lower gradient. When reaching the final km, it becomes much gentler before a last hairpin turn on the right and the arrival at the summit of this mythical climb. From the start of the ascent, there are helpful bike-info signs every kilometer indicating the distance to the top, the current altitude, and the next kilometer percentage. The stunning view of the last 4km is compelling as the road zigzags below the summit, which is always in sight, coaxing and daring you to reach the top. 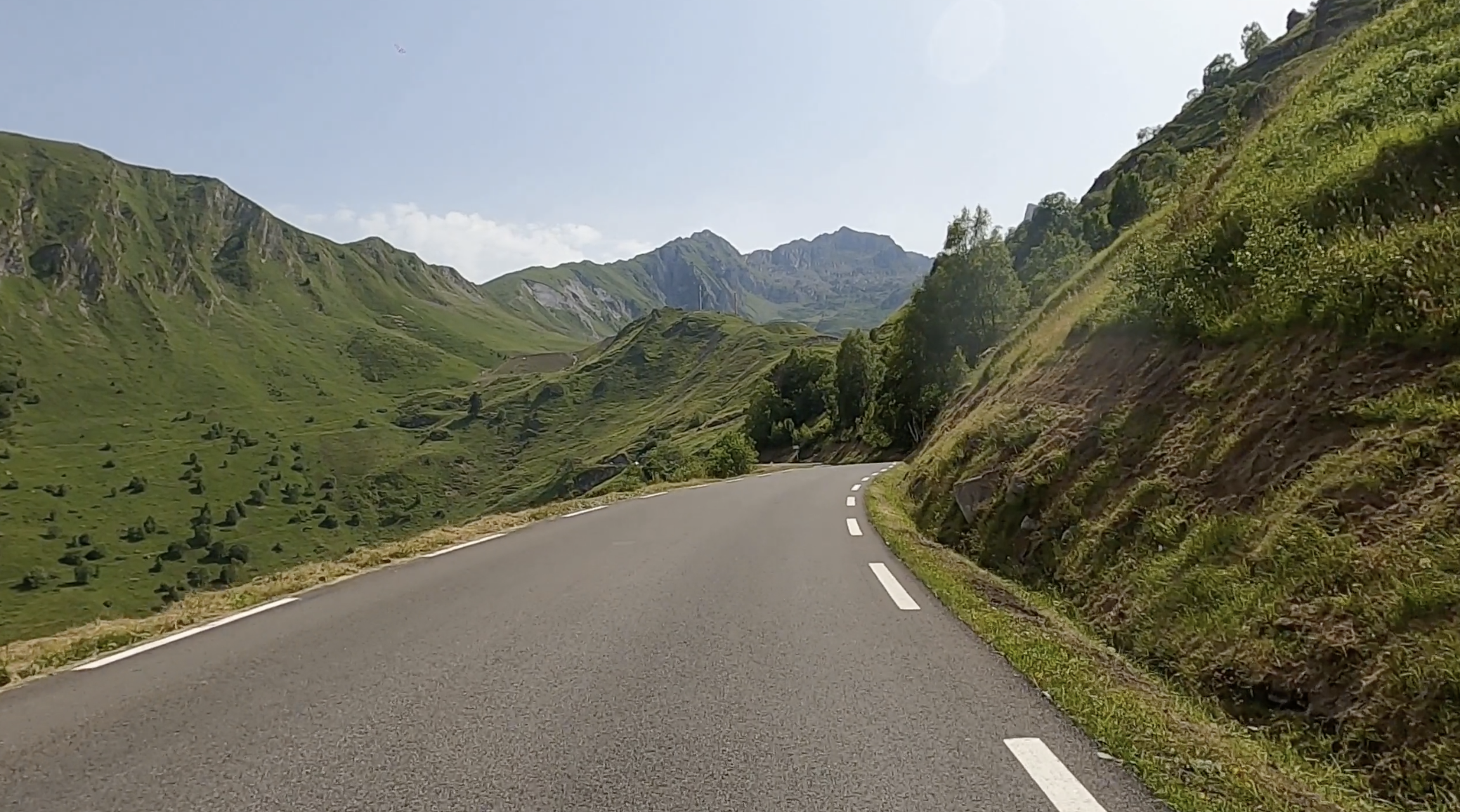 During the 2003 Tour de France stage on this climb, Lance Armstrong crashed just as he was accelerating away from Ullrich and the leading riders with about 10km to go. He had just raced past the attacking Iban Mayo (Euskaltel) and moved to the right side of the road when a fan's yellow musette hooked Armstrong's handlebars taking him and Mayo down with him. Tyler Hamilton and Jan Ullrich told the other riders to slow down in the act of chivalry and wait for Armstrong, who caught up and went on to win the stage by 40 seconds. "I'm grateful for Jan for remembering my gesture of two years ago. What goes around comes around," said Armstrong, who waited for Ullrich when he crashed coming down the Col de Peyresourde in the 2001 Tour. Watch the drama unfold in the history of this climb HERE

Not to forget the triumphs of Indurain, who got away to take the stage win from Lemond by 6 seconds at the 1990 Tour de France. Tadej Pogačar dominated this climb and won the stage solo with an average speed of 22,4km/h at the Tour de France in 2021. 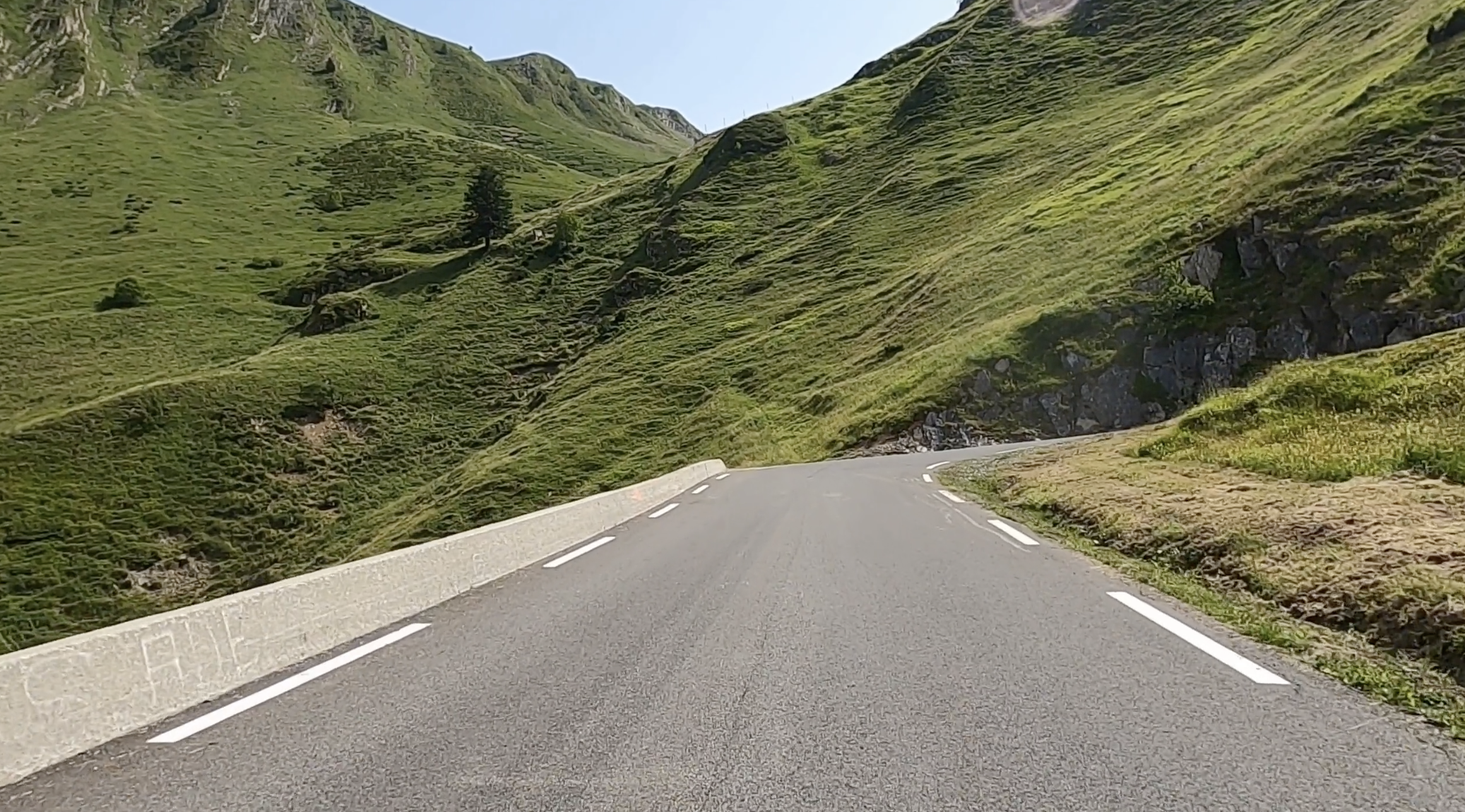 Luz Ardiden is a tough climb that a rider should do with optimal fitness. You will need a foundation of base training to take this on. Check out The First Weeks folder in the app Workouts to improve your base training. It is best always to take a conservative approach to the climb, which is challenging. The first 5km are pretty gentle in slope terms so take these first few kilometers easy by spinning and finding a comfortable pace. The middle section is strenuous, so keep this in mind and spin at a high cadence using easier climbing gears. As the switchbacks begin around the 8-9km mark, settle into a rhythm and remember to keep drinking little and often.

Strava segment: Richard Carapaz rocks the KOM with a time of 35:27 with Sepp Kuss in second with an average power of 359 watts, followed by Ben O' Connor with an average of 387 watts. See what you can do!

You can join the fun and competition by racing the Luz Ardiden climb during the 'La Vuelta Virtual Grand 10' series happening between December 7th and December 19th. Register HERE 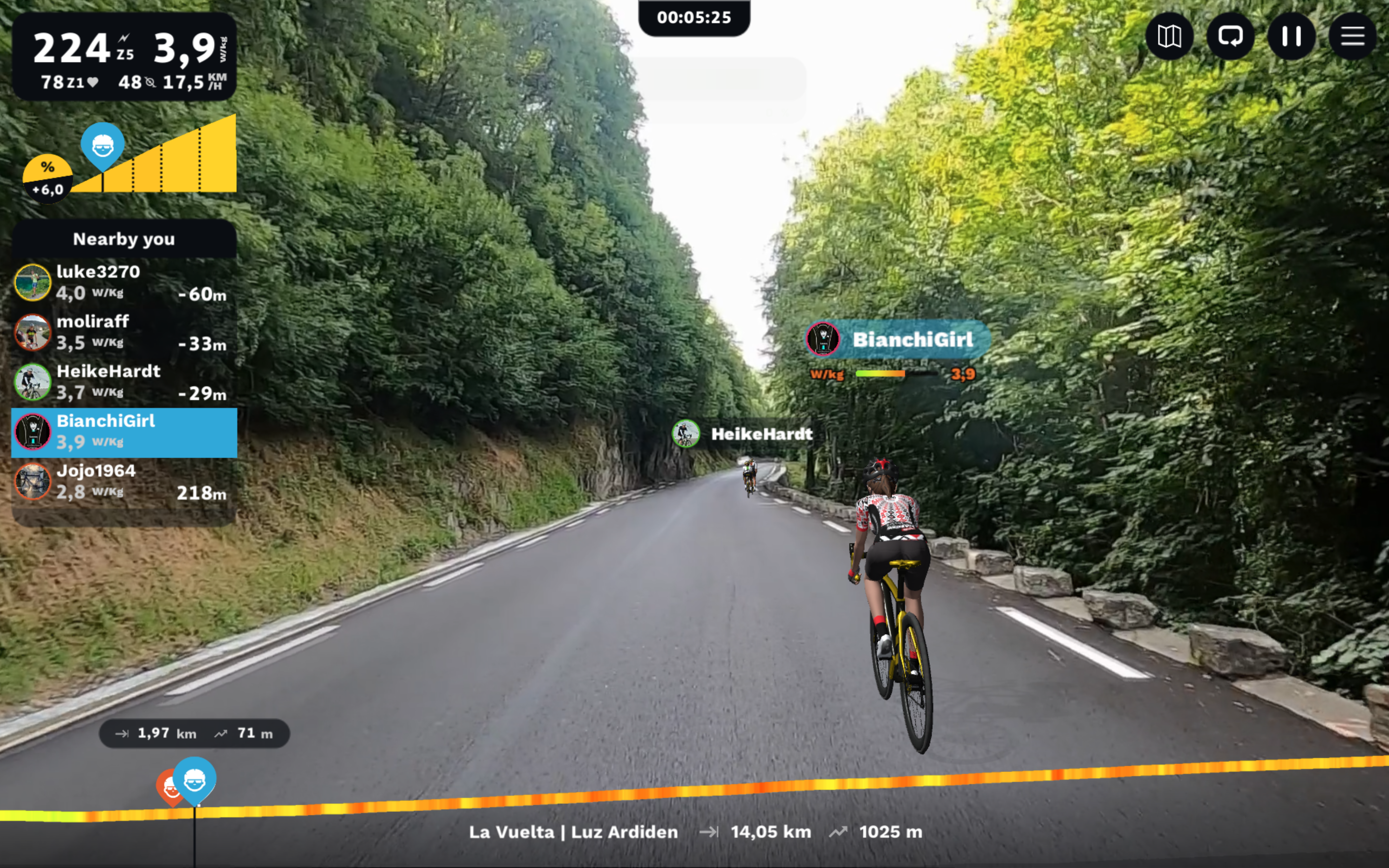