Rouvy offers many charts with which you can compare your data and compare performance with other users. All rankings are primarily available on the community sites of my.rouvy.com in the Rankings section, but some of them you’ll be able to find in the apps as well.

Summary results of the current Rouvy season and results from the history of all previous seasons sorted by career level and TSS. Only TSS based activities (activity contents the second-by-second power data) can be included in the ranking. 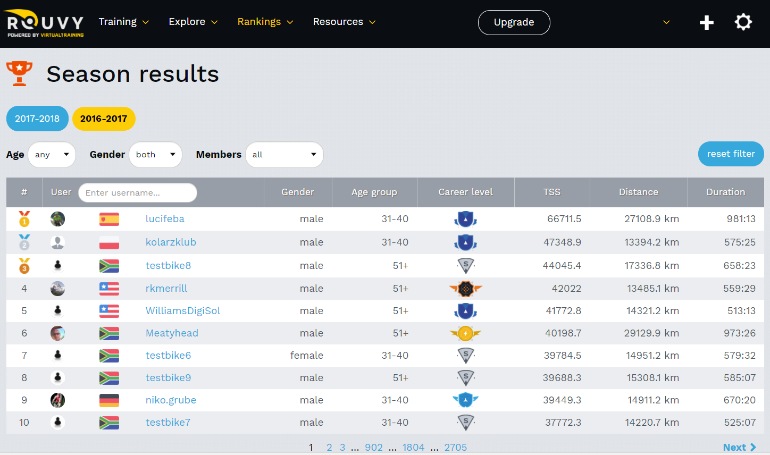 Route records within the route details. Any user who completes the route in RACE mode will be enrolled in the route record table and can match with each other. Rankings are counted separately for each new version of the route (So, if the route composer changes the altitude profile, the route is saved with a higher version, and the leaderboard counts again.).

Watt zones: User ranking by time spent in each of the load (watt) zones.

Prestige awards - Champions of the Week - are given for the past week every Monday at 15:30 CET (Europe Time):

Guy of Week: User who trained most hours for the last week.

Route creator: A user who created and sent the most virtual routes to the portal for the last week.

Calory Burner: A user who burned the most energy during training for the last week.

Climber: A user who climbed the most elevation meters in total during training for the last week.

If you sign up for a challenge, you always have some tasks to complete. Depending on the type of the challenge, all activities or indoor/outdoor only, etc., are counted. If you want to go through certain routes, do not forget to ride in ‘RACE’ mode!

What activities are counted in the charts? Is there a check?

Generally, Rouvy works with all activities that have “second” data (second-by-second data). Once the activity is uploaded, the data is automatically scanned, the validity checked, etc. If the system detects a suspicious phase, our support team then scans the data and, in extreme cases, the activity is marked as damaged / invalid and is not counted in the leaderboards. More about it in a separate article.

We are currently intensively working on an enhanced version of the invalid activity recognition system, and, at the same time, we are preparing a tool to discard all specific users' data from ladders. For example, if they use a user profile for multiple users, we will be able to recognize this "issue," and the user will be tagged. Also, users who attempt to circumvent the rules in some way will be called upon to redress, and if they do not, they will be removed from the leaderboards.

How are Winning Challengers Drawn and Monthly Winners in Rouvy Career?

All winning draws in the Rouvy application match the draw standards. Because of possible frauds that cannot be avoided in the indoors, the winner always is drawn from the group that has met the rules and does not win the "best" automatically. Drawing is done in an automated internal system, the algorithm is built on a random selection.