Conquer the mythical and legendary Transfagarasan pass in Romania on a 44km segment with almost 1,500m of ascent that is just a taste of the entire 150km long highway. ROUVY will take you on a magical journey of discovery along this famous and second-highest paved road in the magnificent Carpathian Mountains. The road climbs to  2100m, making it the second-highest mountain pass in Romania after Transalpina. The highest point will finally appear at the tunnel at the stunning Lake Belea at 2042 metres, a bit further on from where the ROUVY segment ends. The road is a popular location for cyclists of a popular Sportive, bikers and driving enthusiasts and the pros use it as an HC climb in the Sibiu Cycling Tour and Tour of Romania. 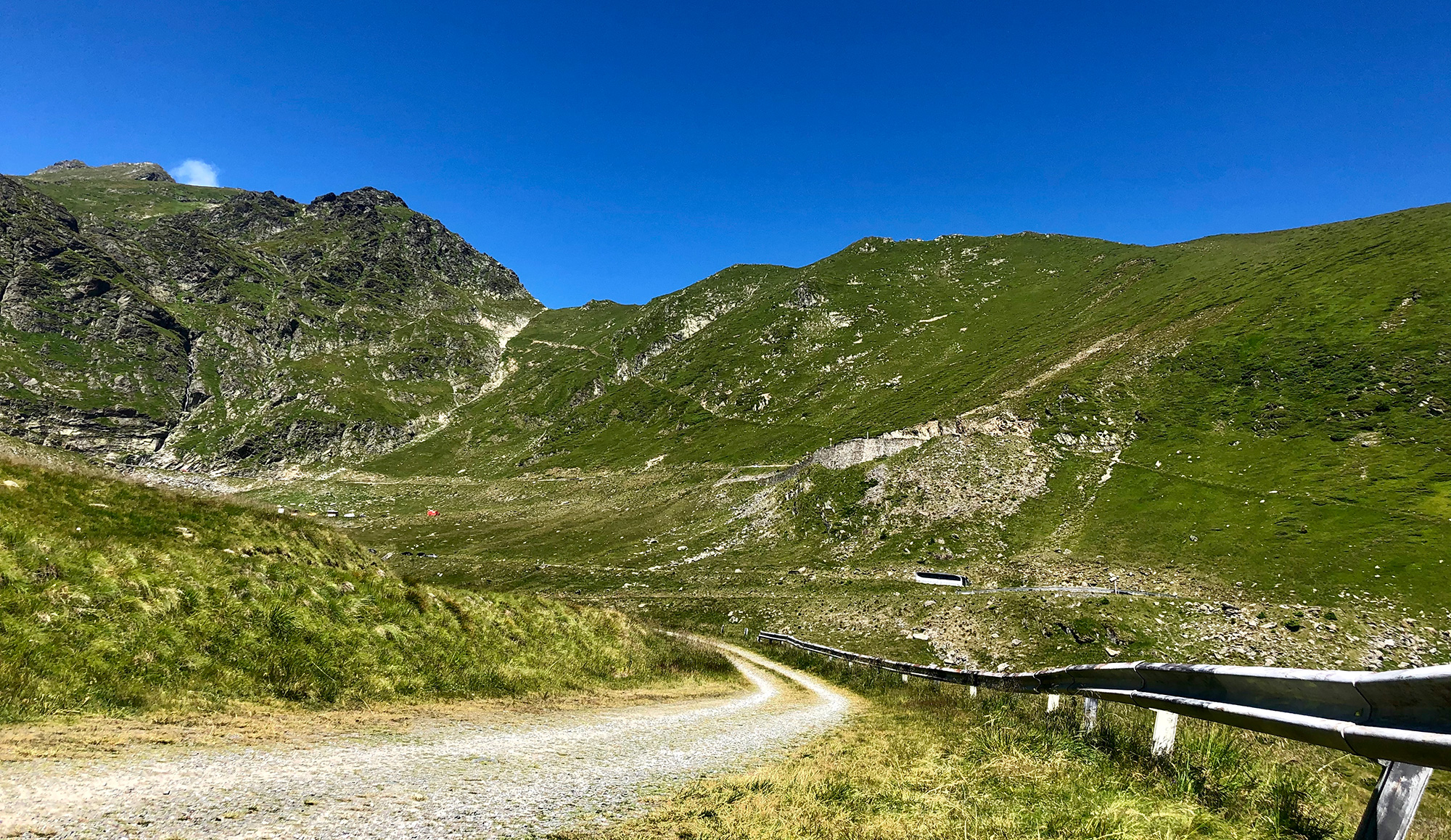 A bit earlier in the real and long route, it should be mentioned that one passes a mystical place on the way to Vidraru, our starting point. The Poienari Citadel is a famous landmark hidden in these mysterious mountains of Transfagarasan. Here one will find the spot where the well-preserved ruins of Dracula Castle sit high up in the alpine forest above the road. The fortress is, in fact, the actual medieval castle, constructed early in the 13th century where the notorious and feared Vlad the Impaler or Vlad Dracula resided. He inspired the myth and dreaded character of Count Dracula.

In the Ceausescu era, the military built the route for strategic reasons to assist and lead troops northwards as an escape route against a potential invasion by Russia in the early seventies. Today we have a spectacular road to venture along while admiring its beauty in fauna and flora. 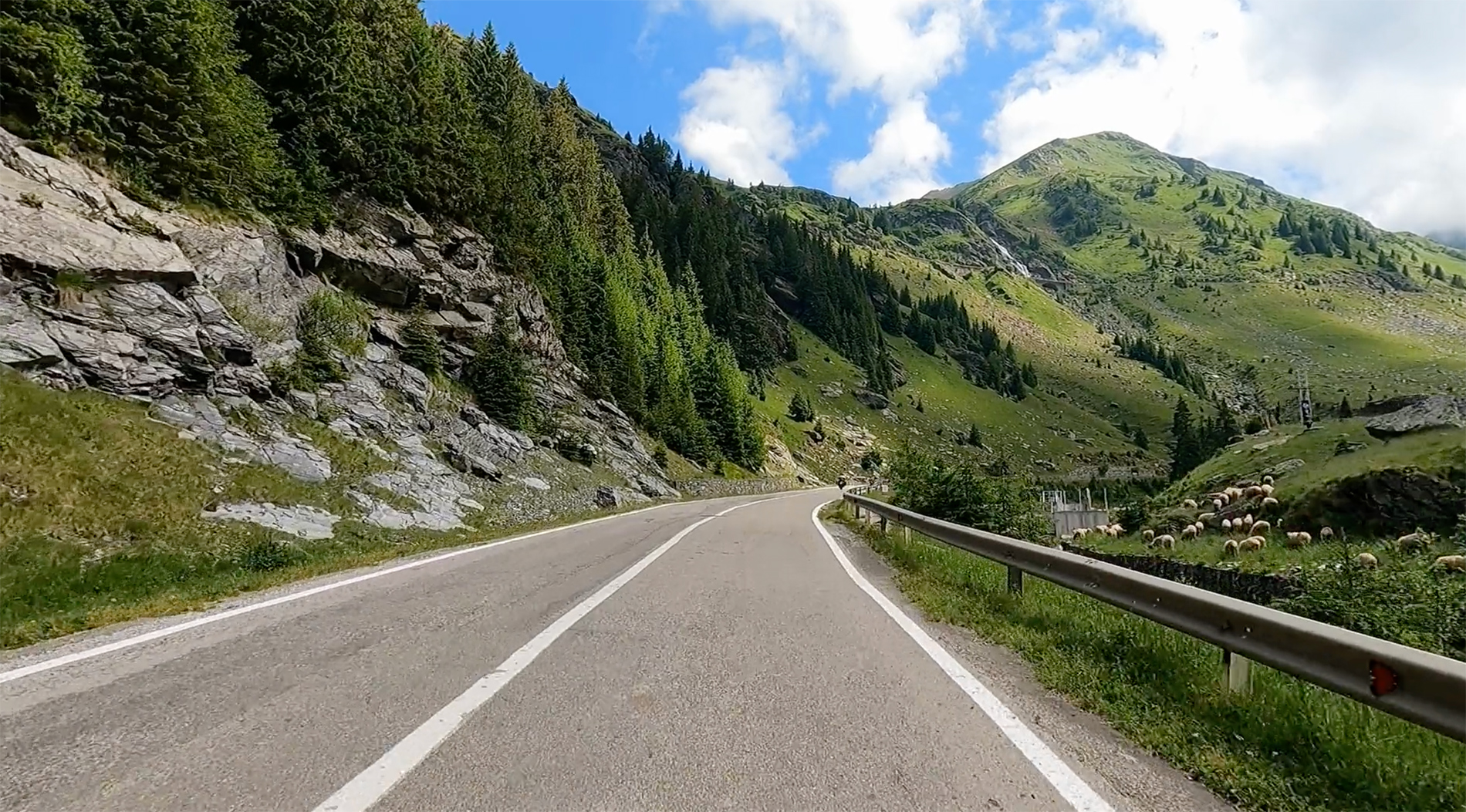 Our ride will begin at the artificial Lake (Lacul) Vidraru, in the shadow of the mountains and where an ancient village lies submerged for eternity. The dam contains one of the largest hydroelectric plants in Europe. We follow a tributary along a gently rolling terrain that winds and turns for the first 20km. Look out for the big brown bear sitting on the side of the road. Romania is a wild place with mostly undeveloped forests providing the perfect habitat to 60% of Europe's brown bears that can weigh up to an incredible 480kg! Six thousand of them roam the Romanian forests, the largest population of bears in Europe. Bears also share this habitat with lynx, wild boars and wolves. The route follows the lake's edge until the valley slowly becomes steeper before climbing sharply for the next 25km. The scenery and views begin to open out of the dense forests, exhibiting a splendour of spectacular vistas. 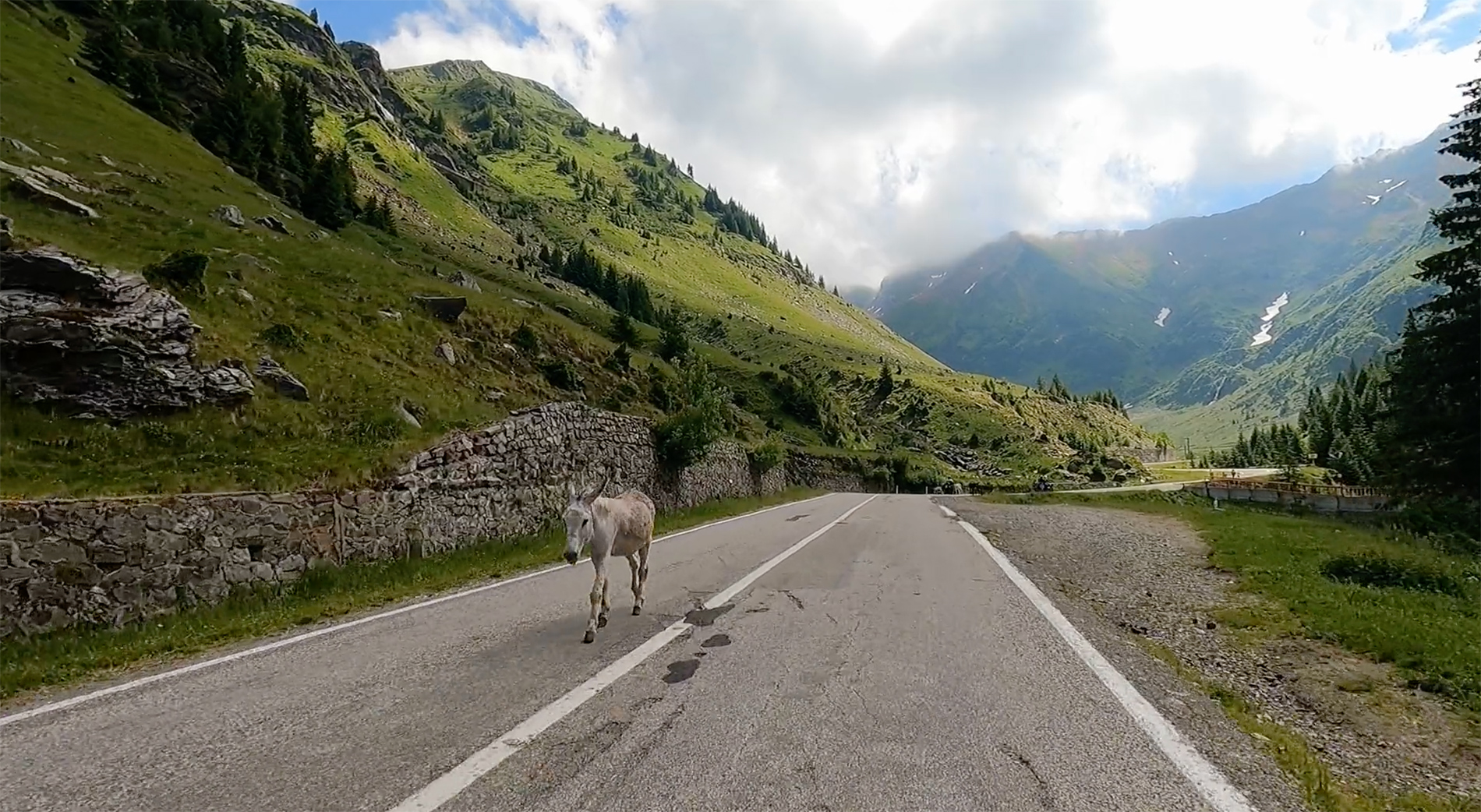 Riding further on the right, you'll pass the breathtaking and majestic 40m high Capra (meaning goat) waterfall cascading off the rocky cliff face, carving its way down in many tributaries and plunging into a pond, providing an idyllic backdrop to a picnic spot on the right. This point serves as a perfect food place to stop for a break before the climb and as the hard work starts. Stall owners sell delicious food and drinks here, including sausages, cheese, and other homemade treats. Let this be your snack pit stop before moving through the winding switchbacks. 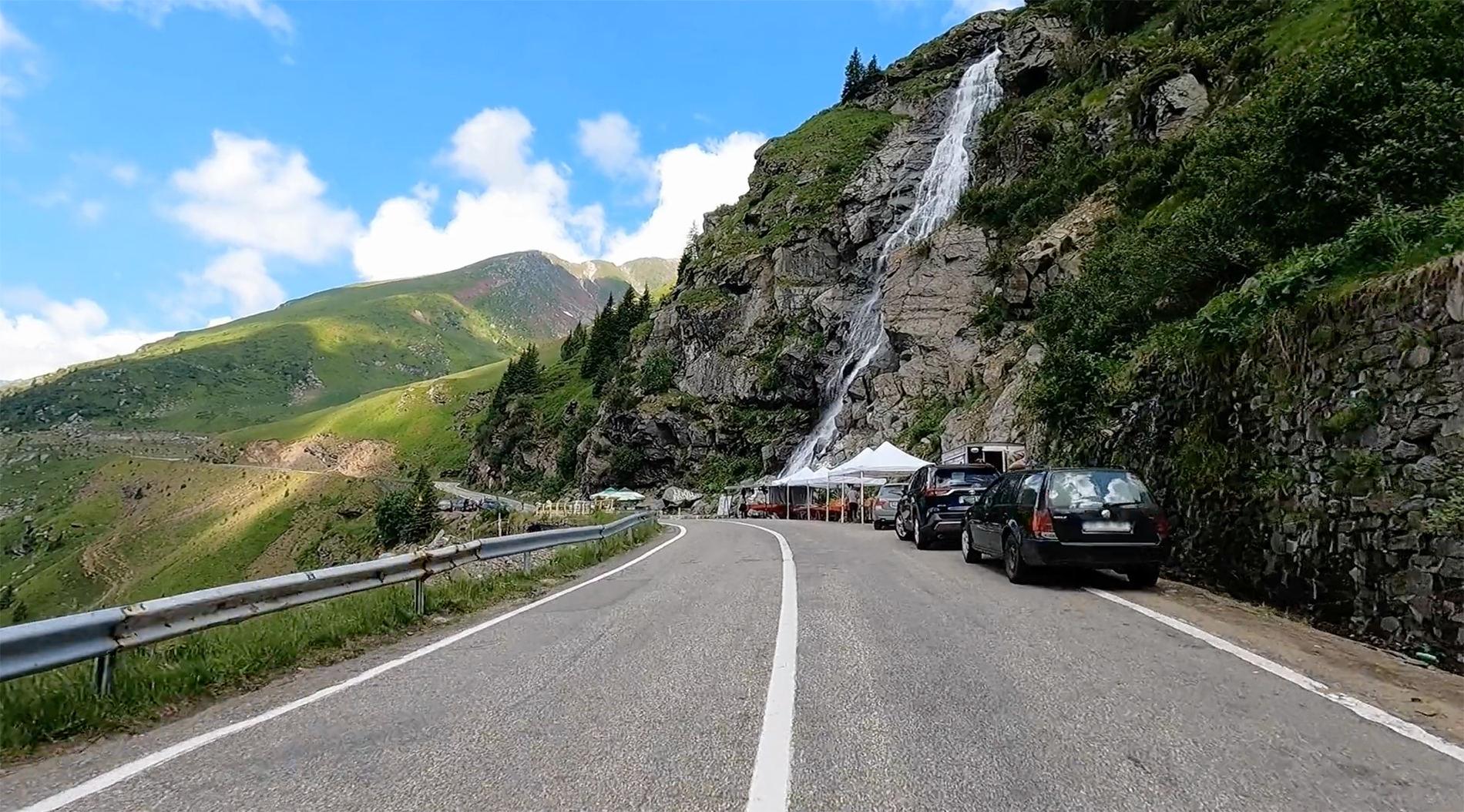 You'll see the most spectacular and varied scenery as though from a fairy tale book. You'll find crystal clear lakes, partially covered tunnels, cascading high waterfalls, streams, thick, lush green alpine forests, mountains and vistas with sheer cliffs. At the top, Balea Lake is a glacial lake in the middle of one of the most mountainous regions of the Southern Carpathians, the Fagaras Mountains. From here, hiking enthusiasts can reach the highest mountain peak in Romania, Moldoveanu Peak, at 2544m. Other attractions include the spectacular glacier lake Capra or the Fereastra Zmeilor rock formation. 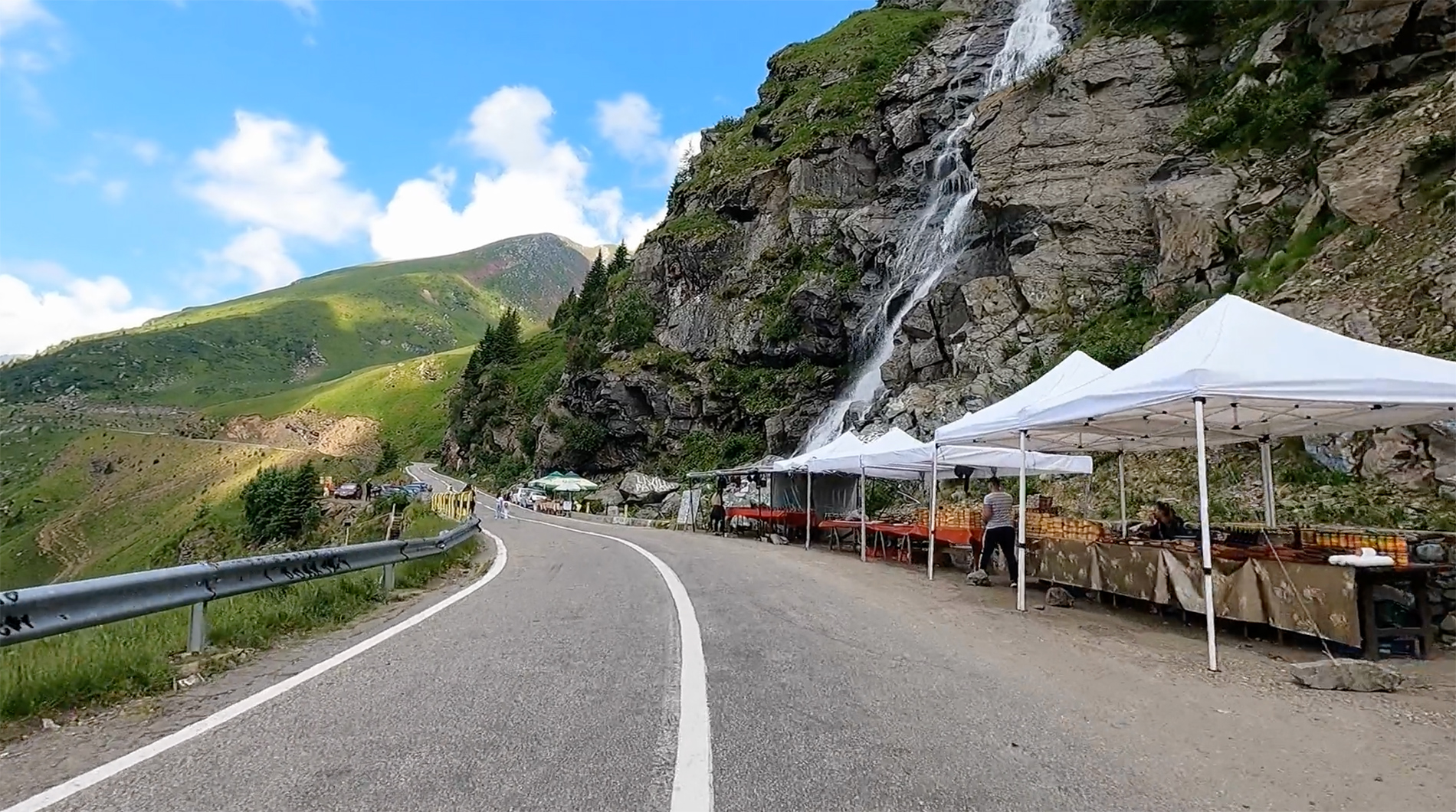 Take a look at this video to get a multidimensional feel for the ride before you jump on your indoor trainer.

If you want a casual ride, try this: Take it easy and conservatively as a good warmup over the first 20km because the climb ahead is long and, together with the rollercoaster first half, makes for a solid endurance indoor training ride. Use the first 10km to spin the legs in zone two power until well into the climb. There are a few short little ramps while the road twists and turns before the long climb but resist powering up these. You may not want to burn all your matches too early on. The challenging part has an irregular gradient with an average of 5% and a maximum of 12%. 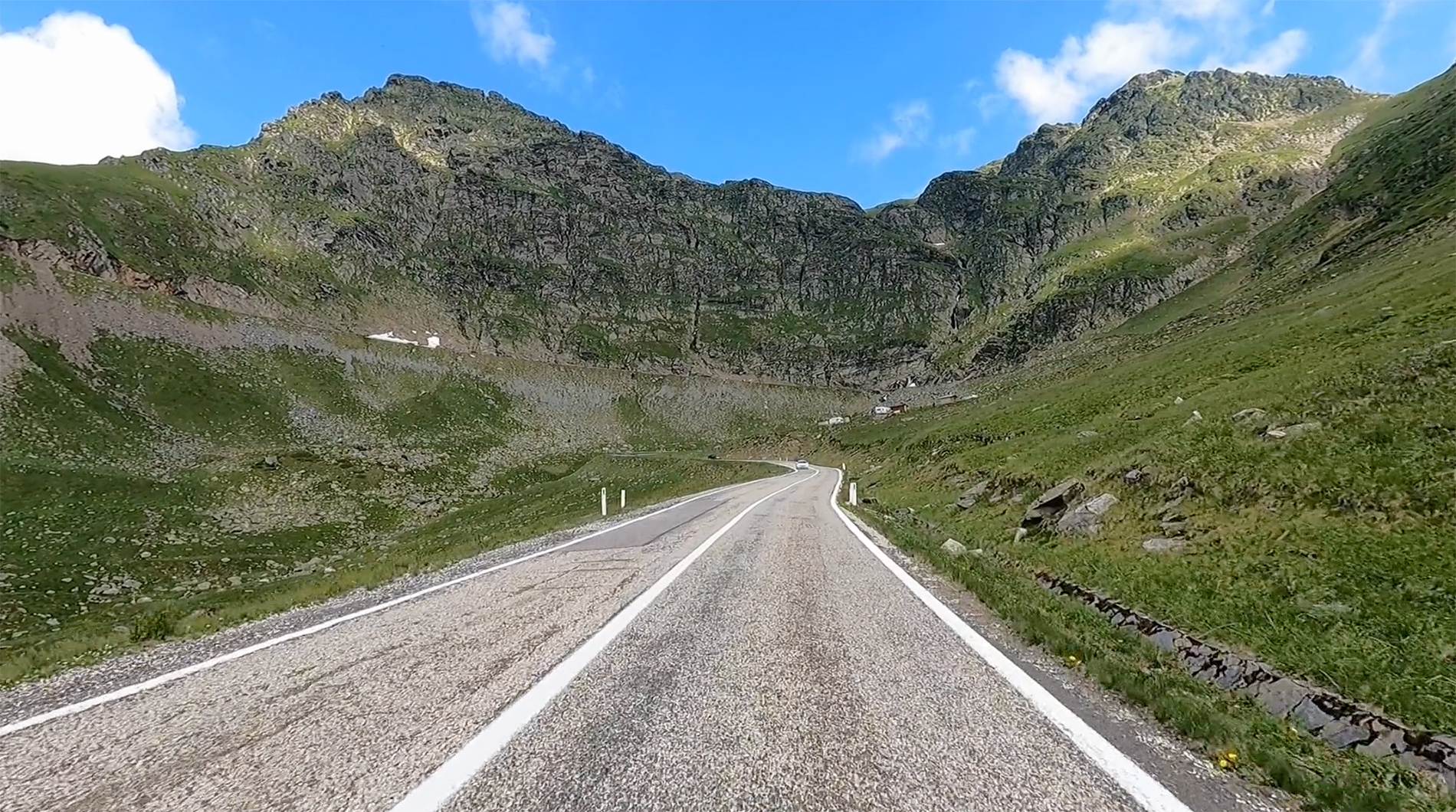 Find a rhythm and a steady and the highest cadence you can manage that will help optimize your power output while minimizing neuromuscular fatigue. When you get to about the 4km mark before the summit, if you have the energy, push on with an increasing tempo. At 2 km to go, if you feel good, drop your cadence and train your muscles to generate more power until the very end, building slowly from 80rpm down to around 65. Remember to have enough water, some towels and good airflow using a fan or two if it's warm. Have a fantastic ride, and beware of the bears! 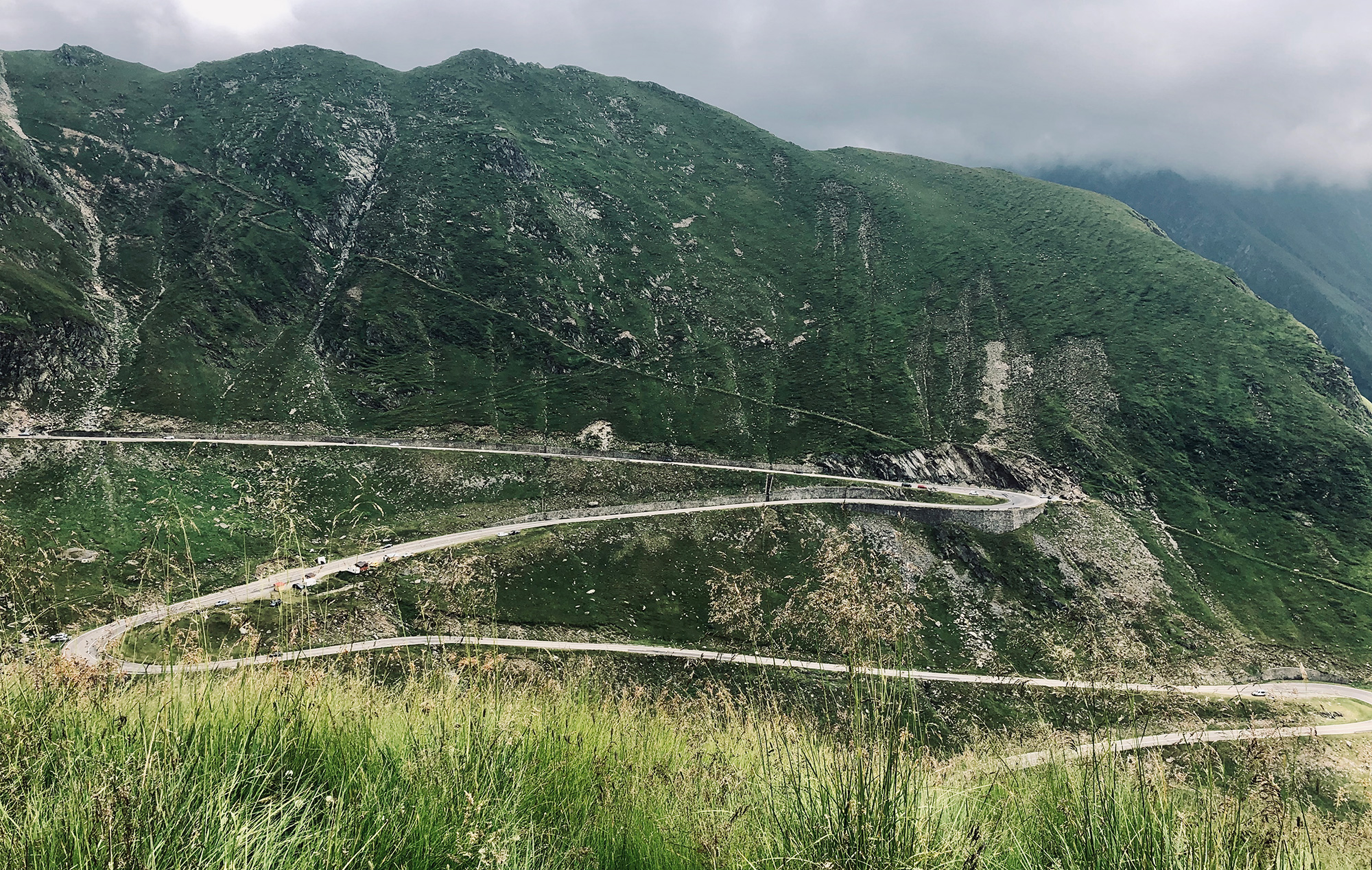 Here are links to all the routes related to this climb from both sides and try to make a goal for yourself to complete them all!

King of Transfagarasan - The Southside, famous for the amateur cycling sportive and part of the toughest triathlon in Romania, Transfier 70.3. Watch out for the bear sitting on the side of the road!

Transfagarasan North - Look out for the bear crossing the road! Ride past quickly! :-)