The inhabitants of the town of Geraardsbergen had an old expression: There are three great walls in the world, The Wall of China, the Berlin Wall and our Wall!' The Muur is one of the most famous and renowned climbs in Europe and a must-do bucket list challenge for every avid and passionate cyclist. It is legendary because it is one of the most challenging climbs, not for its length but for the steepness of the gradient and ruggedness of the cobbles, especially near the top, where it becomes brutal. 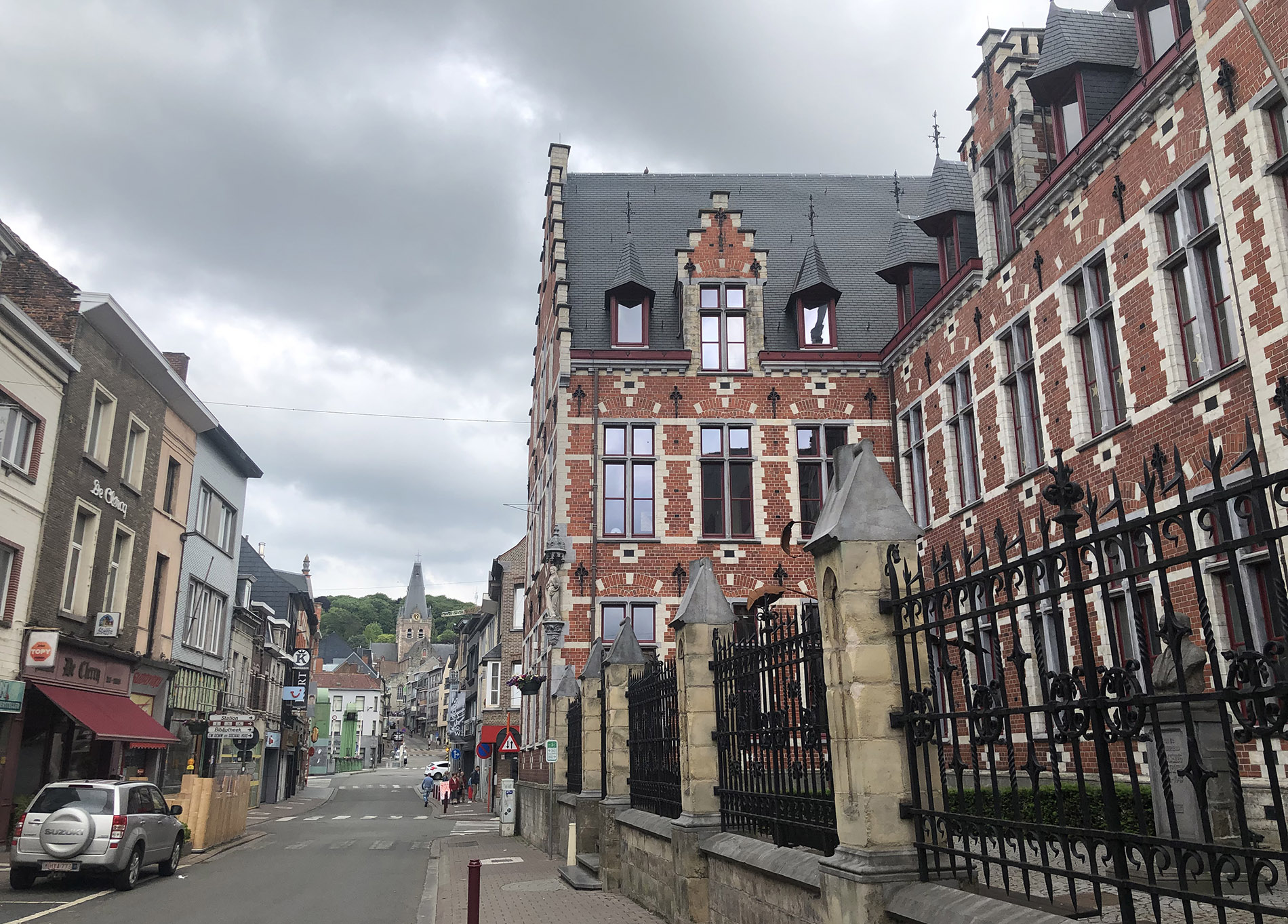 The iconic Muur van Geraardsbergen is used in many spring classics and featured in a special event organized by the Challenge Family, where over 1,100 triathletes took on the Skoda Challenge Geraardsbergen. The event consisted of a 1.9 km swim, a 90 km bike and a half marathon run. The triathletes had to scale Geraardsbergen twice (1,07km and 100m climbing) because the bike leg included two loops! Take a look HERE at what happened in the race.

The climb is referred to as The Muur (wall in Flemish) or the Muur van Geraadsbergen and in French, the Muur de Grammont, and the last part is called the Kapelmuur. This was the critical feature or centerpiece in the Tour of Flanders before the organizers changed the route in recent years and it is epic because it has been the battleground and decisive point of the course. The pros have fought the most exciting battles on this technical climb: Cancellara (Spartacus) vs. Boonen in 2010, with Cancellara gaining a massive 250m gap on his opponent, and Musseeuw (The Lion of Flanders) vs. van Petegem and Merckx vs. Verbeek. 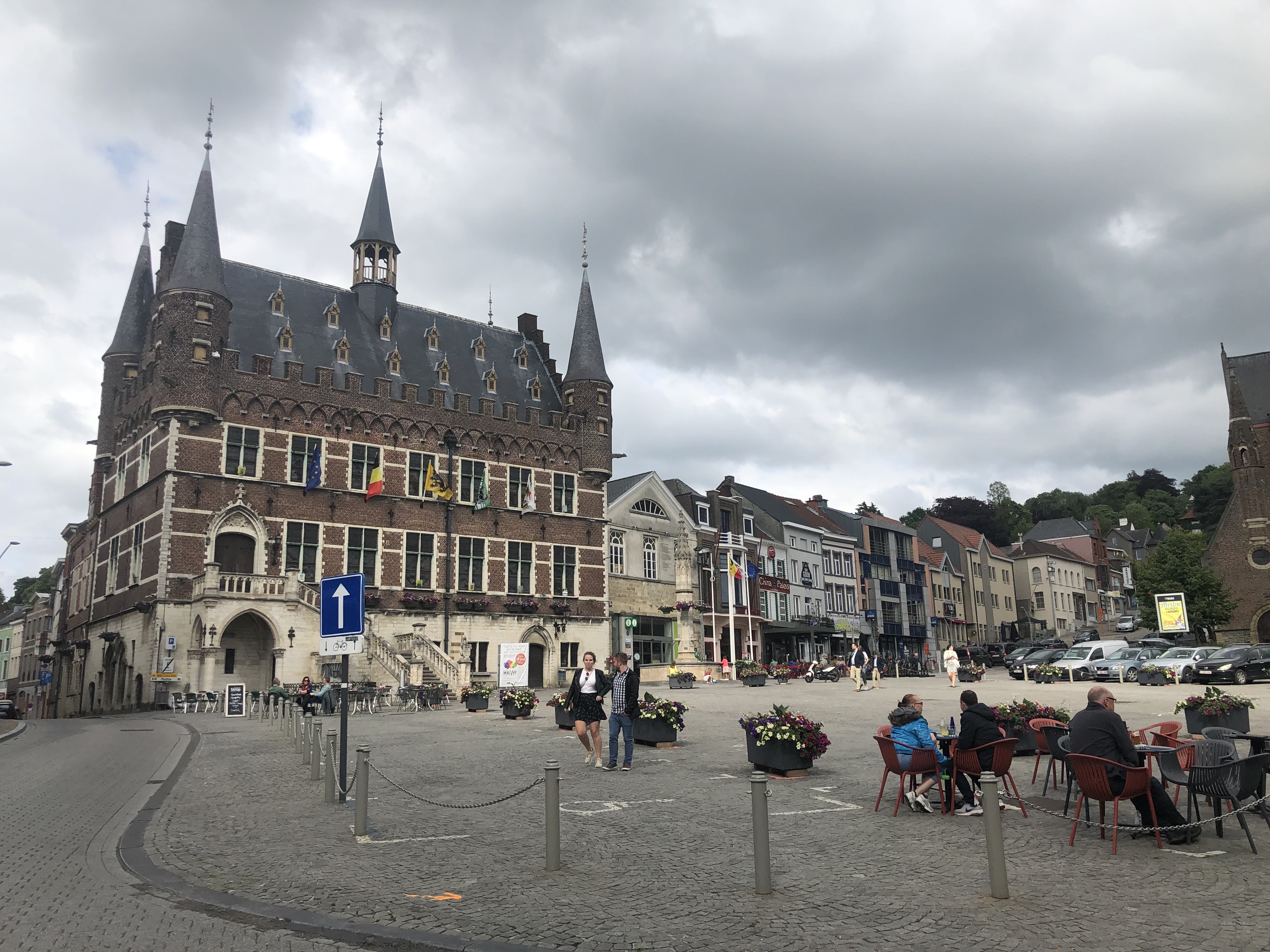 A different kind of challenge

In 2020 Remco Evenepoel from Deceuninck-QuickStep, at age 20, tackled the climb 50 times in one day, the day after riding the cancelled (due to the pandemic) 256km Liège Bastogne-Liège, instead of resting up. A challenge he set himself 'to keep himself busy'. The challenge took him eight hours. He explains what happened HERE with his mom as a perfect support team!

Before the organizers moved the finish back from Meerbeke to Oudenaarde, this was often where the pros won or lost the fight. Until 2011, it was the decisive part of the Tour of Flanders and the penultimate climb. After the removal of The Muur from the race back in 2012, there was an uproar: hundreds of fans staged a mock funeral on the climb's cobbled slope and carried a coffin to the summit. 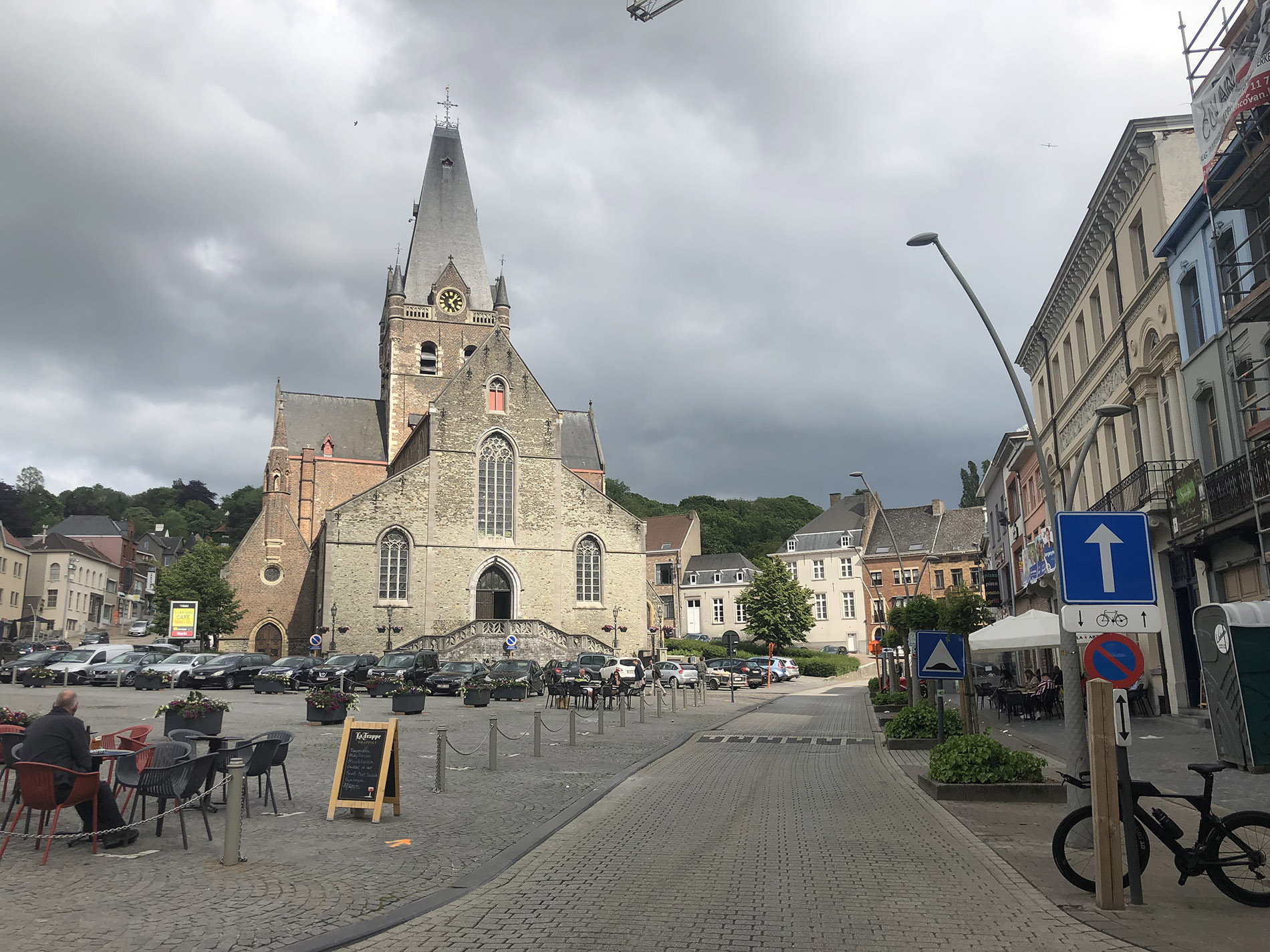 In 2017 the section was reinstated in the race, but 100km from the finish line. Then, in 2019, the race removed the Muur as local authorities were unwilling to pay for the race to visit the town, considering its proximity to the finish. In 2020 the race was shortened due to the pandemic, unfortunately omitting this historical piece from the race. Nowadays, one can see the pros fight it out here in Omloop Het Nieuwsblad and the Tour of Belgium, making sure that this iconic climb is still featured. The latest Omloop Het Nieuwsblad 2022 route saw riders race Kapelmuur 188km into the race ahead of the Bosberg climb, with the finish line just 10km further. 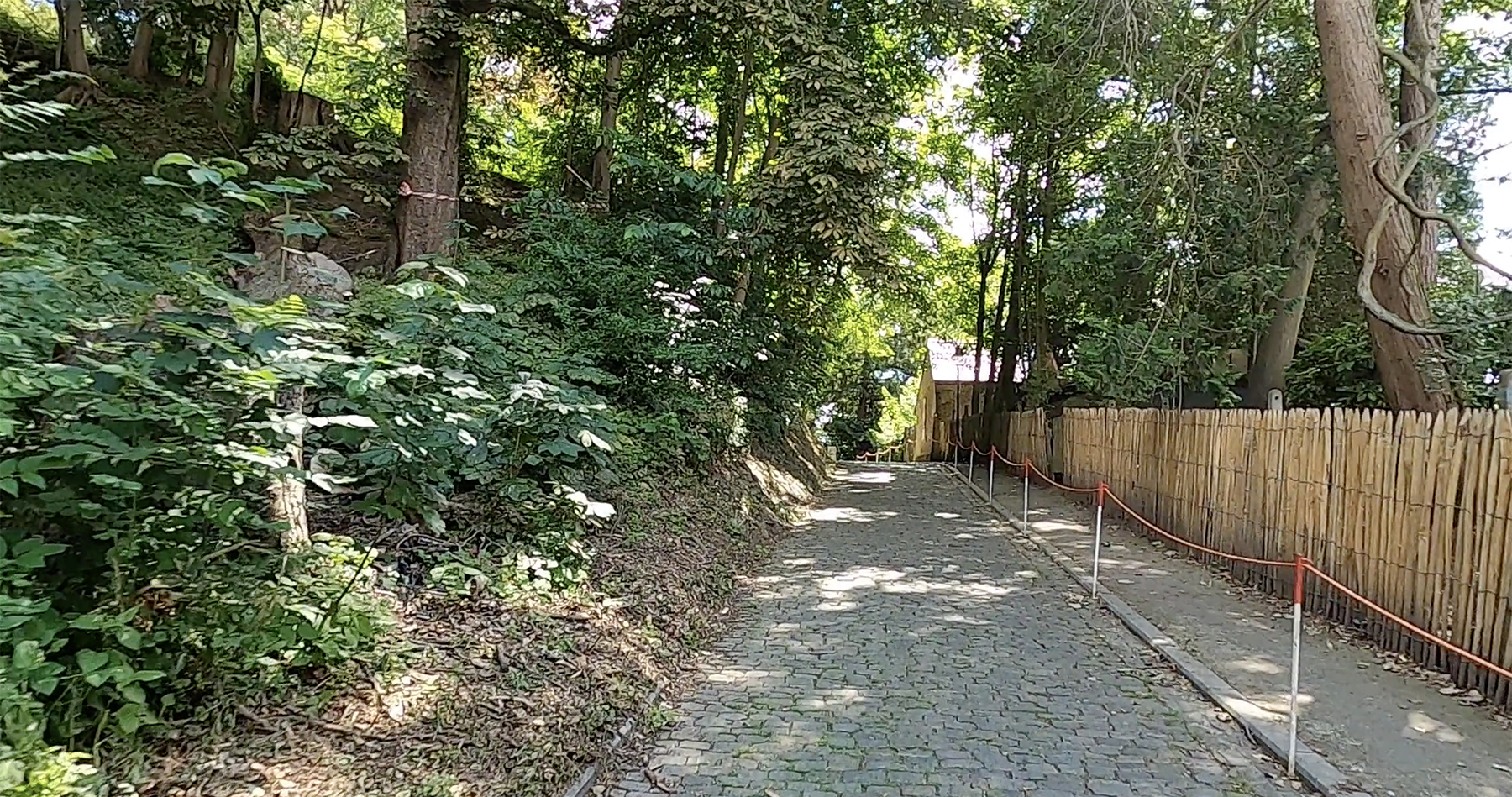 The gradient begins rising as you exit the centre of Geraardsbergen, starting initially on a wide and neatly packed cobbled street. As you reach the steps ahead of you and turn right, this is where the gradient begins to bite, and you have to power the pedals or come to a standstill, or fall over! This particular section narrows to the width of a car, and the cobbles become uneven and bumpy where traction is the issue apart from the steepness. The best technique is to stay seated in the saddle and power over them. The powerful and heavier pros will have more chance of making it over first, not the lightweight, more traditional climbers. It is the second most arduous climb of the Flemish Ardennes (after the Koppenberg). 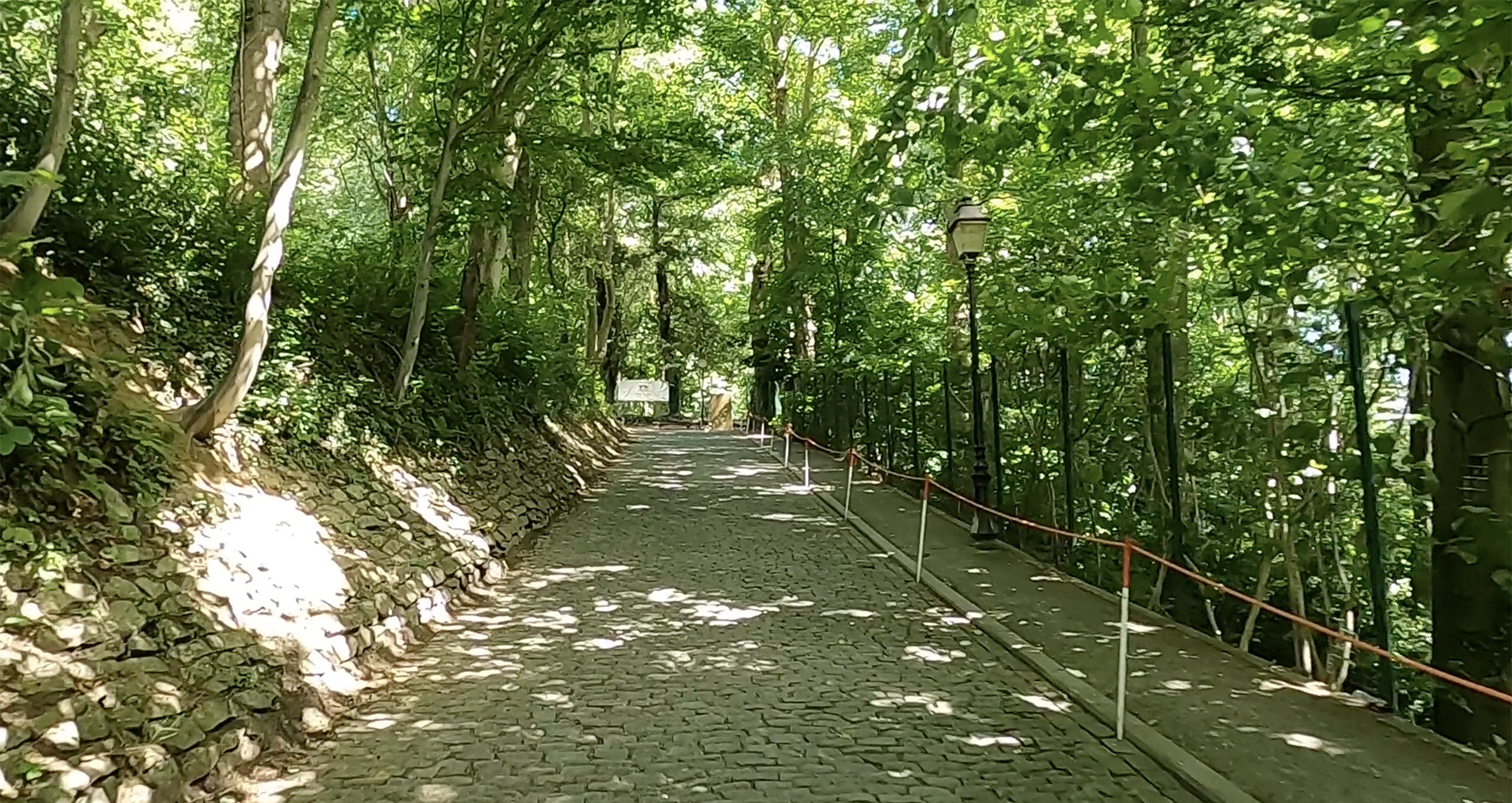 The central part of the climb is 750m metres long with an average gradient of 9%, and as the road curves, it reaches a maximum of 20%. After this steep section, the slope does decrease briefly. Take a look at what it's like from a casual rider's viewpoint on the bike. Once you reach the small chapel (Chapel of Our Lady of Oudeberg) at the summit, an important landmark in Belgian cycling, you'll know you have finally reached the top! 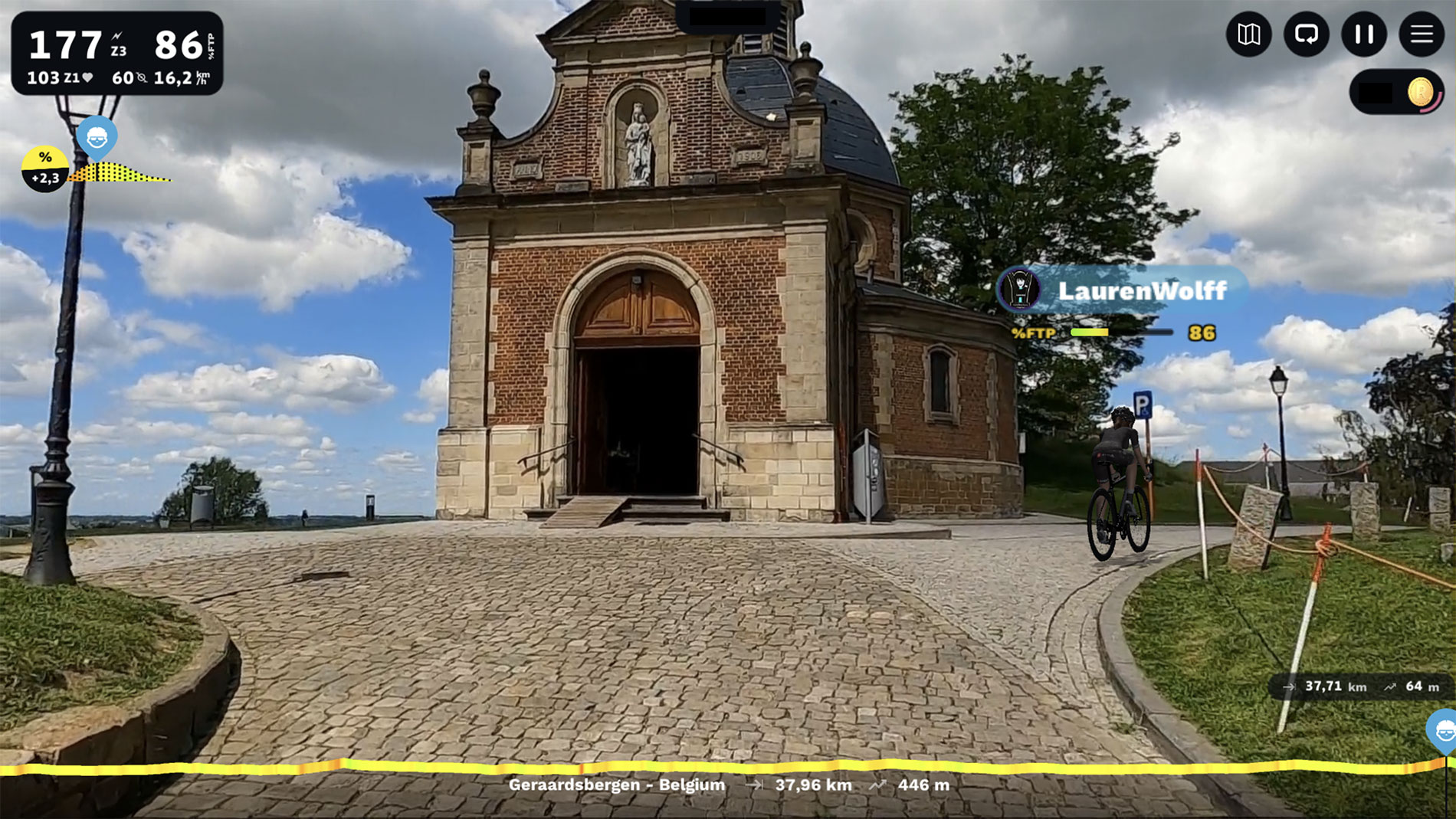 These stones were laid in a specific way many years ago on steep roads and were slightly offset at the front of the stone with a lip on the uphill part, like a wedge, to allow horses' hoofs to catch and avoid the animals sliding backward in the wet. This shape makes them hard to ride on and get a rhythm. When I rode this climb, even though I was on a full-suspension mountain bike, it felt as though the bones in my body became unhinged from their joints but it was an epic and memorable ride! Even though the bike was heavy, it was the benefit of a combined bit of power and smaller 'granny' gears that allowed me to get to the top, finally!

The ROUVY segment is over a distance of 38km, an average gradient of 1%, 446m of climbing and a rolling terrain. This is a course that you can power from start to finish or just ride it relaxed taking in the superb landscape and typical Flanders countryside ending in the historic Geraadsbergen town.

When you have finished the ride, treat yourself to a traditional beer and the famous delicacy of the area called the Mattentaart, as seen eaten by Remco at the end of his video, made with the milk from cows bred in Geraardsbergen. Smakelijk!

Here is the Strava KOM/QOM