The ŠKODA Velorace in Dresden (SVRD) is the most beautiful city cycling tour in Germany. The open virtual race on ROUVY invites everyone to discover the city from home and challenge former UCI World Champion Bert Grabsch this weekend, June 27.

The circuit with its unique and charming flair in the heart of the state capital Dresden makes the Dresden Everyman Cycling Race one of the largest, most fascinating cycling events in the Saxon metropolis. The unique atmosphere along the 21 kilometers "Around the Dresden Frauenkirche" with route highlights such as the Dresden Semperoper, the Zwinger, the Waldschlösschenbrücke and the Elbauen with the well-known Elbe castles and the Brühlsche terrace make it an incredible sporting challenge. In the action-packed laps over the 3 distances of 42, 62 and 103 kilometers through the city center of Dresden, everything is possible - it could only be a personal best or it could simply be the pure joy of having made it.

Dresden is one of the most popular destinations in Germany. The centuries-old fascination for this attractive city of Dresden combines the Velorace with the newly discovered passion of eCycling World and offers it as an opportunity for a unique cycling experience via ROUVY. ROUVY, the digital cycling partner of ŠKODA Velorace Dresden, and the organizers of the event have joined forces to make this outstanding event accessible to cycling enthusiasts from all over the world with the new Race Edition 2020-21.

The two partners are today announcing a virtual version of the ŠKODA Velorace that is very similar to the original version, which will take place on 27 June. Thanks to rouvy's 1:1 simulations, both professionals and amateurs can ride digitally to victory in the first E-Race of the Velorace Dresden on two of the city laps (42 kilometers). The riders meet online and try to challenge the former UCI World Champion and multiple German Champion in the ITT, Bert Grabsch. The SVRD gives a junior rider of the home club Dresdner Sportclub 1898 the chance to be part of the race on ROUVY. The 18-year-old Paul Fassbender was able to enjoy the victory at the fourth round of the "GCA eSport League" in the junior section in February. Among all participants, giveaway packages will be raffled, the winners will be selected from random draws.

Ronald Friedemann from the event team sees the cooperation between SVRD and ROUVY as a special moment in the young history of the ŠKODA Velorace Dresden and as a warm-up for the next live ŠKODA Velorace Dresden. "We very much hope that the many cyclists, professionals and hobbyists, all those who are interested in cycling will use our SVRD digitally for their preparations. We also believe that the eRace is a good business card and will arouse great interest in visiting Dresden and participating in the next ŠKODA Velorace."

The course on ROUVY

The race track on ROUVY will be held over 2 city laps, i.e. 42 flat and fast kilometers. The route will have a 1:1 branding of the start and the destinations as well as other real objects.

In this way, the riders can experience the atmosphere of realistic presence as at the actual event. The track is now open and ready for Sunday's race.

Registration for the race, which starts on Sunday at 9:30 a.m. CEST, is now free and open. 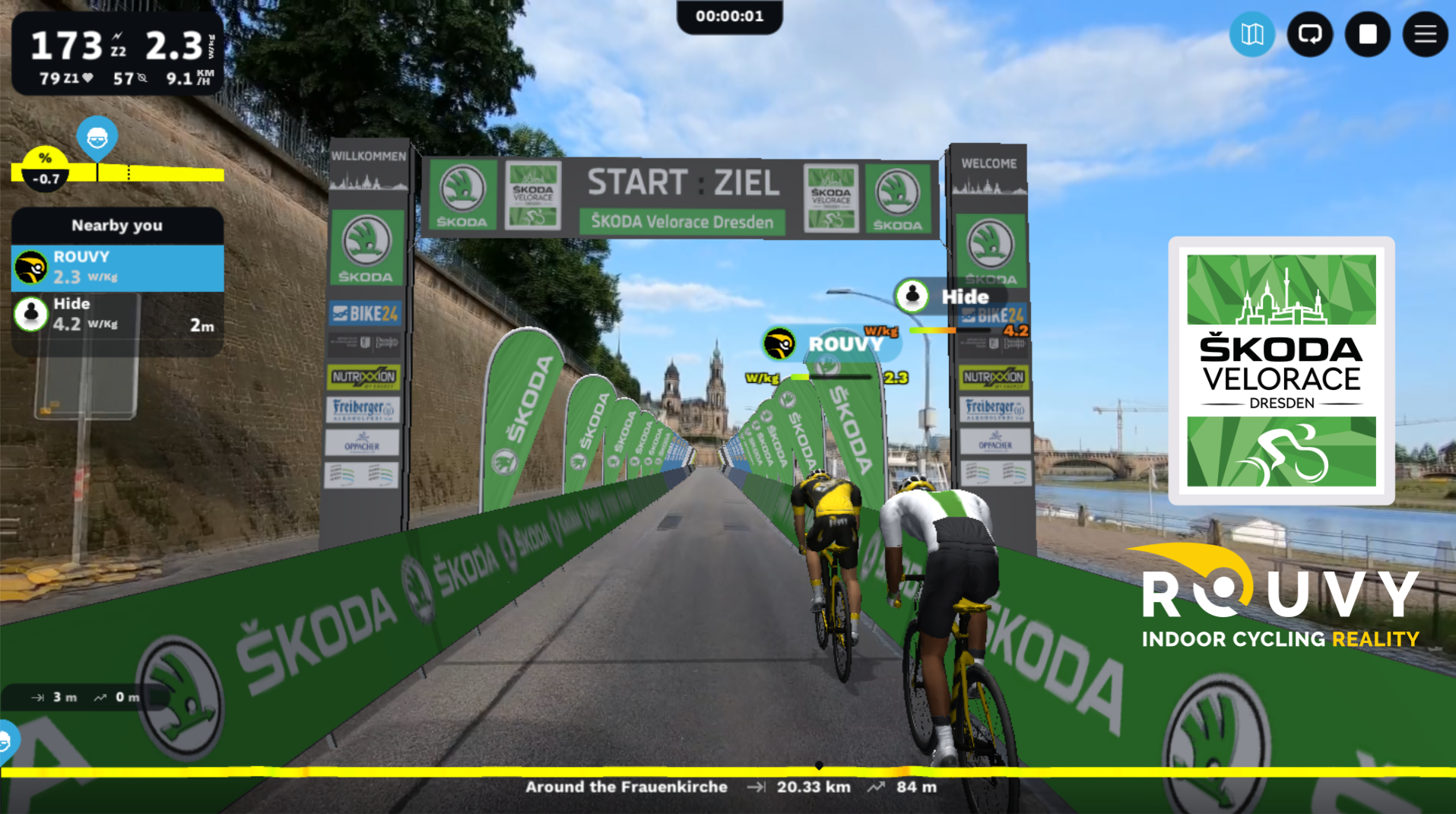 About the ŠKODA Velorace Dresden

Since 2013, the "ŠKODA Velorace Dresden" has established itself as one of the most traditional "everyman" cycling races in the new federal states.

The organizers of the saxon national tour with the UCI category 2.1, the Sachsen-Tour International, 1985-2009, have regularly welcomed thousands of participants since 2006 to the everyman race in and around Dresden.

The cycling events have been deeply rooted in Dresden and Saxony since 1985. Known as "Dresden Race Day" until 2012, the race was restarted in 2013 with the concept of the inner-city course "Rund um die Frauenkirche" as "ŠKODA Velorace Dresden". And since then, hundreds of thousands of spectators have celebrated this cycling festival with a wide program that also includes children, on and along the route. This is thanks to the dedicated support of the cycling promoter ŠKODA and the city of Dresden, to name just a few of the important partners of the past and present.