THE "TOUR DE OKINAWA" EXTENDS VIRTUALLY WITH ROUVY, ENABLING CYCLISTS TO RACE ON THE ROADS OF THE TOUR FROM THEIR HOMES

Nago, Okinawa, Japan / February 22, 2021 - The Japanese annual event of "Tour de Okinawa" has partnered with ROUVY to release 3 of its Tour routes for immersive, augmented virtual cycling experience. To highlight the occasion, a  1-month Challenge has been announced for cyclists worldwide to try out and enjoy the Okinawa island routes along the Pacific coastline. And the Challenge also provides a chance to win the original branded merchandise. The ROUVY app provides not just great workouts for athletes but also the unique opportunity for them to visit exotic cycling locations online which otherwise they might not ever visit in their real lives.

The "Tour de Okinawa" has been held since 1989 in 12 municipalities, centered in the northern part of Okinawa Prefecture also known as Yanbaru. The Tour was initially started as an amateur race but turned professional in 1999. It became part of the UCI Asia Tour in 2005. New categories of events were added to meet the needs of the growing number of participants every year; and now it is one of the largest cycle sports festivals in Japan. The "Men's Champion Race" is positioned as an official race of the UCI and top racers from both, home and abroad, participate every year in a hot battle to win the last race of the year in Japan.

The "Citizen’s Road Race" is another race that runs the same course as the Men's Champion Race, but is aimed at the general public with a 210km long stretch. And there is also a ‘Challenge Race’, for those who have little experience in competitions, such as the 140km, 100km and 50km categories. Additionally, there are other, new formats that cater to different interests such as the "Touring Around Okinawa Island Course", which rides on the main island of Okinawa in 1 night and 2 days, the "Family Cycling", the "Cycling on Remote Islands" and many more.

The NPO “Tour De Okinawa” Association has partnered with ROUVY to make the Okinawa racing experience accessible globally to everyone. Thanks to ROUVY’s unique technology that enables augmentation of geo-synced videos, athletes owning a trainer are able to travel virtually and ride along the most distant and beautiful locations on the planet. Today, Tour de Okinawa releases 80kms of its awesome Tour segments from the Pacific island of Okinawa featuring the picturesque coastline of the Sea of Japan! These routes include rides through the famous locations of Churaumi, Yanbaru and Ti-da. They are definitely worth a visit in real life, one day!

Prizes for those who complete the Challenge include original cycling jerseys, original T-shirts and stickers.

The Challenge and routes are live and open for exploration and registration here. 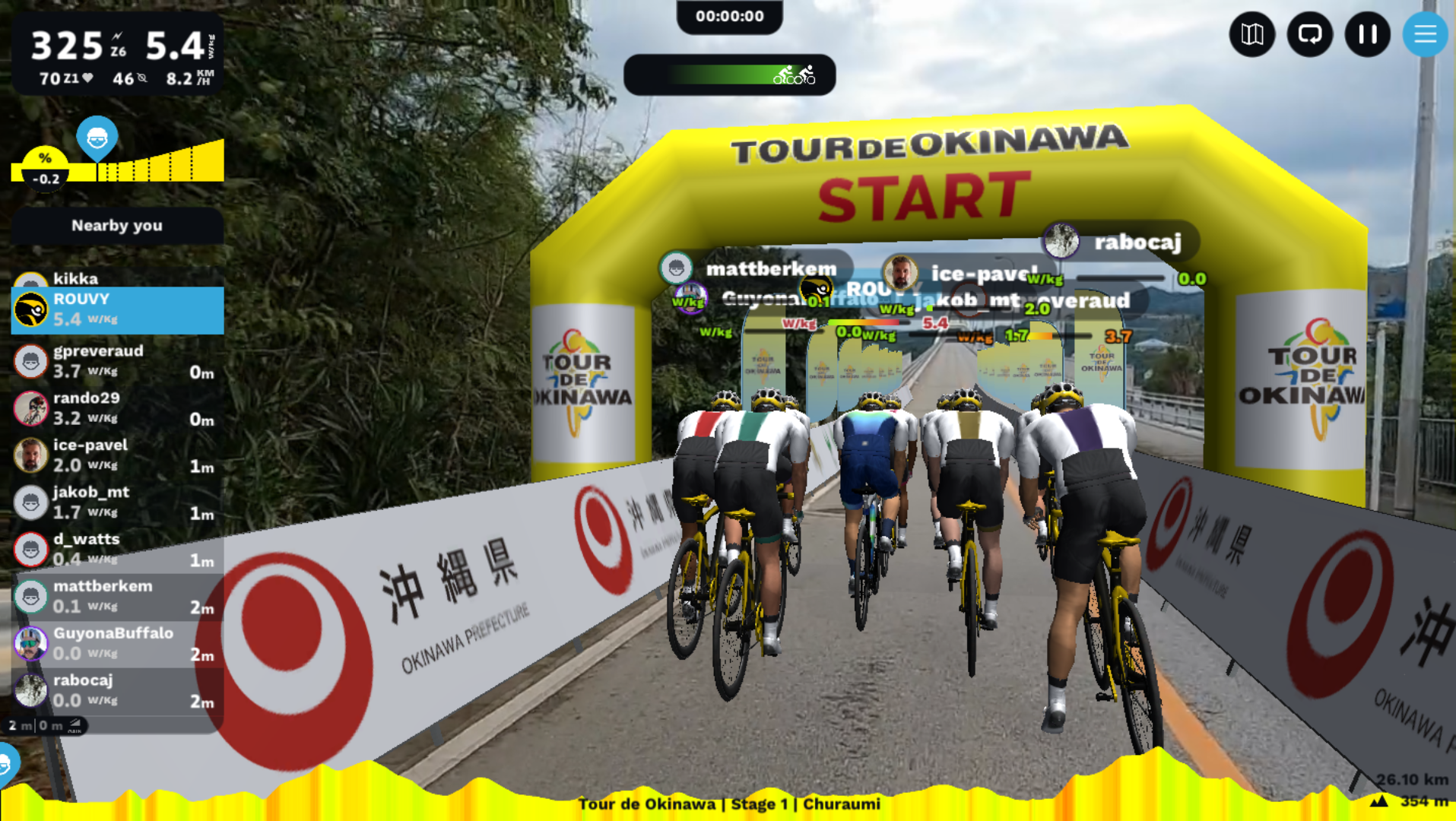 The "Tour de Okinawa" has been held since 1989 in 12 municipalities (Nago City, Motobu Town, Nakijin Village, Ogimi Village, Kunigami Village, Higashi Village, Ginoza Village, Onna Village, Kin Town, Ie Village, Izena Village, Iheya Village) centered in the northern part of the Okinawa Prefecture also known as Yanbaru. Yanbaru is home to precious wildlife that include endangered species in their natural environment, unique to the subtropical climate. The Tour was initially started as an amateur race but turned professional in 1999. It became part of the UCI Asia Tour in 2005.

ROUVY is a digital racing platform that brings the experience of real-life cycling competitions to your home. ROUVY offers thousands of exciting virtual roads to travel the world online or to compete with friends. Overlaying 3D avatars over the geo-synced video footage, ROUVY makes home training both realistic and fun. Cycling enthusiasts and the most demanding athletes are welcome to cycle the world from their own homes to stay fit or to get ready for the next race! www.rouvy.com